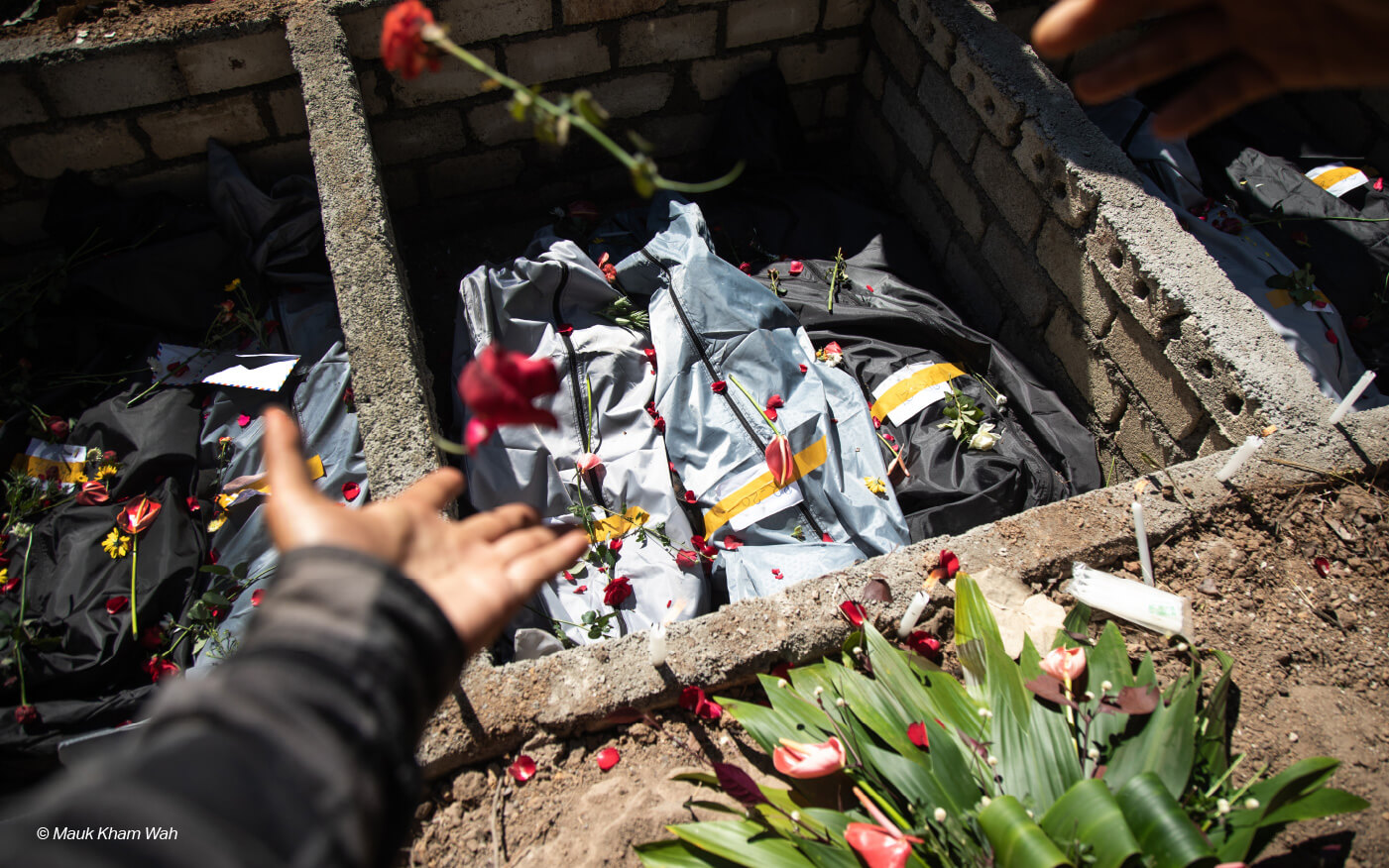 (BANGKOK, February 15, 2022)—The Myanmar military massacred civilians, used human shields, and committed other atrocities in Karenni State in acts that may amount to war crimes, said Fortify Rights in a new flash report published today. Fortify Rights recommends that member states of the Association of Southeast Asian Nations (ASEAN) support the establishment of a U.N. Security Council-mandated global arms embargo to prohibit the sale of weapons and dual-use technology to the Myanmar military junta.

ASEAN foreign ministers are due to meet for their annual retreat this Wednesday.

“The Myanmar junta is murdering people with weapons procured on the global market, and that must stop,” said Ismail Wolff, Regional Director at Fortify Rights. “Clear and definitive action is needed to compel the Myanmar junta to rethink its attacks on civilians. The U.N. Security Council must urgently impose a global arms embargo on the Myanmar military, and it would be strategic and sensible for ASEAN to support it.”

The 36-page flash report, entitled, “Ongoing War Crimes in Karenni (Kayah) State, Myanmar: May 2021 to January 2022,” documents information related to the murder of at least 61 civilians in Karenni State by the Myanmar military.

The report includes additional details surrounding the “Christmas Eve massacre” near the village of Moso in Hpruso Township, Karenni State, where the Myanmar military killed at least 40 civilians, including a child and two humanitarians working with Save the Children, on December 24, 2021.

A medical doctor in Myanmar—name withheld for security—who conducted autopsies on bodies retrieved from the massacre site told Fortify Rights that autopsies were not possible on many of the bodies because they were so thoroughly burned. However, he and another doctor identified at least 31 bodies, including five bodies of women and one girl under the age of 15.

“Some had their mouths stuffed with cloth, so we were pretty sure these people were gagged,” the doctor told Fortify Rights. “Almost every skull was fractured and badly cracked . . . [In some bodies], we could gather enough evidence to say they were burned to death alive.”

The flash report draws on firsthand testimony from 31 eyewitnesses, survivors, internally displaced persons (IDPs), religious leaders, humanitarian and civil-society workers, members of armed resistance groups, and others between May 2021 and January 2022. Fortify Rights obtained and reviewed photographic and video evidence of atrocities and internal files and documentation from humanitarian agencies and ethnic armed organizations operating in Karenni State.

In December 2021 and January 2022, the military junta intensified its attack on civilians in Karenni State, murdering men, women, and children, bombing civilian-populated areas, and using heavy artillery, arson, and airstrikes against civilian targets. These violations were committed in the context of armed conflict between the Myanmar military and several ethnic armies and People’s Defense Forces (PDFs)—community-led militias established for self-defense and to resist military rule in the aftermath of the coup d’état on February 1, 2021.

“The soldiers put their guns on our shoulders and shot PDFs, staying behind us,” the man told Fortify Rights, his name withheld for security. “We were kept tied up and blindfolded. We were tortured a lot, in so many ways. They kicked our bodies, hit our heads with gun handles, and more.”

The military junta’s attacks since the coup forced the displacement of an estimated 170,000 civilians in Karenni State, or more than half of the state’s estimated population of 300,000, according to the Karenni Civil Society Network. According to the U.N. High Commissioner for Refugees (UNHCR), national internal-displacement figures “reached a new high of 441,500” people displaced since the coup, with approximately 91,900 displaced in Karenni State and 56,200 displaced in neighboring southern Shan State as of January 31, 2022. UNHCR previously noted that “[a] substantial proportion of Kayah [Karenni] State’s 300,000 population is now displaced.”

The Myanmar military’s forced displacement of civilians threatens to become protracted given the continued attacks on towns and villages and destruction and damage to civilian homes and properties, said Fortify Rights.

The Geneva Conventions primarily define the laws of war, providing fundamental rules to regulate the conduct of armed conflict. The Myanmar military’s murder, forced displacement, and other attacks on civilians in Karenni State constitute severe violations of international humanitarian and human rights law and may amount to war crimes, said Fortify Rights.

In a joint statement released on the anniversary of the February 1 coup, the European Union and foreign ministers of nine U.N. member states, including Canada, Norway, the United Kingdom, and the United States, urged the international community to hold the perpetrators of human rights violations in Myanmar accountable for their crimes and for countries to end the sale of “arms, materiel, dual-use equipment, and technical assistance” to the military junta.

Since February 2021, the U.N. Security Council has issued four press statements and one presidential statementexpressing various levels of condemnation of violence in Myanmar, with no discernable effect. The military junta in Myanmar has repeatedly flouted the Security Council’s directives, providing a context for heightened action from the council, such as an arms embargo, said Fortify Rights.

The junta has also failed to honor ASEAN’s “Five Point Consensus” on the situation in Myanmar, adopted by consensus in April 2021, which includes provisions for the “immediate cessation of violence” and a commitment for all parties to exercise “utmost restraint.”

ASEAN reportedly declined to invite the junta’s foreign minister to this week’s meeting and instead invited Myanmar to send a “non-political representative.” The bloc previously postponed a meeting in January, reportedly due to disagreement over whether to invite a junta representative.

“The junta is not a government; it’s a criminal enterprise and doesn’t belong at the ASEAN table,” said Ismail Wolff. “It would be dangerous for ASEAN to give Min Aung Hlaing and his junta any political legitimacy.”

The report recommends that the U.N. Security Council pass a resolution mandating a global arms embargo to prohibit the sale of weapons and dual-use technology to the Myanmar military junta. Further, it calls on the U.N. Security Council to refer the situation in Myanmar to the International Criminal Court and to deny the Myanmar military access to funds, especially revenue generated from the sale of natural gas—the junta’s single largest source of income.

The report calls specifically on member states of ASEAN to play a more significant role in these efforts, including engaging the NUG on solutions, providing it with material support, and supporting the establishment of a global arms embargo against the military junta.

ASEAN states are not significant suppliers of arms to the Myanmar military but routinely deal with the political, economic, and humanitarian fallout from the military’s attacks on civilians, said Fortify Rights.

“The Myanmar military has posed a threat to international peace and security for decades, including by committing genocide with impunity against Rohingya Muslims as well as crimes against humanity and war crimes against other ethnic nationalities,” said Ismail Wolff. “An arms embargo is crucial to help end these atrocities, and it would be strategic for ASEAN on several levels. Urgent action is needed now.”