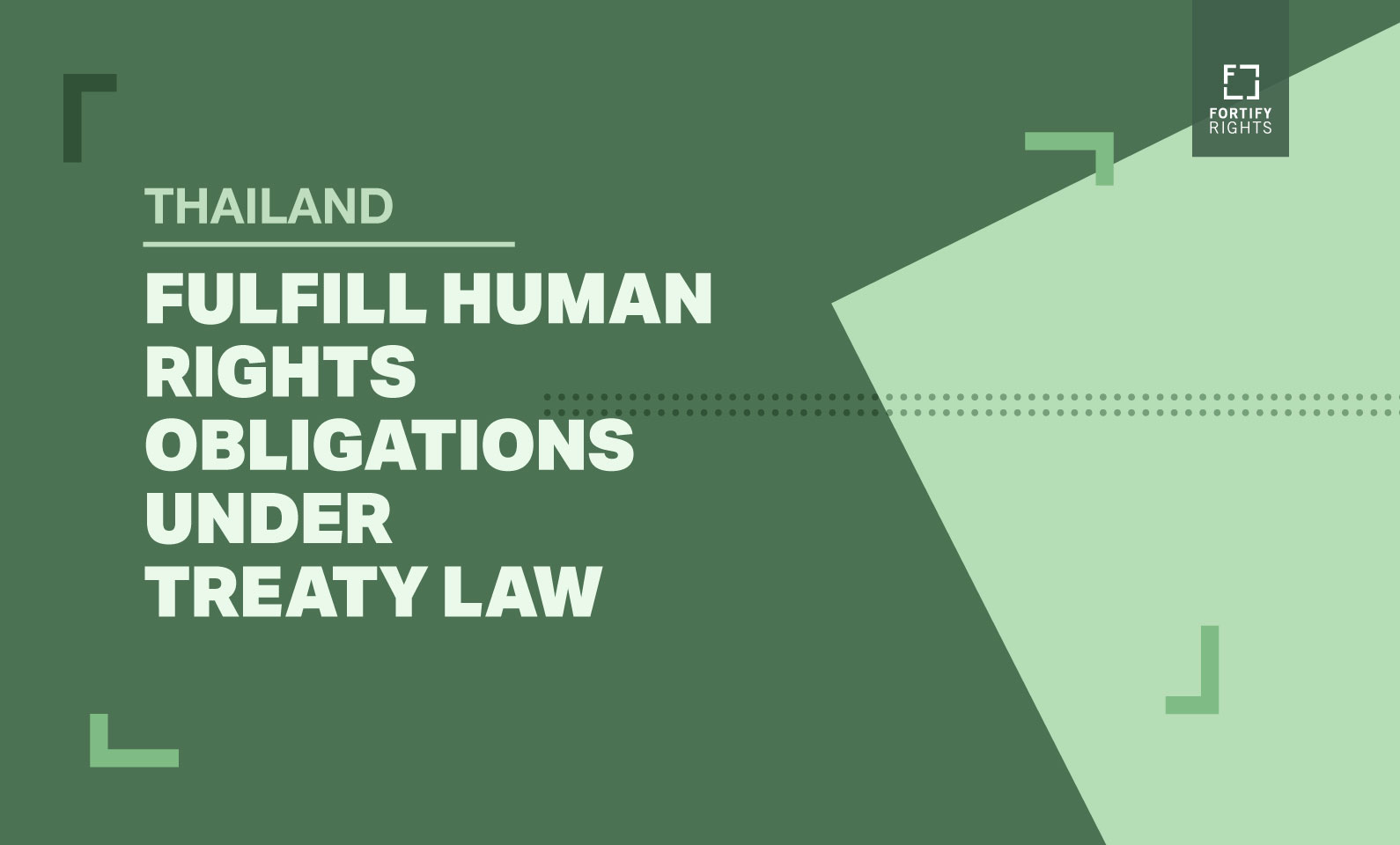 Thailand submits progress report to U.N. on compliance with civil and political rights

(Bangkok, July 31, 2018)–Thai authorities have yet to address major gaps in human rights protections, including the separation of families by detaining refugees and the failure to protect human rights defenders, said Fortify Rights in a submission to the United Nations this month.

Thailand is a state party to the International Covenant on Civil and Political Rights (ICCPR), which protects the rights of children. On April 25, 2017, the U.N. Human Rights Committee—a body of independent experts responsible for monitoring state compliance with the ICCPR—issued more than 30 recommendations to the Government of Thailand to comply with the ICCPR, including the development of “alternatives to detention” to reduce overcrowding.

In its response to the U.N. Human Rights Committee this month, the Thai Government did not address the need for “alternatives to detention” and responded to the Committee by simply claiming that immigration detention facilities “do not face overcrowding.” Thailand did not address the continued detention of children or refugees in Thailand.

Fortify Rights submitted a report to the U.N. Committee on July 17, 2018, noting that the Immigration Bureau implemented a pilot program to remove 11 children from Suan Phlu Immigration Detention Center (IDC) in Bangkok. Fortify Rights raised concern that the authorities implemented this program without proper procedures to safeguard the rights of the children and reported that it resulted in the separation of children from their parents, whom remain in detention. The children are now living in privately-run shelters and have been separated from their parents for more than one year. The Thai government is currently in the process of developing further agreements with private shelters to extend the pilot program.

The children and their parents are recognized as “persons of concern” by the U.N. High Commissioner for Refugees. However, Thailand’s Immigration Bureau continues to detain refugees as a matter of policy.

Under international law, refugees and children should never be detained solely based on their or their parent’s immigrant status. Thai authorities should release all refugees from detention, including children with their parents, said Fortify Rights.

When it issued its recommendations to the Government of Thailand, the U.N. Committee requested a progress update in one-years’ time. In addition to immigration detention, the Committee requested updates about provisions in Thailand’s constitutional and legal framework that infringe on human rights protections. The Committee also requested more information on extrajudicial killings, enforced disappearances and torture, and conditions of detention. Upon request, the Thai government received an extension to submit its update.

On July 17, 2018, Fortify Rights submitted information to the Committee regarding Thailand’s performance in implementing the Committee’s recommendations during the past year, finding continuing gaps in Thailand’s efforts to fulfill its legal obligations under the ICCPR.

In particular, Fortify Rights found that the 2017 Thailand Constitution limits access to effective remedies, fosters impunity, and arbitrarily restricts rights protected by the ICCPR, including sections 44, 47, and 48. In its progress report to the Committee, Thai authorities defended these provisions as necessary “for the reform of the country” and “to foster a stronger sustainable democracy and to restructure the economy.” Such justifications are not considered legitimate aims under international law.

In its report to the U.N. Committee, Fortify Rights documented how human rights defenders and those exercising their rights to free speech and peaceful assembly continued to face arbitrary arrest, detention, and criminal prosecutions under orders and announcements issued by the National Council for Peace and Order (NCPO), the self-appointed military government of Thailand.

The Thai government did not adequately address these concerns in its own report to the U.N. Committee, Fortify Rights said.

Moreover, Fortify Rights noted little progress during the past year in cases of torture and other ill-treatment, extrajudicial executions, and enforced disappearances beyond the issuance of directives to develop a National Committee for Managing Cases Relating to Torture and Enforced Disappearance and a National Justice System Reform Plan to improve access to effective remedies.

Although the government recently announced on July 2 its intentions to investigate the April 2014 disappearance of environmental and indigenous rights defender Mr. Porlajee “Billy” Rakchongcharoen, justice remains elusive for his family and other human rights defenders.

In March 2017, the U.N. Human Rights Committee reviewed the Government of Thailand’s compliance with the ICCPR. The ICCPR is a core instrument of international human rights law. As a state party to the ICCPR since 1996, Thailand is legally bound to uphold rights enshrined in the instrument.

During the 2017 review process, Fortify Rights published a 38-page report A Work in Progress: Thailand’s Compliance with the International Covenant on Civil and Political Rights, highlighting violations against human rights defenders, survivors of human trafficking, and refugees. The report documents killings that took place with impunity, arbitrary detentions, unchecked attacks and reprisals against human rights defenders, violations of free speech and assembly, human trafficking on an epidemic scale, and the forced return and other serious violations against refugees. The report draws on research conducted by Fortify Rights between 2014 and 2017, including in-depth testimony from eyewitnesses and survivors of human rights violations in Thailand.