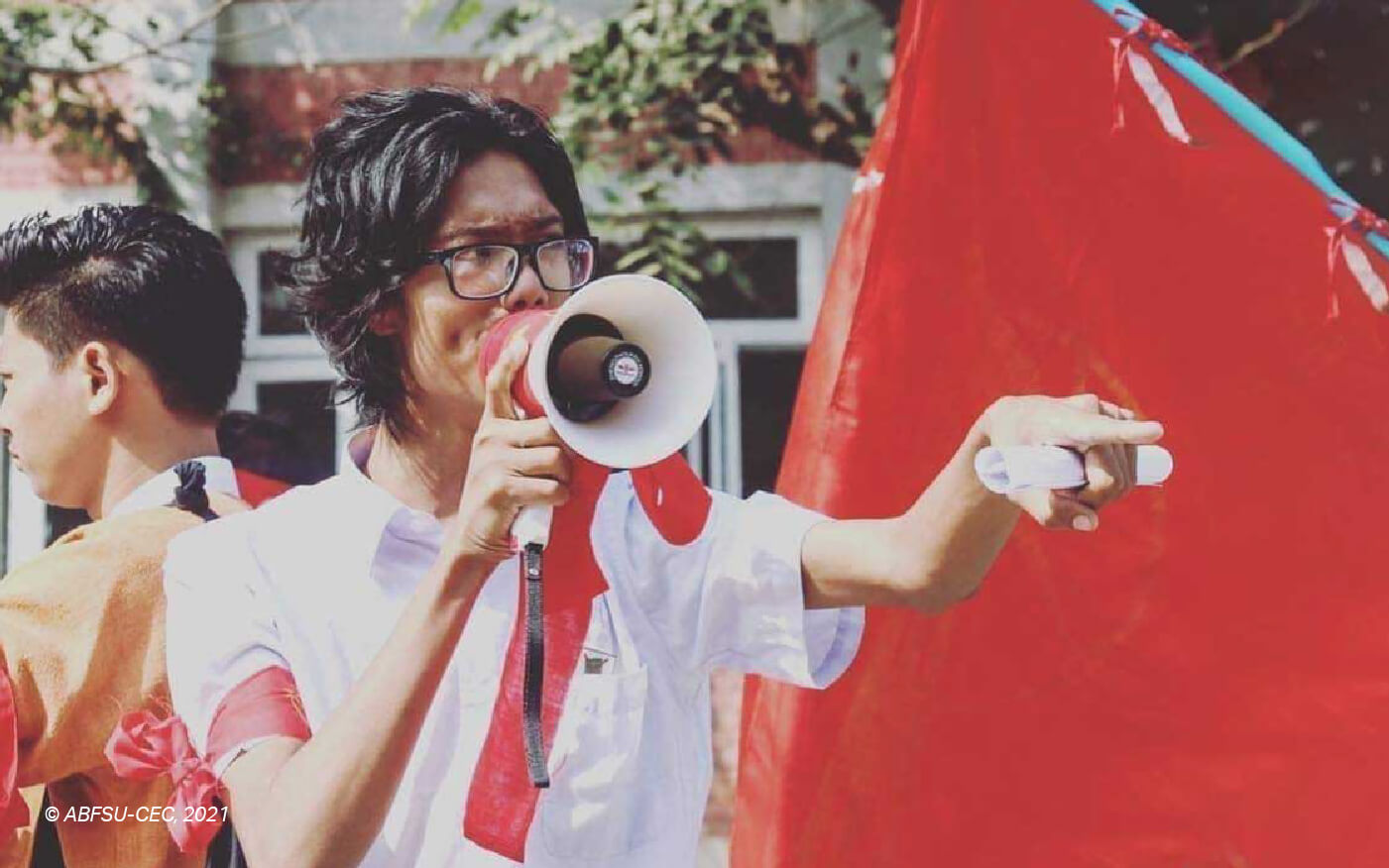 Phone Myint Kyaw is the 21st student activist arrested since September 2020 as part of a months-long crackdown on peaceful anti-war protesters. Police filed criminal complaints against at least 32 students for their participation in a campaign to protest the ongoing war between the Myanmar military and the Arakan Army—an ethnic armed group.

“Phone Myint Kyaw should not be in prison and should be released immediately along with the dozens of other imprisoned student activists,” said Ismail Wolff, Regional Director at Fortify Rights. “The detention of peaceful protesters contravenes the rights to freedom of expression and peaceful assembly.”

Of the at least 32 activists facing criminal charges for their involvement in the protests in Mandalay and elsewhere across the country in September and October of 2020, the Myanmar authorities have detained 20 and convicted ten activists. At least seven activists are currently in hiding, and arrest warrants are pending against four others.

Phone Myint Kyaw and at least ten other protesters are currently detained in Obo Prison in Mandalay Region.

Phone Myint Kyaw earlier reported being beaten by guards in Obo Prison after authorities detained him for more than 80 days for his role in peaceful protests calling for greater security measures for students at Yadanabon University in Mandalay Region in December 2018. Fortify Rights and Athan documented the earlier arrest, detention, and torture of Phone Myint Kyaw  and other ABFSU members in the April 2020 joint report entitled, “Our Demands are for All Students:” Violations of Students’ Rights in Mandalay, Myanmar.

“I was beaten up by seven guards,” Phone Myint Kyaw told Fortify Rights in 2019. “I was beaten with sticks. They had a special stick that is coiled with a wire—they hit me with it. They punched me in the head. I was kicked.”

The current criminal complaints against Phone Myint Kyaw relate to the distribution of material with slogans saying, “Oppose murderous fascism” and “Dictatorships must fail” and calling for the government to lift mobile-internet restrictions in Rakhine and Chin states.

In October and November of 2020, four courts in Mandalay Region convicted ABFSU Central Executive Committee members Kyaw Thiha Ye Kyaw and Soe Hla Naing of multiple charges under sections 505(a) and 505(b) of the Myanmar Criminal Code and the Peaceful Assembly Law for their role in organizing the anti-war campaigns. The two both face a cumulative sentence of more than seven years’ imprisonment. They also face additional charges before these courts. They are currently detained in Obo Prison in Mandalay Region.

In a joint statement released in November 2020, Fortify Rights, Article 19, and eight other human rights organizations called on the Myanmar authorities to end the crackdown on human rights defenders and peaceful protesters.

Section 505(a) of the Myanmar Criminal Code prohibits anyone who “makes, publishes or circulates any statement, rumor, or report” with the intent or likelihood to cause a member of the military “to mutiny or otherwise disregard his duty.” Section 505(b) similarly prohibits expressions intended or likely to cause “fear or alarm” among the public or induce others to “commit an offence against the State or against the public tranquility.” Punishment under these sections includes up to two-years’ imprisonment and/or a fine.

The Peaceful Assembly Law provides a maximum penalty of up to three months in prison and/or a fine of up to 30,000 Myanmar Kyat (about US$23) for failing to give advanced notice to the authorities when organizing an assembly.

Moreover, the requirement under Myanmar’s Peaceful Assembly Law that protest organizers notify authorities in advance or face criminal charges is incompatible with international law. The U.N. Human Rights Committee has held that imposing criminal penalties, including fines and imprisonment, for holding a peaceful assembly is incompatible with human rights law.

“State Counselor Suu Kyi and her party have a majority in parliament and could swiftly amend any number of laws to bring them in line with the government’s human rights obligations,” said Ismail Wolff. “The Myanmar government should take this opportunity to release all political prisoners and work to deliver on its promise of human rights.”