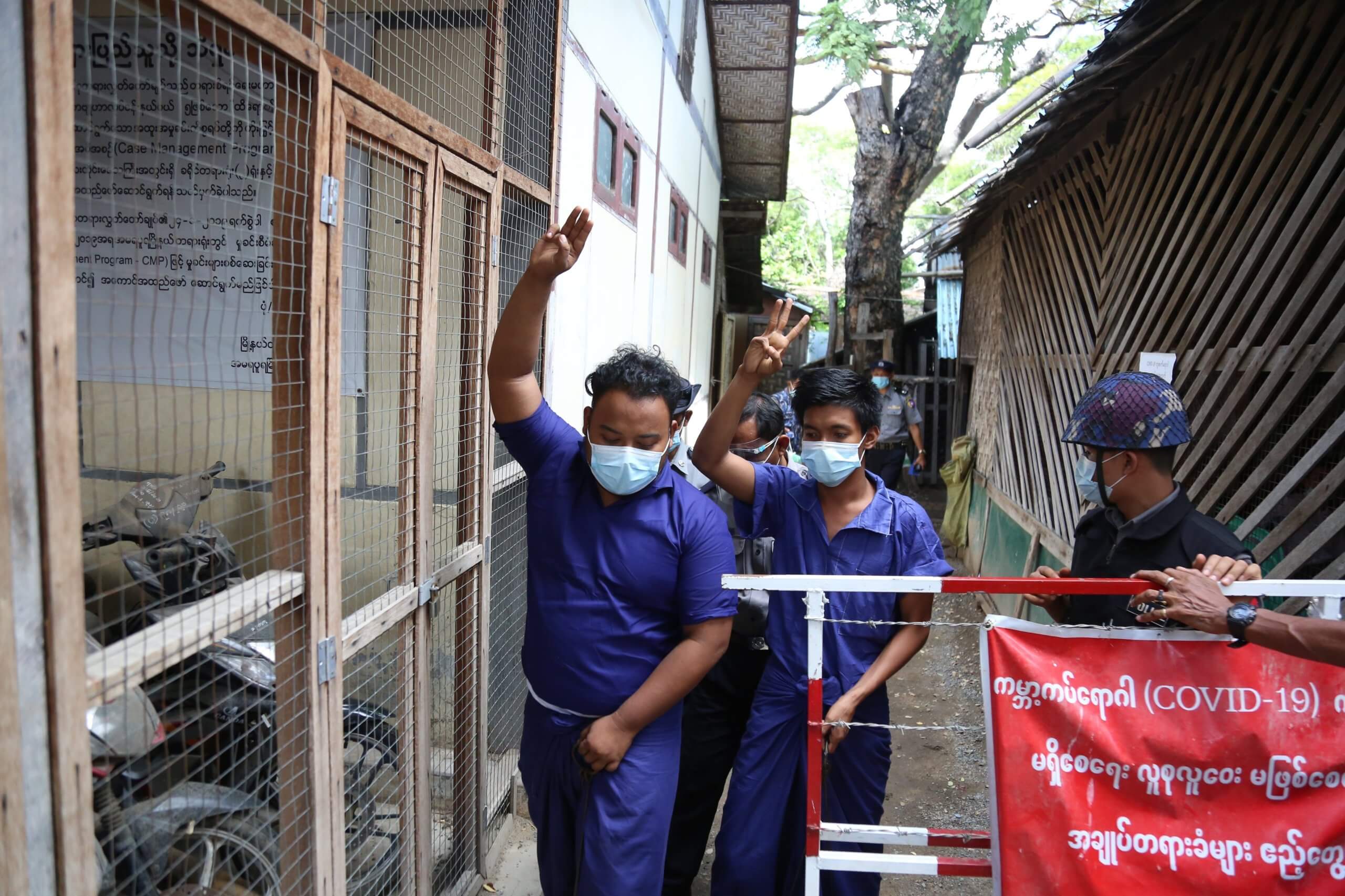 15 anti-war protesters arrested, some sentenced to five years in prison, many in hiding

(YANGON, October 19, 2020)—Myanmar authorities should immediately end an ongoing crackdown against peaceful anti-war protesters, said Fortify Rights today. Since September 11, Myanmar authorities arbitrarily detained 15 human rights defenders, including 14 members of the All Burma Federation of Student Unions (ABFSU), for protesting the government and the ongoing war in Rakhine and Chin states. Between October 2 to 9, courts in Mandalay Region sentenced two ABFSU members to five years in prison, one to one year in prison, and another to one month with hard labor, all for their involvement in legitimate, peaceful activities.

On October 20 and 21, courts in Mandalay Region are scheduled to consider additional charges against Kyaw Thiha Ye Kyaw, 24, and Soe Hla Naing, 23—the two aforementioned ABFSU members already sentenced to five-year prison terms. At least nine of the other detained protesters are scheduled to appear before the Chan Aye Thar-Zan Township Court in Mandalay on October 22.

“There is a coordinated crackdown against peaceful protesters unfolding right now,” said Ismail Wolff, Fortify Rights Regional Director. “The crackdown is aimed at incapacitating and silencing human rights defenders and student activists. The charges should be dropped, and the Myanmar Government should free all political prisoners immediately.”

The four convicted ABFSU members and at least four of the other detained protesters are currently imprisoned in Obo Prison in Mandalay Region. According to ABFSU—a nationwide student organization with a long history of political activism—at least 16 of its members are currently in hiding.

The arrests appear to be in response to an anti-war leafletting and poster campaign launched by ABFSU in Mandalay in early September. For example, on September 11, the day after protesters distributed anti-war material in the Zay Cho Market, Yadanabon University, around the Mandalay moat, and elsewhere in Mandalay, Chan Aye Thar-Zan Township police in Mandalay briefly detained and charged ABFSU member Myo Chit Zaw, 21, and filed charges against 12 others for failing to notify the authorities in advance of the September 10 protest. Two days later, on September 13, police briefly detained and charged ABFSU Central Executive Committee members Soe Hla Naing and Kyaw Thiha Ye Kyaw on the same charges.

Despite the arrests, between September 11 and October 9, ABFSU members continued to conduct more than 12 leafletting and poster campaign activities in townships throughout Mandalay and in other regions. ABFSU members distributed material with slogans saying, “Oppose murderous fascism” and “Dictatorships must fail” and calling for the government to lift mobile internet restrictions in Rakhine and Chin states, where the Myanmar Army and Arakan Army are engaged in an ongoing armed conflict.

In an apparent response to ABFSU’s campaign, police filed more serious charges against the ABFSU members and conducted a series of raids on homes and university campuses, arresting 15 students over the course of two weeks, including:

Most of the detained protesters face multiple charges—in some cases, in multiple jurisdictions—including for alleged violations under the Peaceful Assembly and Peaceful Procession Law (Peaceful Assembly Law), the Myanmar Criminal Code, and the Natural Disaster Management Law. Many face several years in prison.

Section 505(a) of the Myanmar Criminal Code prohibits anyone who “makes, publishes or circulates any statement, rumor, or report” with the intent or likelihood to cause a member of the military “to mutiny or otherwise disregard his duty.” Section 505(b) similarly prohibits expressions intended or likely to cause “fear or alarm” among the public or induce others to “commit an offence against the State or against the public tranquility.” Punishment under these sections includes up to two-years’ imprisonment and/or a fine.

The Peaceful Assembly Law provides a maximum penalty of up to three months in prison and/or a fine of up to 30,000 Myanmar Kyat (about US$23) for failing to give advanced notice to the authorities when organizing an assembly. Section 25 of the Natural Disaster Management Law provides a maximum penalty of three years’ imprisonment and/or a fine for willful or negligent actions leading to natural disasters and has recently been applied to those failing to adhere to COVID-19 restriction measures.

Kyaw Thiha Ye Kyaw and Myo Chit Zaw, whom the courts recently sentenced to imprisonment in Obo Prison, were among a group of students arrested in December 2018 for their involvement in peaceful protests calling for increased security measures and other improvements at Yadanabon University in Mandalay. Both previously spent more than 80 days in Obo Prison, where they reported being tortured by guards.

Fortify Rights and Athan documented the arrest, detention, and torture of student activists in Mandalay in the April 2020 joint report, “Our Demands are for All Students”: Violations of Students’ Rights in Mandalay, Myanmar. In that report, Myo Chit Zaw described the beatings he experienced in Obo Prison: “[A] guard pulled my arms from the back so I couldn’t move while another guard hit my face and kicked my chest. Two guards were pulling me from the back while two others were kicking, beating me. The guards also beat my back with a truncheon.”

Despite reporting the 2018 beatings and abusive treatment to the prison and relevant government authorities, the students received no response or remedies.

“Myanmar’s record of torture and ill-treatment in detention is cause for serious concern amidst a crackdown like this,” said Ismail Wolff. “The international community must speak with one voice and demand the immediate release of all political prisoners and assurances of their safety.”

On October 14, amidst this crackdown, the European Union and the Government of Myanmar held their sixth Human Rights Dialogue.

“The Myanmar parliament should amend the peaceful assembly law without delay,” said Ismail Wolff. “The relentless crackdown on freedom of expression and peaceful assembly in Myanmar is extreme and worsening. All arbitrarily detained activists and political prisoners must be released.”

Compendium of the Crackdown