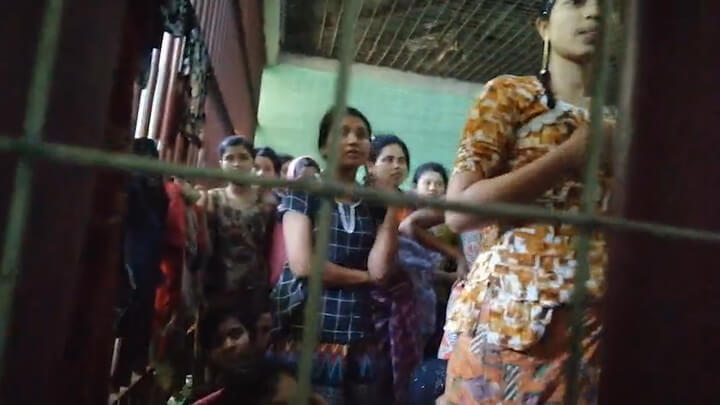 (YANGON, December 9, 2019)—The Government of Myanmar should free a group of 95 newly detained Rohingya and end widespread and discriminatory restrictions on the right to freedom of movement for Rohingya, said Fortify Rights today. New footage obtained by Fortify Rights shows dozens of Rohingya men, women, and children in overcrowded cells in Pathein, Irrawaddy Region. Myanmar authorities arrested the group on November 29 for traveling without permission.

“This footage shows the impossible reality Rohingya have faced for decades under a government intent on destroying them,” said Matthew Smith, Chief Executive Officer at Fortify Rights. “While State Counselor Suu Kyi prepares to deny any wrongdoing before the world court in The Hague this week, Rohingya in Myanmar continue to face reprisals for exercising their basic rights and freedoms.”

The new video footage, filmed on December 2 and published today by Fortify Rights, shows dozens of Rohingya behind bars in the Pathein police station in Irrawaddy Region. The 95 detainees include 44 women and 23 children, including 20 girls and three boys. Two detained children are believed to be less than four years old, and according to witnesses who visited the detainees in jail, two of the detained children appear to be sick and in need of medical treatment. The detained Rohingya are from Maungdaw, Buthidaung, and Sittwe townships in northern Rakhine State.

“They should have the right to travel,” a witness who visited the jail told Fortify Rights. “They are stripping the Rohingya people of their basic human rights.”

The Government of Myanmar continues to deny Rohingya freedom of movement and arbitrarily detain those who attempt to travel outside their villages without official approval. Fortify Rights has documented how the authorities arrest and detain Rohingya for alleged violations under the 1949 Residents of Burma Registration Act, which articulates restrictions on movement and carries a maximum punishment of a two-year sentence for violations of its provisions.

Fortify Rights has on file more than 100 pages of court documents from cases involving Rohingya convicted under the 1949 Residents of Burma Registration Act.

The International Court of Justice (ICJ), also known as the world court, will hold public hearings in The Hague from December 10 to 12 as part of a case brought by The Gambia on November 11 against Myanmar for allegedly violating the Genocide Convention in its attempts to destroy Rohingya Muslims as a group. The court will consider the Gambia’s request for “provisional measures,” which are binding orders from the court to the parties in the case to prevent further violation of the rights in dispute while the case is pending. State Counselor Aung San Suu Kyi will lead the Myanmar delegation in the court.

Last week, Fortify Rights published new evidence of Myanmar authorities using Rohingya for slave labor, including child slave-labor, systematically restricting freedom of movement, and denying the existence of Rohingya and their right to a nationality.

Fortify Rights published full-length reports on the crime of genocide against Rohingya in Rakhine State in 2015 with a team from Yale Law School, in 2017 with the U.S. Holocaust Memorial Museum, and in 2018 and 2019.

“Rohingya are experiencing genocide,” said Matthew Smith. “This deserves urgent attention from the ICJ and governments globally, and we fully expect the court to issue provisional measures.”