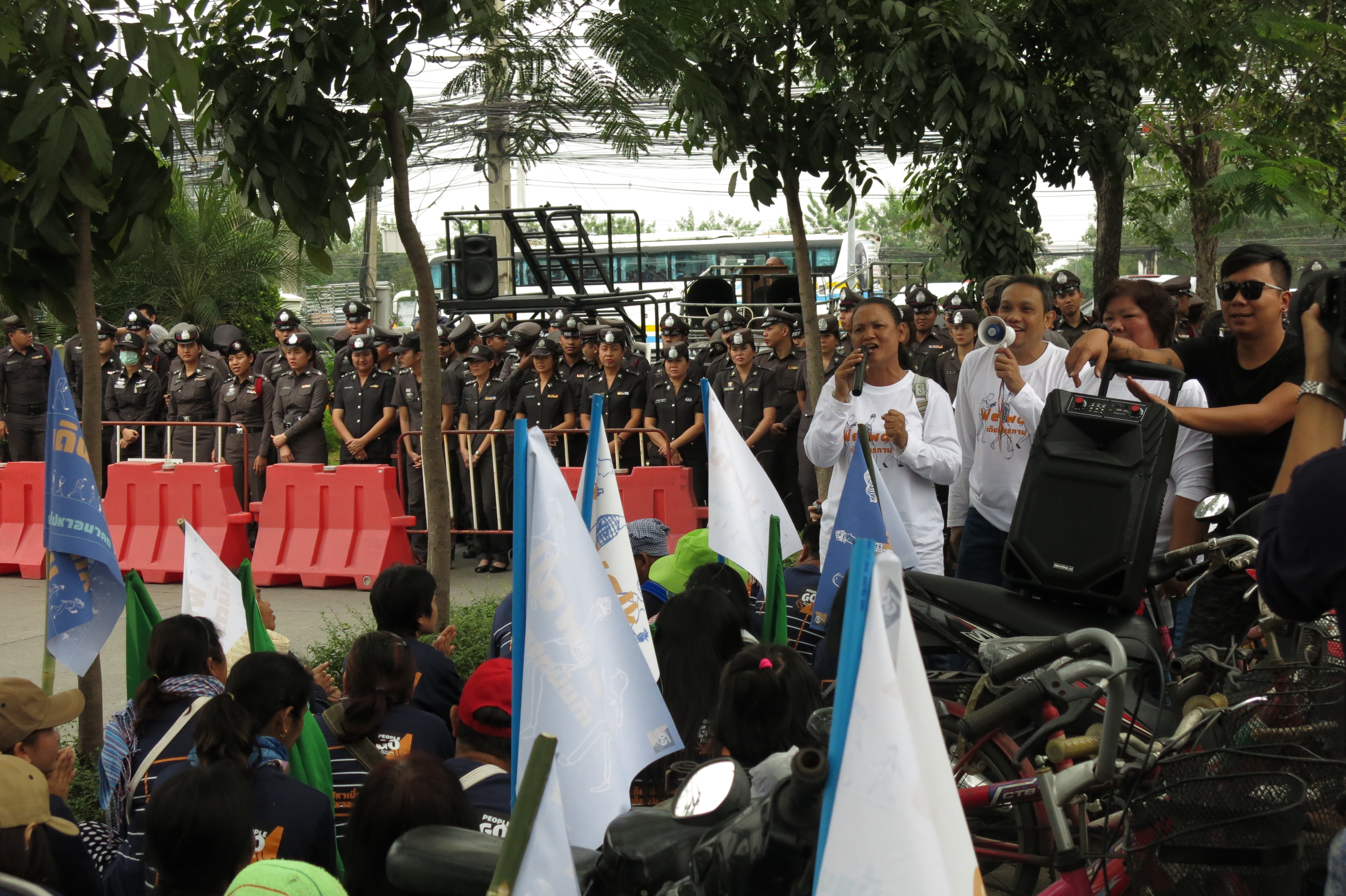 Prosecutor expected to consider charges against protesters on Tuesday

(Bangkok, June 4, 2018)—Thai authorities should immediately drop criminal charges against peaceful protesters involved in the “People Go Network” march that took place in January, Fortify Rights and EnLaw Thai Foundation said today. On Tuesday, June 5, the Thanyaburi Provincial Prosecutor in Pathum Thani Province will decide whether the criminal case against eight organizers of the march will proceed to trial.

On January 20, more than 100 members from People Go Network—a network of more than 100 civil society groups and individuals advocating for human rights and democratic principles—gathered to participate in a “We Walk Friendship March” at Thammasat University on Rangsit Campus in Pathum Thani Province. The protesters planned to march *approximately* 280 miles from Thammasat University to Khon Kaen Province *during* a 28-day period to bring attention to the need in Thailand for: 1) universal healthcare; (2) food safety and security; (3) community consultation in natural resource management; and (4) public participation in the Constitution development and election-planning process.

Although the organizers notified the Khlong Laung District Police about the march on January 17, as required by the 2015 Public Assembly Act, about 200 police officers blocked the protesters from proceeding with the march on January 20. Approximately 150 protesters peacefully gathered in front of the police line, made speeches, and sang songs. More than a dozen protesters exited the university campus and proceeded with the march, walking in groups of four, to Khon Kaen.

The Administrative Court subsequently issued an injunction on January 26 against the police, prohibiting police officers from obstructing the “We Walk Friendship March” and ordering the police to provide security and coordinate traffic until the end of the march on February 17. The Supreme Administrative Court reaffirmed the injunction on February 15, stating that the injunction was necessary to uphold “the rights to freedom of peaceful assembly which is an important element in a democratic regime.”“The Supreme Administrative Court’s decision is significant in upholding freedoms of peaceful protest and expression, especially under the current military government,” said Mr. Surachai Trongngam, Secretary-General of the EnLaw Thai Foundation (Environmental Litigation and Advocacy for the Wants), a Thai non-profit organization supporting communities to exercise their rights to health and environmental protection and one of the lawyers representing the protesters.

Despite this order, the organizers of the march continue to face charges for their role in organizing the protest. On January 23, 2018, Commander of Anti-Aircraft Artillery Battalion IV Lieutenant Colonel Phusit Khlaihiran filed a criminal complaint against eight organizers of the People Go Network march for allegedly violating Article 12 of the National Peace and Council Order (NCPO) No. 3/2558, which prohibits political gatherings of more than five people. The eight organizers—Mr. Lertsak Kumkongsak, Mr. Nimit Tienudom, Ms. Nutchanart Thanthong, Mr. Jumnong Nupan, Mr. Somchai Grajanseang, Ms. Sangsiri Teemanka, Mr. Anusorn Unno, and Mr. Ubon Yuwa—face up to six months’ imprisonment and/or a fine of 10,000 Thai Baht (US$333).

On January 31, 2018, the Khlong Laung District Police arrested and charged the eight organizers with alleged violations under Article 12 of NCPO Order No. 3/2558 for collecting signatures on January 19 to propose a bill to repeal NCPO orders and announcements and selling t-shirts with the phrase, “Each of Your Signatures Count, Help Disarm the NCPO.” The organizers also gave speeches on January 20, 2018, criticizing the military government administration. The organizers denied the charges, and the police released them on the same day.

Sangsiri Teemaka, a long-time woman advocate for the right to health and one of the eight organizers facing charges, told Fortify Rights:

In addition to the organizers of the march, Thai authorities also arrested protesters and supporters of the march. For example, on February 6, 2018, Lieutenant Adul Chaisriha from Khun Jom Tham military camp in Payao Province filed a criminal complaint against 11 members of the Northern Peasants Federation of Thailand (NPFT)—a community-based organization of farmers advocating for land and water rights—and three students, including a 16-year-old boy, who is the son of an NPFT member. The complaint alleged violations under Article 12 of NCPO Order No. 3/2558 for a peaceful solidarity march held in Ban Doi Thewada, Phu Sang District, Payao Province on February 5 to support the We Walk protesters. That evening, the police and military officers arrested and held 11 of the 14 protesters overnight at Phu Sang District Police Station.

On February 6, the Phusang District Police notified the ten of the 11 protesters, including Ms. Saeng Sobbong, Mr. Wanlop Pundee, Mr. Prayoon Yamongkol, Ms. Nom Karanoi, Mr. Nun Jatunam, Mr. Chern Daengmanee, Mr. Boonyuen Saengkaew, Mr. Somchai Koowattanasakul, Ms. Gunthima Mongkoldee, and Mr. Worasathit Buadaeng, of the criminal charge under Article 12 of NCPO Order No. 3/2558. That same day, the Chiang Kam Provincial Court set bail for the 10 protesters at 5,000 Thai Baht (US$166) each. On March 6, 2018, a court official informed the protesters that the police withdrew the order for pre-trial detention and dropped the charge against the protesters. The case is pending consideration by the Chiang Kham Provincial Prosecutor.

Police officers at Lamsai Sub-District Administrative Office in Ayutthaya Province also detained and questioned without the presence of a lawyer four members of the People Go Network who drove a truck with food and water for protesters on January 21. The police released the four individuals a few hours later without charges.

The rights to freedom of expression and peaceful assembly are guaranteed under Sections 34 and 44 of the 2017 Thai Constitution. These rights are also protected under articles 19 and 21, respectively, of the International Covenant on Civil and Political Rights (ICCPR), to which Thailand is a state party.  Under Article 21 of the ICCPR, state authorities are only able to restrict peaceful assemblies when restrictions are provided by law, proportional, and necessary to accomplish a legitimate aim. Criminal penalties for peaceful protests are considered a disproportionate penalty under international law. The Declaration on Human Rights Defenders further protects human rights defenders in the context of their work, including their rights to expression and peaceful assembly.

In March 2017, the U.N. Human Rights Committee—a body of independent experts that monitors states’ compliance with the ICCPR—expressed concern about “the excessive restrictions imposed on the freedom of peaceful assembly, in particular the strict banning of any public gathering of more than five people,” and called on Thailand to “refrain from imposing detention on individuals exercising their rights who do not present a serious risk to national security or public safety.”

Thailand should repeal NCPO Order No. 3/2558 and other laws and policies that restrict the right to peaceful assemblies in Thailand in violation of international law, said EnLaw Thai Foundation and Fortify Rights.