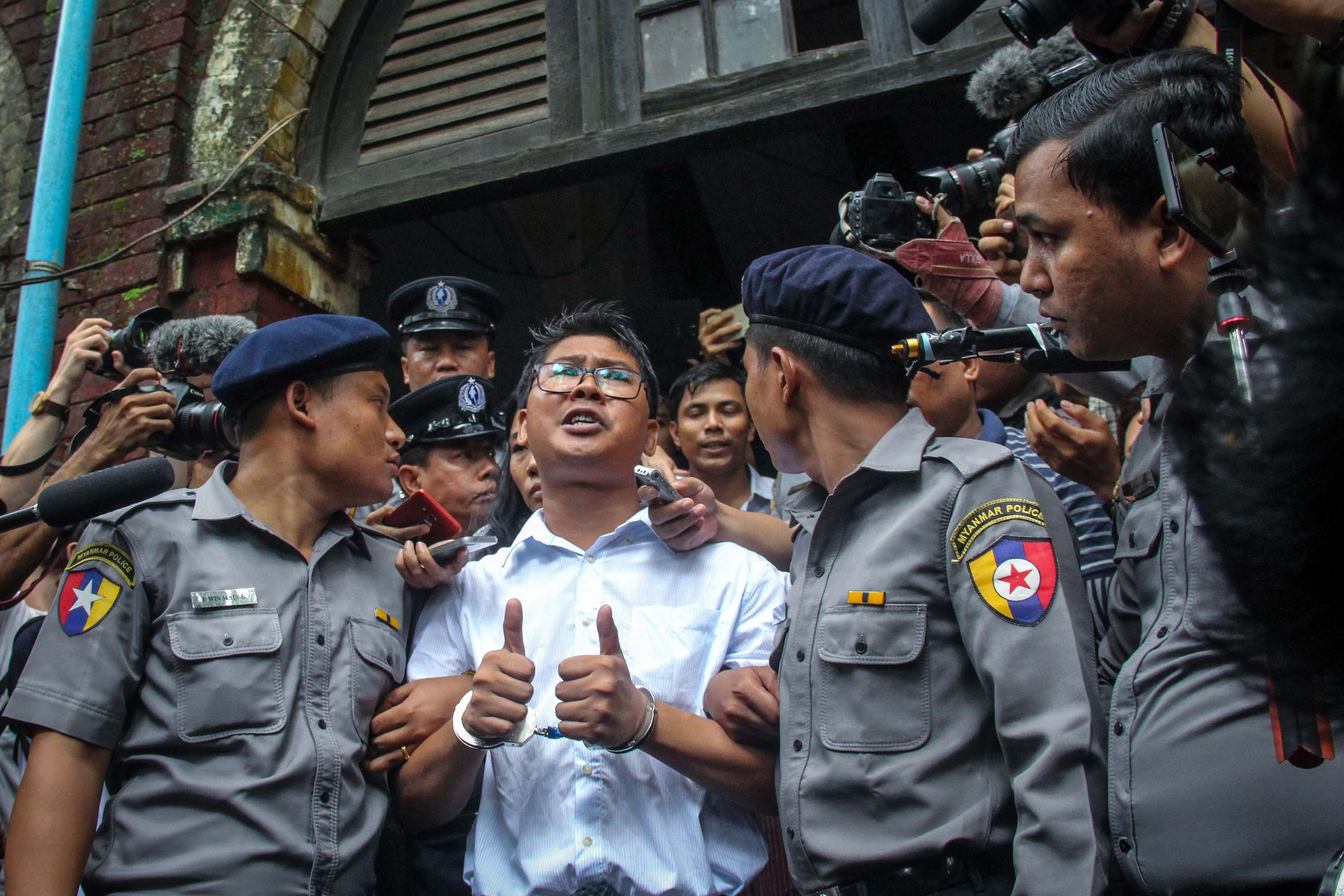 One-year anniversary of the arbitrary detention of Reuters journalists

“Wa Lone and Kyaw Soe Oo shouldn’t spend another day in prison,” said Matthew Smith, Chief Executive Officer at Fortify Rights. “State Counselor Suu Kyi has the authority to free them and should do so immediately and unconditionally.”

On September 3, 2018, a Yangon court sentenced the pair to seven years in prison under the colonial-era Official Secrets Act in an apparent response to their investigation of a massacre of 10 Rohingya men by Myanmar security forces in northern Rakhine State in August 2017. In November 2018, Reuters appealed the conviction on behalf of Wa Lone and Kyaw Soe Oo.

Police arrested the two journalists in Yangon around 11:30 p.m. on December 12, 2017. Earlier that evening, Wa Lone and Kyaw Soe Oo attended a dinner with police officials near the Battalion 8 compound north of Yangon. During the dinner, a member of the police force reportedly gave the journalists documents related to the situation in Rakhine State. The pair were investigating a massacre of Rohingya civilians in the village of Inn Dinn in northern Rakhine State.

From December 12 to 26, 2018, the authorities held Wa Lone and Kyaw Soe Oo incommunicado at an unknown location, prompting worldwide calls for their release.

In April 2018, Police Captain Moe Yan Naing testified in court that Police Brigadier General Tin Ko Ko had ordered the officers to “entrap” the journalists by planting “secret” documents on them. The Myanmar authorities later convicted Police Captain Moe Yan Naing of violating the  Myanmar Police Force Maintenance of Discipline Law. The authorities charged him under Section 16(b), which prohibits police from neglecting “to obey any general, local or other order issued in writing,” and Section 22, which prohibits police from engaging in “any act or omission which…is pre-judicial to good order and police discipline.” These violations carry sentences of up to one year in prison.

On January 10, in response to the Reuters investigation of the Inn Dinn massacre, the Myanmar military admitted in a statement that security forces and villagers captured and summarily executed ten “Bengali terrorists”—a pejorative term for Rohingya Muslims—and buried them in a mass grave near Inn Dinn, claiming that “ethnic Buddhist villagers were threatened and provoked by the terrorists.” This marked the military’s first admission of wrongdoing against Rohingya in Rakhine State since major military operations began in October 2016.

On April 11, a Myanmar military court also reportedly convicted seven soldiers for their involvement in the Inn Dinn killings. An independent U.N. Fact-Finding Mission was “unable to ascertain whether the rare soldiers convicted of serious crimes actually serve their sentences.”

“A free press is non-negotiable,” said Matthew Smith. “The government fears and distrusts the media and is attempting to control it by force, regardless of basic human rights. This case is an affront to rule of law.”

Last week, the United States Holocaust Memorial Museum and the Public Interest Law and Policy Group each recognized that Myanmar authorities committed genocide and crimes against humanity against Rohingya in Myanmar.

The U.N. Security Council should refer the situation in Myanmar to the International Criminal Court or create an ad hoc tribunal to investigate and prosecute the full spectrum of atrocity crimes in Myanmar, including crimes in Rakhine, Kachin, and Shan states, said Fortify Rights.

“Impunity for mass atrocity crimes reverberates internationally and is a detriment to the world,” said Matthew Smith. “Journalism is not a crime but genocide is, and it should be prosecuted in an independent and impartial international court.”