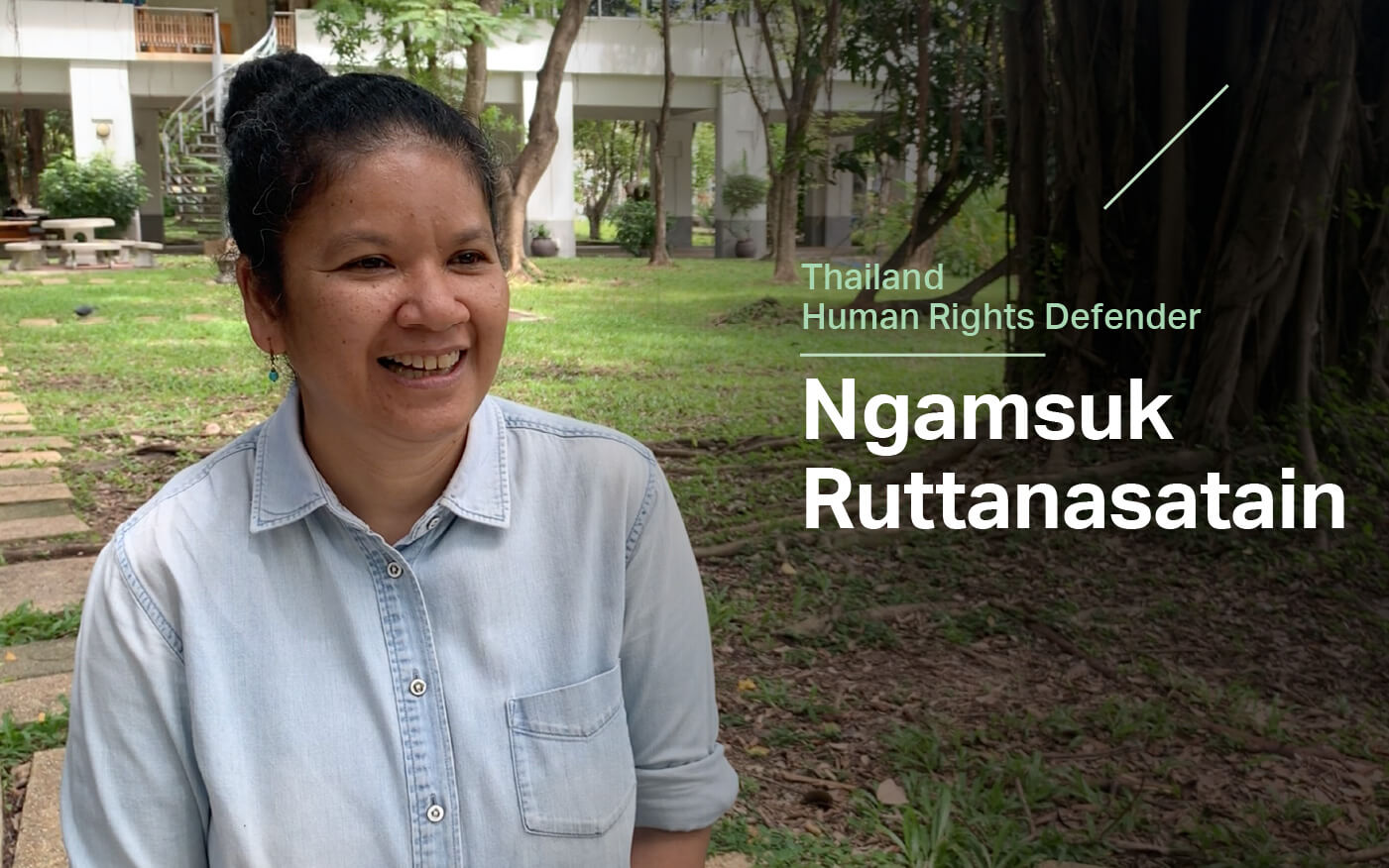 “Reading was my escape…”

She is also facing criminal defamation charges in Thailand for exercising her right to free speech.

While her students refer to her as Ajarn Lek, meaning “small professor” in Thai, referring to her short stature, NgamsukRuttanasatain looms large among human rights academics in Thailand.

“There is no doubt about her commitment to the cause of peace and justice,” said fellow Mahidol University lecturer Gotham Arya.

Born to a Thai-Buddhist family in Yala Province, one of Thailand’s Muslim-minority, violence-affected southern provinces, Ngamsuk attributes her interests in human rights and peacebuilding to “a combination of my childhood, my professional experiences, and my passion for social, cultural, and political changes.”

“Actually, I never wanted to be a lecturer because my parents are teachers. I didn’t want to go into the same profession as my parents,” Ngamsuk jokingly told Fortify Rights.

Describing a childhood tinged with bouts of domestic violence between her parents, Ngamsuk said she told her parents at age 13 that she wanted to leave home, and she moved to Songkhla Province to continue her education.

“Reading was my escape,” she said.

Through reading, she became politically engaged. Inspired by the writings of Thai activist Chit Phumisak and songs by Caravan—works that focus on social justice and the plight of ordinary Thai people—Ngamsuk started down the path that led her to where she is today.

From volunteering in one of the largest slums in Bangkok to supporting community-based organizations in northeastern Thailand in their campaigns for land rights and economic reforms, Ngamsuk has tirelessly worked to promote human rights protections.

And her activism has not been limited to Thailand.

For more than ten years, Ngamsuk worked with a human rights organization focused on documenting violations in neighboring Myanmar. Through this work, Ngamsuk first experienced the dangers and risks of human rights work.

“We were taking photos and documenting the violence near the Thailand-Myanmar border,” she told Fortify Rights. “As we were walking along the canal, I saw a group of men standing on the other side [Myanmar] pointing their weapons toward us. At that moment, I knew we had to go with them.”

Ngamsuk recalled how members of a pro-Myanmar military armed group detained her and a colleague for more than five days in 1998.

“They put us in handcuffs and tied us to a tree in the middle of the jungle. I could hear shooting everywhere,” she said.

“I was terrified. One of the men even asked me whether I had any last words. I thought of my mother . . . I told them that no matter what happens, do not contact my family. I didn’t want my mother to be concerned.”

Eventually, the armed group released and returned Ngamsuk and her colleague back to Thailand.

“No one really knew what PTSD [Post-Traumatic Stress Disorder] was at the time,” she said, recalling the impacts of the incident on her at the time. “I couldn’t sleep, and I kept crying and crying. In the end, I sought and found my peace in meditation and mindfulness.”

A Defender of Justice

Ngamsuk has spent her adult life teaching, promoting, and protecting human rights in Thailand and elsewhere.

Now, she must defend her own rights.

The company is attempting to use Thai law to silence and intimidate human rights defenders. Under Thailand’s Criminal Code, Ngamsuk faces up to two years in prison and up to 200,000 Thai Baht (US$6,500) in fines.

On Wednesday, September 18, the Bangkok Criminal Court will decide whether to proceed with the case against Ngamsuk Ruttanasatain. Fortify Rights and others stand by her.

Support an end to criminal defamation in Thailand.