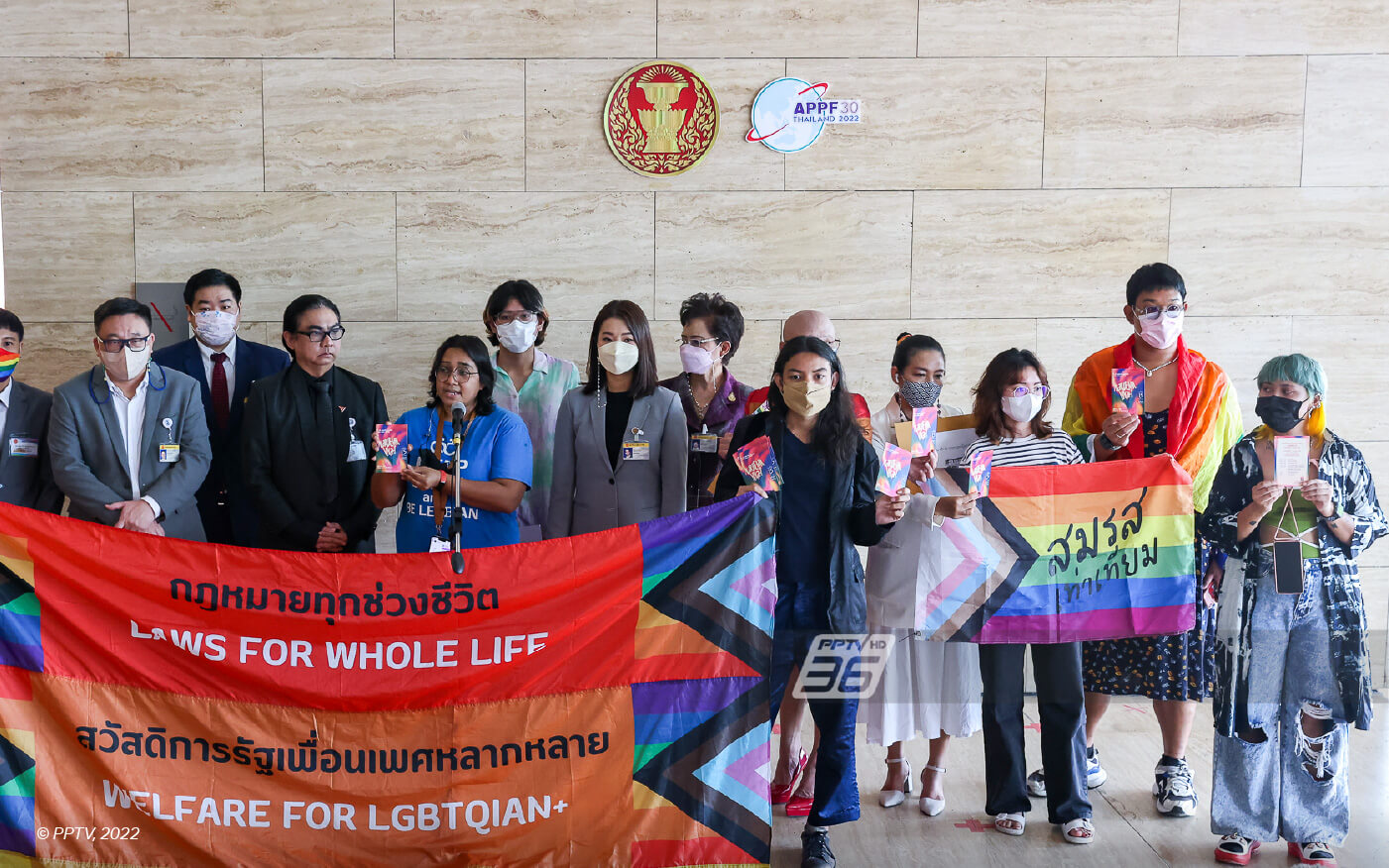 (BANGKOK, November 1, 2022)—Thailand’s House of Representatives should approve the draft Act for Amendment to the Civil and Commercial Code, commonly known as the marriage equality bill, during the upcoming National Assembly session, Fortify Rights said today. The National Assembly opens for its second legislative session on November 1, 2022, where the marriage equality bill is expected to re-enter the parliament for approval by Thailand’s House of Representatives.

“Parliament must take the opportunity of this new legislative session to make marriage equality a reality in Thailand,” said Mookdapa Yangyuenpradorn, Thailand Human Rights Associate at Fortify Rights.“Legislators need to prioritize further readings of the marriage equality bill and end the prolonged discrimination against LGBTI+ couples.”

On June 15, 2022, Thailand’s House of Representatives approved four bills to extend the right to marriage to LGBTI+ couples, including both the marriage equality bill and the draft Civil Partnership Act. The bills are different in the rights they guarantee LGBTI+ persons.

The marriage equality bill passed its first reading by a vote of 210 to 180 on June 15, 2022, and the civil partnership bill passed by a vote of 222 to 167 on the same date. The House of Representatives then set up a parliamentary sub-committee to scrutinize both bills. Since July 2022, both bills have separately undergone revisions by the sub-committee and are now ready to be sent back to parliament for section-by-section readings and voting by the House of Representatives.

The marriage equality bill proposes to revise Section 1448 of Thailand’s Civil and Commercial Code, commonly known as the “marriage law,” to replace the terms “husband” and “wife” with the word “spouse.” The bill also proposes replacing the words “man” and “woman” with “person.” These changes would allow two individuals to be legally married regardless of their sexual orientation or gender identity, providing LGBTI+ couples with the right to marry, as well as connected rights and privileges such as spousal welfare, child adoption, healthcare consent, property co-management, inheritance, and access to spousal tax benefits, and government pensions.

In contrast, the civil partnership bill allows same-sex partners to legally register as “civil partners,” and provides a more limited set of rights and privileges to same-sex partners on issues such as child adoption, healthcare consent, property co-management, and inheritance. Unlike the marriage equality bill, the civil partnership bill does not guarantee LGBTI+ couples the same rights as heterosexual couples, particularly access to spousal benefits of tax deductions and government pensions.

According to the Thai constitution, any bills must be approved by the House of Representatives in the second or third readings before reaching the Senate for further consideration. Under Section 136 of the constitution, the Senate “must complete the consideration of such bill within sixty days.” The upcoming ordinary session is scheduled to end on February 28, 2023.

On September 6, 2022, the National Human Rights Commission of Thailand issued a statement urging the House of Representatives to pass the marriage equality bill in their second and third readings to “enhance the protection of human rights and dignity of LGBTI+ people, as well as eliminate sexual and gender based discrimination in Thailand.” The statement also reiterates the need to bring Thai laws in line with Thailand’s obligations under the International Covenant on Civil and Political Rights (ICCPR), to which Thailand is a state party, and the Yogyakarta Principles, which are binding international legal standards on sexual orientation and gender identity.

Article 23 of the ICCPR guarantees the right to family and marriage, providing that “[t]he right of men and women of marriageable age to marry and to found a family shall be recognized.” As a state party to the ICCPR, Thailand must “take appropriate steps to ensure equality of rights and responsibilities of spouses as to marriage, during marriage and at its dissolution.” Article 26 of the ICCPR also guarantees equal protection of the law without any discrimination. The principle of non-discrimination is also considered a fundamental right under customary international law binding on all states. Section 27 of the Constitution of the Kingdom of Thailand similarly prohibits all forms of discrimination.

“Thai lawmakers’ decisiveness will clearly indicate whether the country is ready to provide full and equal rights for LGBTI+ couples or will continue to treat them like second-class citizens,” said Mookdapa Yangyuenpradorn. “The marriage equality bill is the only proposed law that will ensure the fundamental right to marry for everyone in Thailand and should be urgently approved.”