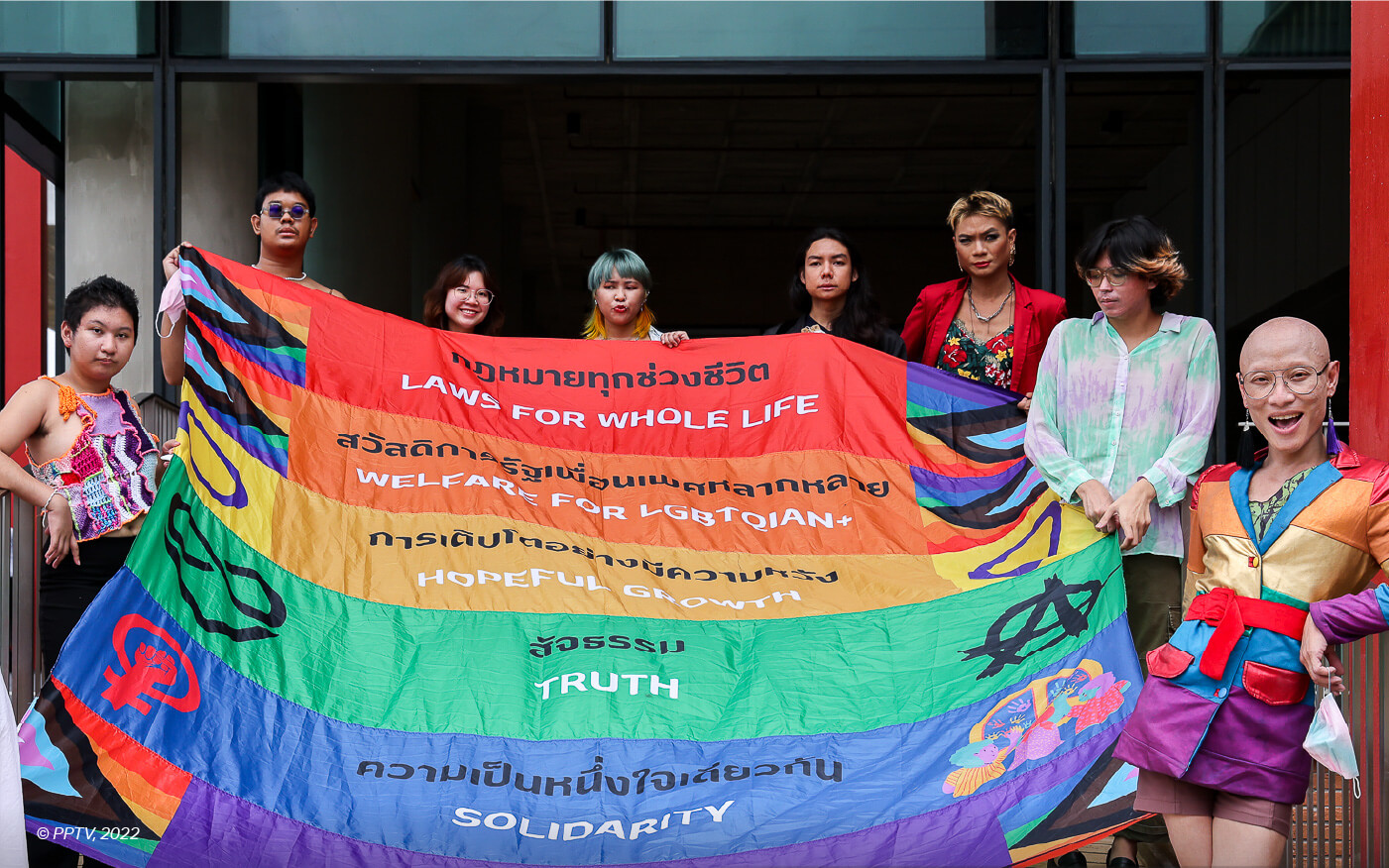 (BANGKOK, September 16, 2022)—Thailand’s House of Representatives should immediately convene its second session this year to ensure the passage of legislation related to LGBTI+ rights, said Fortify Rights today. On June 15, 2022, Thai legislators approved four bills to extend the right to marriage to LGBTI+ couples. However, the National Assembly is expected to close its first session on September 19, 2022 and may not reconvene until after Thailand’s elections in March 2023, delaying the legislative process surrounding the bills.

“Halting the legislative process now will only prolong discrimination against the LGBTI+ community,” said Amy Smith, Executive Director at Fortify Rights. “Members of the LGBTI+ community in Thailand have already waited too long for equal rights. Legislators should schedule the next ordinary session immediately and prioritize further readings of the marriage equality bill.”

LGBTI+ people in Thailand are denied the right to marriage and continue to face discrimination under the law in Thailand.

Earlier this year, Thailand’s House of Representatives approved both the draft Act for Amendment to the Civil and Commercial Code—commonly known as the marriage equality bill—and the draft Civil Partnership Act following their first readings on June 15, 2022. Both bills are now undergoing revisions as the National Assembly edges closer to its termination.

If passed, the marriage equality bill would revise Section 1448 of Thailand’s Civil and Commercial Code,—commonly known as the “marriage law,”—to replace the terms “husband” and “wife” in the Code with the word “spouse.” The bill also proposes replacing “man” and “woman” with “person.” These changes would allow two individuals to be legally married regardless of their sexual orientation or gender identity, providing LGBTI+ couples with rights to marriage, welfare, child adoption, healthcare consent, property co-management, inheritance, and access to spousal benefits of tax deductions and government pensions.

On the other hand, the civil-partnership bill, if passed, would allow same-sex partners to legally register as “civil partners” and would provide for their rights to child adoption, healthcare consent, property co-management, and inheritance. Unlike the marriage equality bill, the civil partnership bill does not guarantee the same rights to LGBTI+ couples as heterosexual couples, particularly access to spousal benefits of tax deductions and government pensions.

After the marriage equality bill passed its first reading in a vote of 210 to 180 on June 15, the House of Representatives set up a parliamentary sub-committee to scrutinize the bill. The sub-committee’s work began immediately after but will be suspended with the conclusion of the first ordinary session of the National Assembly on September 19, 2022. If the second ordinary session of the National Assembly is not called soon, the next sitting could be pushed to next year after the upcoming election in March. This means that the legislative process for the marriage equality bill, among other awaiting bills, will be on hold for at least another six months.

According to the Constitution of Thailand, any bill needs to be approved in the second and third readings before reaching the Senate, where it would be voted on for approval or sent back to the House. The House of Representatives has yet to schedule the dates for the next annual ordinary session.

On September 8, Thai civil society groups involved in the Rainbow Alliance for Marriage Equality submitted an open letter to the parliamentary sub-committee responsible for reviewing the two bills to demand that the sub-committee continue the second and third readings of the marriage equality bill until it reaches the Senate.

On September 6, the National Human Rights Commission of Thailand issued a statement urging the House of Representatives to pass the marriage equality bill in their second and third readings to “enhance the protection of human rights and dignity of LGBTI+ people, as well as eliminate sexual and gender based discrimination in Thailand.” The statement also reiterates the need to bring Thai laws in line with Thailand’s obligations under the International Covenant on Civil and Political Rights (ICCPR) and the Yogyakarta Principles, which are based on binding international legal standards in relation to sexual orientation and gender identity.

Article 23 of the ICCPR guarantees the right to family and marriage, providing that “[t]he right of men and women of marriageable age to marry and to found a family shall be recognized.” As a state party to the ICCPR, Thailand must “take appropriate steps to ensure equality of rights and responsibilities of spouses as to marriage, during marriage and at its dissolution.” Article 26 of the ICCPR also guarantees equal protection of the law without any discrimination. The principle of non-discrimination is also considered a fundamental right under customary international law binding on all states. Section 27 of the Constitution of Thailand similarly prohibits all forms of discrimination.

“Thailand must ensure marriage equality as a national priority,” said Amy Smith. “Thailand’s legislators should bring the country’s laws in compliance with international standards as well as the constitution and end discrimination against LGBTI+ couples.”