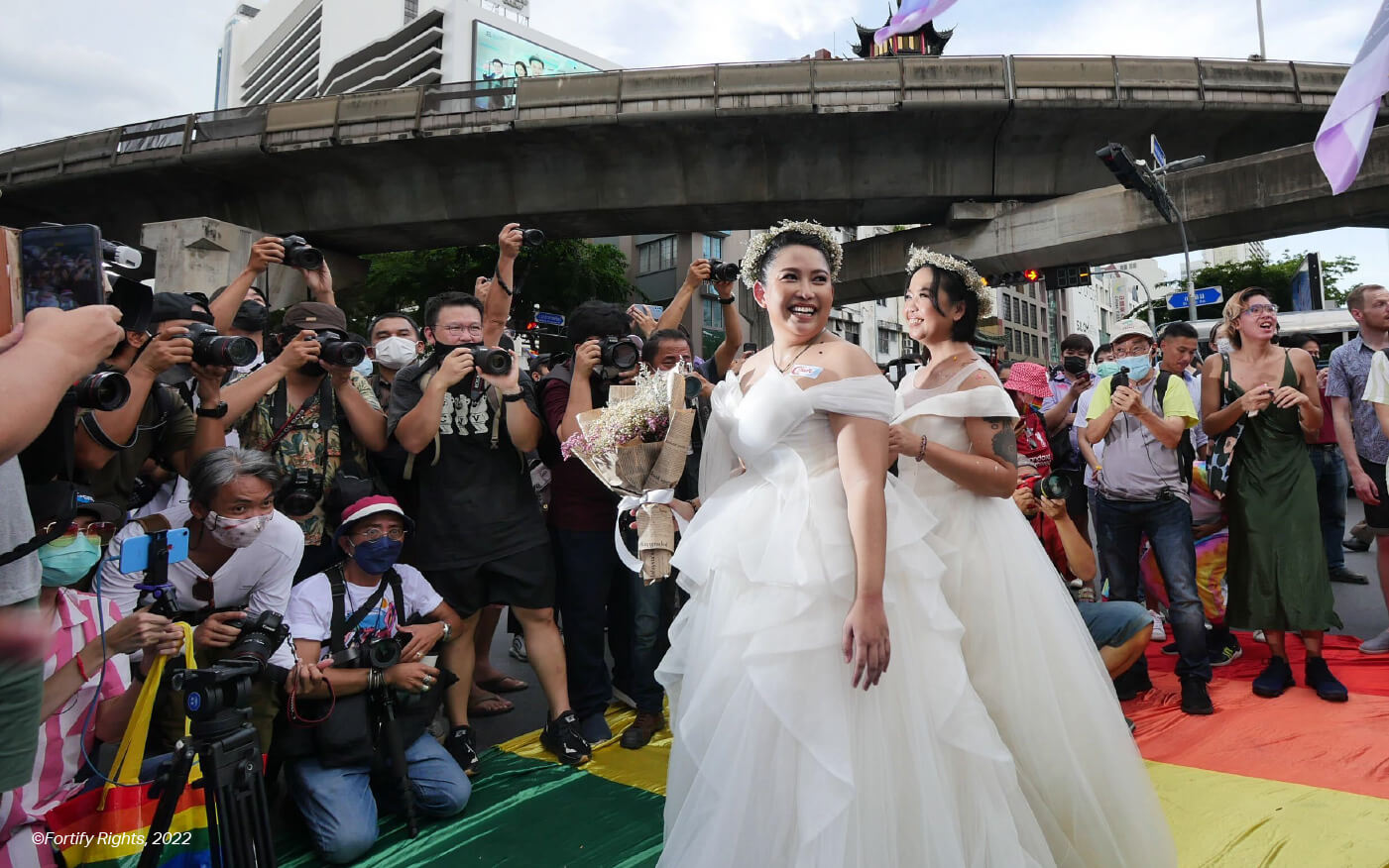 House of Representatives set to vote on revised bill tomorrow

(BANGKOK, June 7, 2022)—Thailand’s House of Representatives should approve the draft Act for Amendment to the Civil and Commercial Code (no. ..) B.E. …—commonly known as the marriage equality bill—to protect the fundamental right to marriage and family for everyone, regardless of sexual orientation and gender identity, Fortify Rights said today. Following the Thai Cabinet’s rejection of an earlier draft two months ago, the House of Representatives will vote tomorrow on whether to proceed with a revised version of the bill.

“The proposed marriage equality bill addresses gaps that have left LGBTI+ couples in Thailand without access to equal rights,” said Amy Smith, Executive Director at Fortify Rights. “Approval of this bill will bring Thailand one step closer to ensure LGBTI+ couples are treated the same as heterosexual couples.”

The current marriage equality bill proposes a revision to Section 1448 of Thailand’s Civil and Commercial Code, commonly known as the “marriage law,” to replace the terms “husband” and “wife” in the Code with the term “spouse.” The bill also proposes replacing “man” and “woman” with “person.” These changes would allow two individuals to be legally married regardless of their sexual orientation or gender identity, providing LGBTI+ couples with rights to marriage, welfare, child adoption, healthcare consent, property co-management, inheritance, and access to spousal benefits of tax deductions and government pensions.

On June 8, the Move Forward Party will submit the current version of the marriage equality bill to the parliament after the Thai Cabinet under the Prime Minister’s Office rejected an earlier version of the bill on March 29, 2022. The Cabinet rejected the earlier bill, which the Move Forward Party submitted to Parliament on March 9, claiming that it was redundant to the Civil Partnership Bill.

The draft Civil Partnership Act B.E. … and the draft Act for Amendment to the Civil and Commercial Code (no. ..) B.E. …—known shortly as the civil partnership bill— was approved by the Cabinet in July 2020. It allows same-sex partners to legally register their relationship and allows for their rights to child adoption, healthcare consent, property co-management and inheritance. However, the civil partnership bill fails to address the situation of “life partners” and does not guarantee the same rights to LGBTI+ couples as heterosexual couples, especially the lack of access to spousal benefits of tax deductions and government pensions. By proposing changes to the terms used in the Civil and Commercial Code, the new marriage equality bill would address these continuing gaps.

On November 10, 2021, during Thailand’s third round of the Universal Periodic Review at the U.N. Human Rights Council, representatives of Luxembourg, France, and the Netherlands recommended that Thailand amend Section 1448 of the Civil and Commercial Code to ensure marriage equality in Thailand. While Thailand highlighted in its national report to the Council that “life partners” are entitled to certain rights and benefits equal to married couples under the Civil and Commercial Code, it failed to address recommendations to ensure marriage equality through the Code.

Article 23 of the International Covenant on Civil and Political Rights (ICCPR) guarantees the right to family and marriage, providing that “[t]he right of men and women of marriageable age to marry and to found a family shall be recognized.” As a state party to the ICCPR, Thailand is obligated to “take appropriate steps to ensure equality of rights and responsibilities of spouses as to marriage, during marriage and at its dissolution.” Article 26 of the ICCPR also guarantees equal protection of the law without any discrimination. The principle of non-discrimination is also considered a fundamental right under customary international law, and therefore, binding on all states. Section 27 of the Constitution of the Kingdom of Thailand similarly prohibits all forms of discrimination.

“The current law in Thailand creates a hierarchy of citizens based on sexual orientation and gender identity.” said Amy Smith. “This marriage equality bill has the potential to eliminate the discrimination that exists between LGBTI+ couples and other couples and, in doing so, will bring Thailand’s laws in compliance with international standards as well as its constitution.”