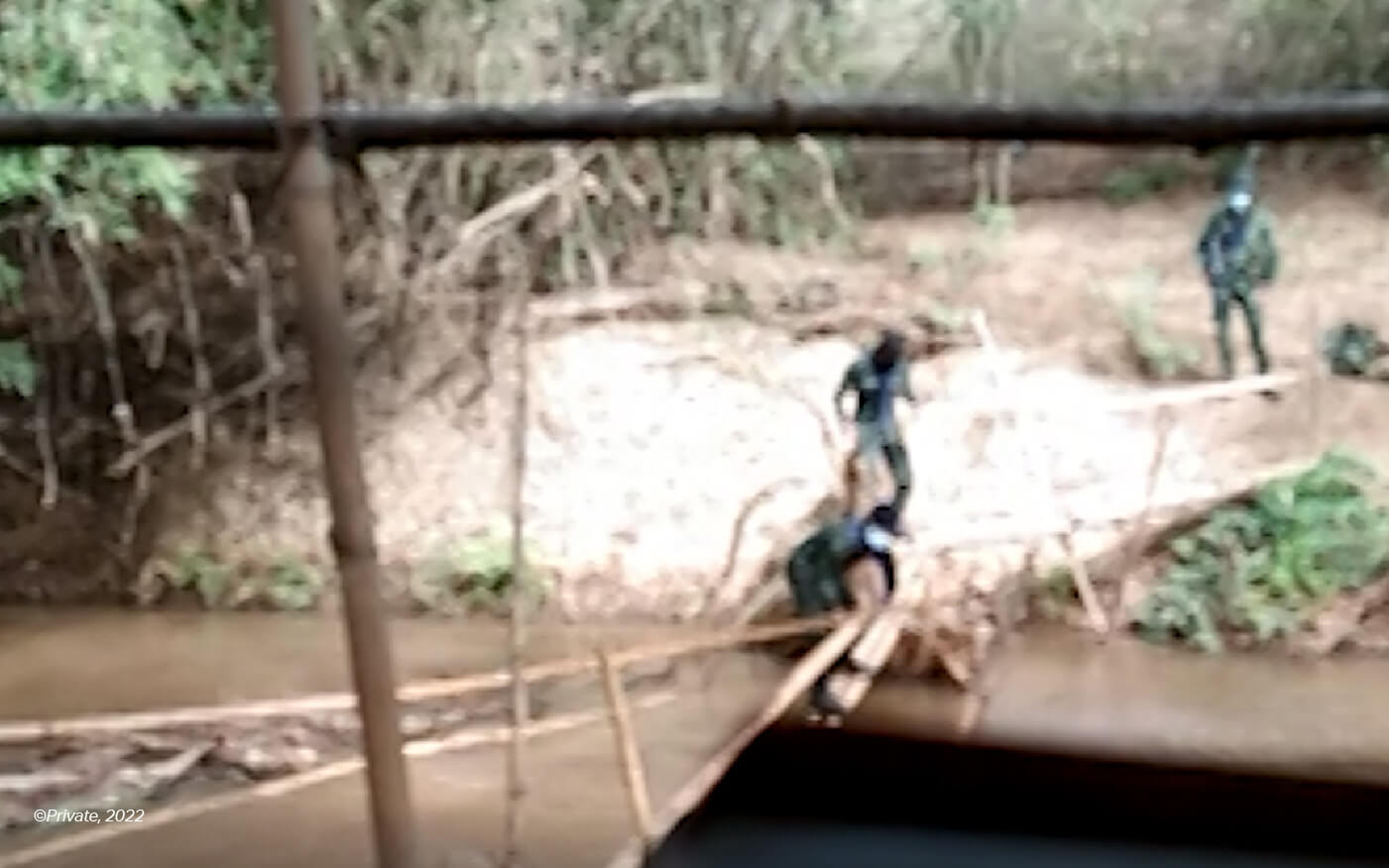 (BANGKOK, May 3, 2022)—The Government of Thailand should investigate the recent destruction by its soldiers of a makeshift cross-border footbridge used by refugees fleeing deadly attacks in eastern Myanmar, said Fortify Rights today. Video footage filmed from the Myanmar side of the border and obtained by Fortify Rights shows uniformed Thai soldiers destroying a footbridge over the Wa Le (also known as the Waw Lay) River, a tributary of the Moei River, which forms part of the border between Thailand and Myanmar. New evidence also implicates Thai authorities in arbitrarily arresting and allegedly extorting refugees in the border town of Mae Sot.

“The Thai authorities should ensure any investigation into the situation on the border is aimed at protecting refugee rights, not further violating them,” said Amy Smith, Executive Director at Fortify Rights. “Arbitrary arrests and the destruction of this footbridge demand urgent attention.”

Video footage taken from the Myanmar side of the Thailand-Myanmar border, obtained and released today by Fortify Rights, shows two uniformed Thai soldiers destroying a small bamboo footbridge over the Wa Le River while another Thai soldier watches them. The footbridge connects Thailand’s Tak Province with Myanmar’s war-torn Karen State, where the Myanmar military has attacked and killed civilians, including children, in recent weeks and months.

In the more than 16-minute-long video, on file with Fortify Rights, one Thai soldier hacks the bridge with a machete, and then another soldier assists him in systematically dismantling the bridge, discarding pieces of it into the river flowing beneath. People speaking a Karen language and a crying infant child can be overheard off-camera. One Thai soldier uses obscene language and issues a death threat in the Thai language to people located off-camera on the Myanmar side of the border, saying: “What are you filming, fucker? You want to die?” By the end of the video, the soldiers entirely dismantled the bridge.
Fortify Rights confirmed the video footage was filmed in March 2022. The exact date and time are on file with Fortify Rights.

Other video footage obtained by Fortify Rights and filmed on January 25, 2022, before the Thai soldiers destroyed the bridge, shows at least 45 people including women, men, and children using the footbridge or lining up to use it in the span of just one minute and 36 seconds. In that video, people from Myanmar, including many children, are moving with careful urgency and carrying sacks, presumably containing personal belongings and provisions. Sources familiar with the bridge and the area told Fortify Rights that Myanmar refugees, especially children and older people, used the bridge to flee violence and persecution and that informal humanitarian workers used it to transport lifesaving aid from Thailand to internally displaced persons (IDPs) in Myanmar.

On February 3, 2022, Fortify Rights spoke with a Thai soldier posted to the banks of the Moei River on the Thailand-Myanmar border. The soldier confirmed that he was part of the Royal Thai Army’s Naresuan Force—a special unit designated to “protect” the Thai border—and told Fortify Rights that he had orders to prevent Myanmar refugees from crossing the river into Thai territory. In March 2021, during the Myanmar junta’s initial post-coup attack on the civilian population, Thai Prime Minister Prayut Chan-o-cha instructed government agencies to prevent “illegal immigration” from Myanmar—a euphemism for blocking refugees. In line with this order, Thai authorities have forced thousands of refugees back to Myanmar.

Since February 2022, Fortify Rights interviewed 15 Myanmar refugees on the Thailand-Myanmar border, including seven women, as well as three U.N. officials and four humanitarian aid workers in Thailand. In addition to the video released today, firsthand testimonies collected by Fortify Rights reveal how Thai authorities have arbitrarily arrested, detained, and allegedly extorted money from Myanmar refugees within the last year.

On April 8, the Associated Press exposed the issuance of so-called “police cards” to refugees from Myanmar through middlemen for an average monthly cost of 350 Thai Baht (US$10). Refugees purchased these unofficial documents in Mae Sot on the premise the cards would help them avoid arrest.

Speaking to the Associated Press, the Thai government “categorically denied” extorting refugees; however, the Royal Thai Police subsequently announced they would investigate the scheme and hold officers responsible. Deputy police spokesperson Krisana Pattanacharoen reportedly said that any police officers “found guilty of such wrongdoing will face criminal charges and be subject to disciplinary punishment.”

Another Myanmar refugee in Mae Sot expressed similar concerns to Fortify Rights, saying: “Even if we have a police card, we are not sure if we will get arrested or not. We never showed the card to anyone. I just paid the money. We are not sure about our security. This is the only document we have.”

Refugees showed Fortify Rights their police cards, which appear to be pieces of paper or small cards of various sizes with hand-written numbers, letters, or symbols on one side. One refugee explained to Fortify Rights, “We have to give two passport-sized photos . . . There’s no official seal or sign.”

“The Thai government should create a formal nationwide system to issue identification cards to refugees that provide genuine protection,” said Amy Smith. “Without such a system in place, refugees in Thailand hope to find protection through the police card scheme. It’s in the government’s interest to facilitate a process in line with international standards to identify and recognize refugees within their borders. Such a process would help prevent extortion and other abuses and provide critical information on new arrivals to Thailand.”

Myanmar refugees also described facing arrest and detention by Thai authorities due to their lack of legal status in Thailand. For example, Thai authorities arrested “Kyaw Aung,” not his real name, and his friend in Mae Sot, ten days after Kyaw Aung fled to Thailand in December 2021 to escape persecution by the junta. Kyaw Aung was a student in Yangon who joined the Civil Disobedience Movement (CDM)—a nationwide campaign to oppose the Myanmar military junta—following the coup.

Kyaw Aung explained to Fortify Rights how the Thai military arrested him and his friend in Mae Sot. He said: “[The] military came with guns.  They asked how we crossed the border. At that moment, we were afraid.”

Thai lawyers working with an organization to support refugees intervened to secure the release of Kyaw Aung and his friend.

Fortify Rights also documented how Thai police arrested “Thu Le,” not his real name, along with his friend in January 2022 at a checkpoint in Mae Sot. Thu Le told Fortify Rights:

Thu Le and his friend spent several hours in detention until a resident of Mae Sot—a friend of Thu Le—intervened with the police to negotiate a payment of 8,000 Thai Baht (US$240) to secure their release.

Thailand lacks a legal framework to recognize and protect refugees. In December 2019, the Thai government enacted a regulation to establish a National Screening Mechanism to “identify people in need of protection and to grant them legal status and access to the necessary public services.” However, the implementation of this mechanism has been slow, and it is uncertain if it will comply with international human rights standards.

Without legal status in Thailand, refugees face criminal penalties under Thailand’s 1979 Immigration Act, which prohibits unauthorized entry or stay in Thailand. As a result, refugees in Thailand are subject to arrest, detention, and forced return or refoulement.

The international law principle of non–refoulement prohibits the “rejection at the frontier, interception and indirect refoulement” of individuals at risk of persecution. It protects refugees and others from forced returns, including by effective refusal of entry at the border. Although Thailand has not ratified the 1951 U.N. Refugee Convention nor its 1967 Protocol, the principle of non–refoulement is part of customary international law. Therefore, it is binding on all states, including Thailand. Under this principle, all countries must protect people from being returned to where they face danger or persecution.

Thailand should ratify the 1951 U.N. Refugee Convention and its Protocol without delay and, in the meantime, offer official registration and temporary protective status to Myanmar refugees, said Fortify Rights.

Since February 1, 2021, the Myanmar military has forced tens of thousands of civilians to flee the country. A 193-page report by Fortify Rights and the Schell Center for International Human Rights at Yale Law School, published on March 24, 2022, documents how the Myanmar junta murdered, tortured, imprisoned, disappeared, forcibly displaced, and persecuted civilians in acts that amount to crimes against humanity. According to the U.N. Office for the Coordination of Humanitarian Affairs, as of April 19, 2022, there are more than 912,700 IDPs in Myanmar, including 566,100 newly displaced persons since the military’s attempted coup.