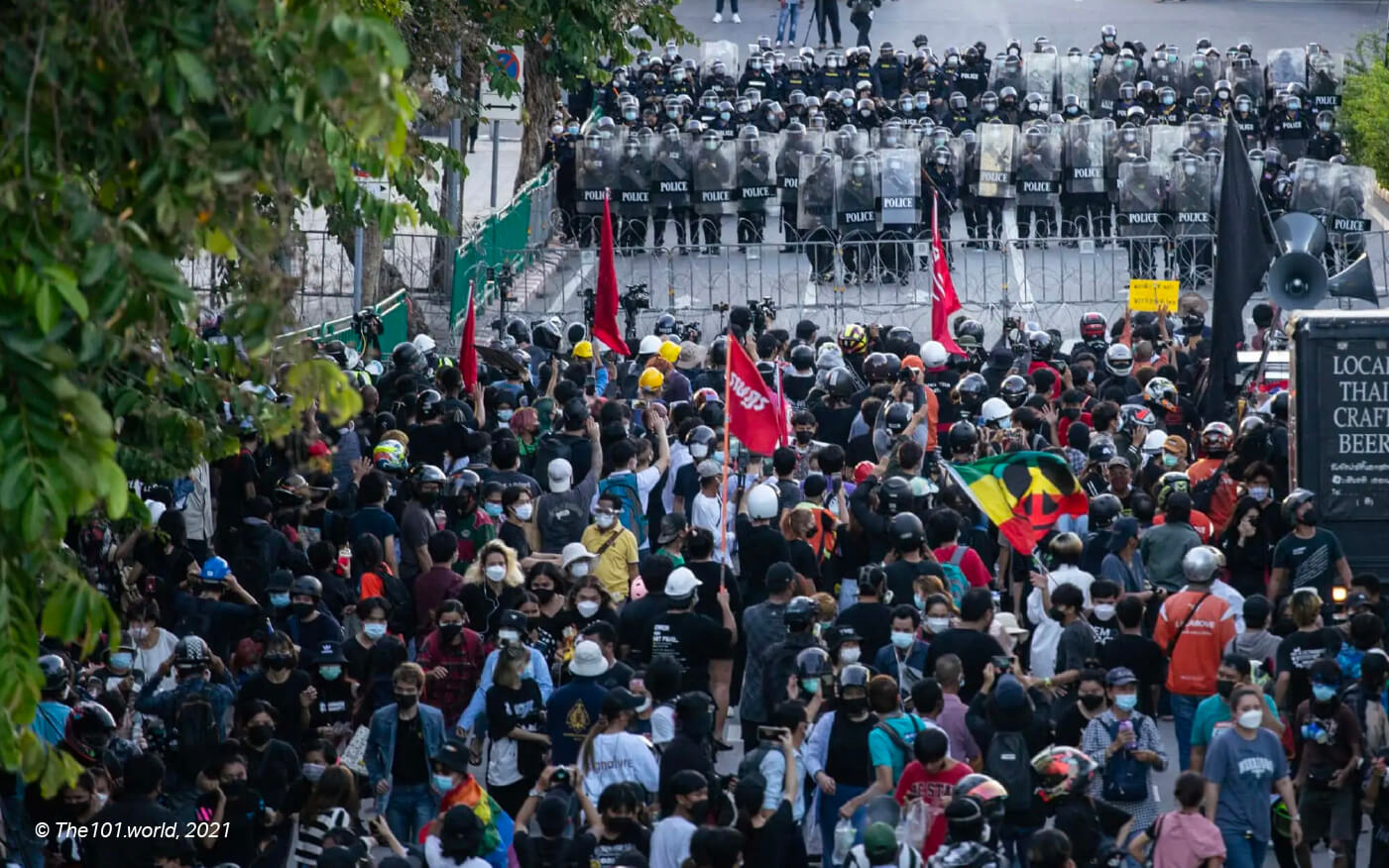 (BANGKOK, September 9, 2021)—The Government of Thailand should protect the rights of peaceful protesters and ensure any restrictions to prevent COVID-19 align with international human rights law, Fortify Rights said today.

Police have reportedly arrested and charged hundreds of peaceful anti-government protesters for allegedly violating restrictions under a state-of-emergency imposed since March 2020 as part of Thailand’s COVID-19 response. The government is reportedly scheduled to meet on September 10 to discuss lifting the state-of-emergency and adopting instead the Communicable Diseases Act as the legal framework to address the COVID-19 pandemic.

“Thai authorities should follow guidance on how to facilitate assemblies while also addressing legitimate public health concerns,” said Amy Smith, Executive Director of Fortify Rights. “COVID-19 should not be used as a pretext to trample basic rights.”

Anti-government protests have continued in Bangkok and elsewhere since February 2020, following the government’s controversial dissolution of the Future Forward Party—a progressive political party that won 81 parliamentary seats during the 2019 elections. Amid the growing protests, on March 25, 2020, the government declared a state-of-emergency due to the COVID-19 pandemic. This declaration, pursuant to Thailand’s 2005 Emergency Decree on Public Administration in Emergency Situations, authorized the prime minister to issue regulations to restrict certain rights, including rights to freedom of expression and peaceful assembly.

Prime Minister Prayut Chan-o-cha has issued a total of 32 regulations under the decree. Some of these regulations include vague and overly broad restrictions on the rights to freedom of peaceful assembly and expression.

For example, Regulation No. 1, issued on March 25, 2020, restricts “the assembly or gathering of persons in a manner that risks spreading the disease” or “any act which may cause unrest in areas determined by the Chief Officer . . .” Regulation No. 1 also prohibits the dissemination of news on COVID-19 that may “instigate fear” among the public or “cause misunderstanding . . . affecting the public order or good morals of the people.”

Violations of the emergency decree law and its regulations are punishable by up to two years in prison and/or a fine of up to 40,000 Thai Baht (US$1,230).

During a press conference on August 3, Deputy Commissioner of the Metropolitan Police Bureau Police Major General Piya Tawichai vowed to take legal action against protesters saying, “[P]rotests and gatherings, or any kind of assembly of more than five persons that risks spreading the disease will be considered a violation of the emergency decree and the Communicable Diseases Act.” He went on to say, “[I]f there are any violations in Bangkok, each alleged individual will be prosecuted in accordance with the law.” He further reminded people that Bangkok—where most large-scale protests have been taking place—is classified as a “maximum and strict control zone” subject to restrictions on public gatherings.

According to Thai Lawyers for Human Rights (TLHR)—a Thai human rights organization providing pro-bono legal services to individuals affected by violations—Thai authorities charged at least 900 protesters and human rights defenders under the emergency decree law between May 2020 and August 31, 2021. Last month alone, TLHR reported that Thai authorities arrested at least 260 people, including 70 children, for their involvement in anti-government protests.

On September 1, Fortify Rights alongside 12 other human rights groups issued an open letter to Prime Minister Prayut Chan-o-cha calling for the release of detained protest leaders.

International human rights law and Thailand’s domestic law protects the rights to freedom of expression and peaceful assembly. Section 36 of the 2017 Constitution of Thailand holds that “a person shall enjoy the liberty of communication by any means,” and Section 44 holds that “a person shall enjoy the liberty to assemble peacefully and without arms.” Thailand is also a state party to the International Covenant on Civil and Political Rights, which guarantees the right to freedom of expression pursuant to Article 19 and the right to peaceful assembly pursuant to Article 21.

Under international human rights law, states may restrict rights to freedom of expression and peaceful assembly but only when such restrictions are necessary, proportionate, and provided by law to accomplish a legitimate aim. The U.N. Human Rights Committee has further clarified in General Comment No. 37 that any restrictions on peaceful assemblies should be based on “a differentiated or individualized assessment.”

While addressing a serious public-health threat, such as COVID-19, is considered a legitimate aim for limiting certain rights, such restrictions must be specifically aimed at preventing disease. The regulations issued under the emergency decree are too vague and overly broad to justify the restrictions on the rights to freedom of expression and peaceful assembly. Furthermore, the criminal penalties provided for violating the emergency decree fail to meet the proportionality requirement.

Amid the pandemic, the U.N. Special Rapporteur on the Rights to Freedom of Peaceful Assembly and of Association issued guidance on April 14, 2020 cautioning governments against seizing on the crisis “to suspend constitutional guarantees, to pass sweeping emergency laws and to rule by decree.” The guidance emphasized that COVID-19 should not serve as a justification for the criminalization of “false news” nor for disproportionate penalties to be imposed.

Thailand has extended its state of emergency 13 times since it came into force on March 26, 2020, most recently on July 22. The Cabinet is required to review the situation every three months, with the current extension in force until September 30.