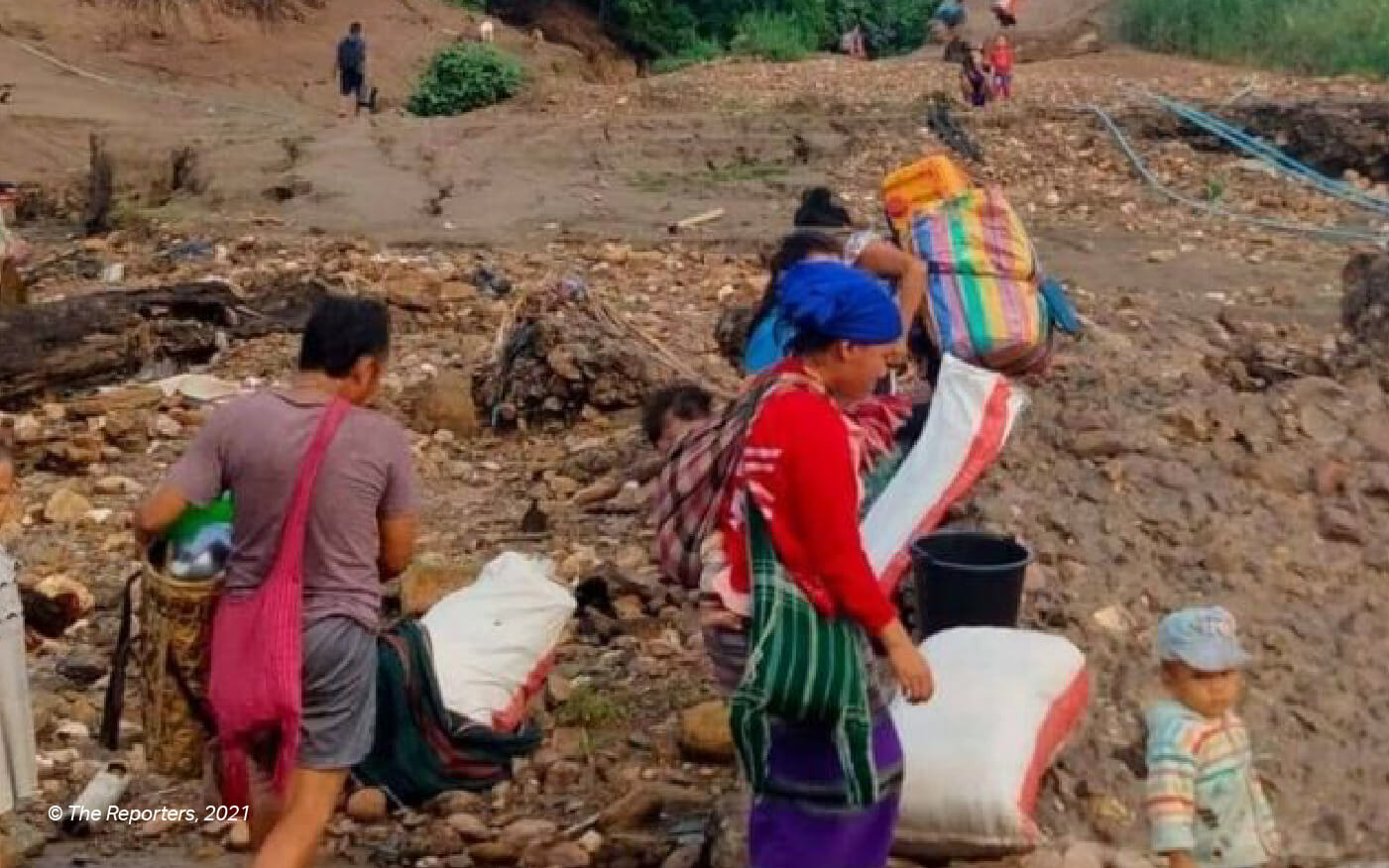 (Bangkok, May 12, 2021)–The Government of Thailand should protect refugees from Myanmar from being forcibly returned and establish protection mechanisms in line with international human rights law, Fortify Rights said today. On March 19, Thai Prime Minister Prayut Chan-o-cha instructed government agencies to prevent “illegal immigration” from Myanmar, according to government meeting minutes. In line with this order, a Thai provincial official confirmed to Fortify Rights that Thai authorities this week returned to Myanmar at least 2,000 refugees fleeing violence in Myanmar’s Karen State.

According to meeting minutes of the Thai Center for COVID-19 Situation Administration (CCSA), dated March 19, Prime Minister Prayut Chan-o-cha instructed the Ministry of Interior, CCSA, and other concerned agencies to “monitor and prevent illegal immigration” along the Thailand-Myanmar border and instructed the Immigration Bureau to “enforce strict inspection of border crossings.” The government has also deployed Royal Thai Army troops and patrol boats to “monitor illegal entry along the western borders both by land and sea,” according to the meeting minutes.

The Thai Government does not recognize refugees and considers undocumented or unauthorized entry or stay in Thailand as “illegal immigration.”

A Thai government official speaking on the condition of anonymity told Fortify Rights that the Ministry of Defense is responsible for coordinating the government’s response to refugees from Myanmar. Among those responsible for this coordination is the Naresuan Force of the Royal Thai Army. The Naresuan Force is a special unit designated to protect the borders of Tak and Mae Hong Son provinces by “interception, retaliation and pushing back foreign forces deemed to violate Thai sovereignty.”

The Naresuan Force held more than 2,100 refugees in makeshift shelters in Mae Sariang District of Mae Hong Son Province after they crossed into Thailand last week to flee attacks in Myanmar. Less than 100 remain in Thailand as of May 11, according to a Thai provincial official.

Civil society actors in Karen State told Fortify Rights that Thai authorities also forced back to Myanmar most of the 5,000 refugees who crossed into Thailand in March and April.

The official also confirmed that the army continues to restrict humanitarian organizations and U.N. agencies, including the U.N. High Commissioner for Refugees (UNHCR), from accessing groups of newly arriving refugees from Myanmar, citing security and COVID-19 health concerns.

“Ensuring protections for refugees is first and foremost a humanitarian issue that demands an appropriate response from the Thai authorities to prevent the loss of life,” said Amy Smith. “Public health concerns due to the COVID-19 pandemic and national security can be addressed and managed through proper screening mechanisms. Rather than restrict and sideline U.N. and humanitarian organizations who are ready to assist, Thai authorities should draw on their technical expertise and resources to facilitate a coordinated response.”

According to the Thai government’s meeting minutes, the prime minister called for “effort” to be made to “prepare an area to host the influx of migrants into Thailand, quarantine facilities and field hospitals.” However, the Thai authorities have yet to announce the construction of facilities for refugees or that refugees will be provided access to quarantine or medical facilities.

On May 6, Thai officials, including Mae Hong Son Governor Sithichai Jindaluang, the Commander of the Special Unit 7thInfantry Regiment, Colonel Sujin Subsin, and Permanent Secretary of Mae Hong Son Province Chanathip Semyam met with UNHCR-Thailand to discuss potential refugee influxes into Thailand and responses. At the time of writing, Thai authorities have yet to approve UNHCR operations to assist new refugees from Myanmar.

UNHCR’s Key Legal Considerations on Access to Territory for Persons in Need of International Protection in the Context of the COVID-19 Response provides that “[d]enial of access to territory without safeguards to protect against refoulement cannot be justified on the grounds of any health risk.”

Myanmar military attacks on civilian areas and clashes between the Myanmar military and ethnic armed groups have displaced more than 55,000 people in Kachin, Karen, and Shan states in Myanmar since February 1 , according to the latest figures from the United Nations Office for the Coordination of Humanitarian Affairs (OCHA) Myanmar. A majority of the displaced, approximately 40,000, were forcibly displaced following renewed clashes between the Myanmar military and the Karen National Liberation Army (KNLA), as well as airstrikes, “indiscriminate attacks,” and “shelling of civilian areas” by the Myanmar military, according to OCHA Myanmar.
Since taking power in a military coup d’état on February 1, the Myanmar junta has continued to kill, arbitrarily arrest, and commit other crimes against political leaders, human rights defenders, peaceful protesters, and others in Myanmar. In a document seen by Fortify Rights and provided by the Myanmar junta to members of the Association of Southeast Asian Nations ahead of a controversial summit to discuss Myanmar last month, the junta claimed that it detained 9,848 persons, released 4,511, and charged 5,070 between February 1 and April 15.

Forcing refugees back to Myanmar violates the principle of non-refoulement, which prohibits the “rejection at the frontier, interception and indirect refoulement” of individuals at risk of persecution. While Thailand has not ratified the 1951 U.N. Refugee Convention nor its 1967 Protocol, the principle of non-refoulement is part of customary international law and is therefore binding on all states. Under this principle, all countries are obligated to protect people from being returned to where they face danger or persecution, including through informal returns.

The Thai government has repeatedly expressed a commitment to protect refugees, including by adopting the Global Compact for Safe, Orderly, and Regular Migration and endorsing the Global Compact on Refugees during the U.N. General Assembly in December 2018. The Thai government also affirmed a commitment to “humanitarianism and to take care of various groups of irregular migrants” during the U.N. Human Rights Committee review of Thailand’s obligations under the International Covenant on Civil and Political Rights in March 2017.

On December 24, 2019, the Thai Cabinet endorsed regulations to establish a national screening mechanism to identify and potentially protect refugees. However, the mechanism has yet to be implemented and has come under criticism from human rights groups for failing to meet international standards.

Thailand currently hosts more than 100,000 refugees, most of whom are protracted refugees from Myanmar living in temporary shelters along the Thailand-Myanmar border, as well as refugees from various countries living in Bangkok and surrounding provinces. All refugees in Thailand lack formal legal status and are at risk of arbitrary detention and being forcibly returned to countries where they may face persecution.

“Thailand still views refugees primarily through a national security lens, but the only real threat to regional peace and security is the Myanmar junta,” said Amy Smith. “If Thailand wants to protect its own security, it should protect the people of Myanmar and work with the international community to deprive the junta of its weapons and financial resources.”