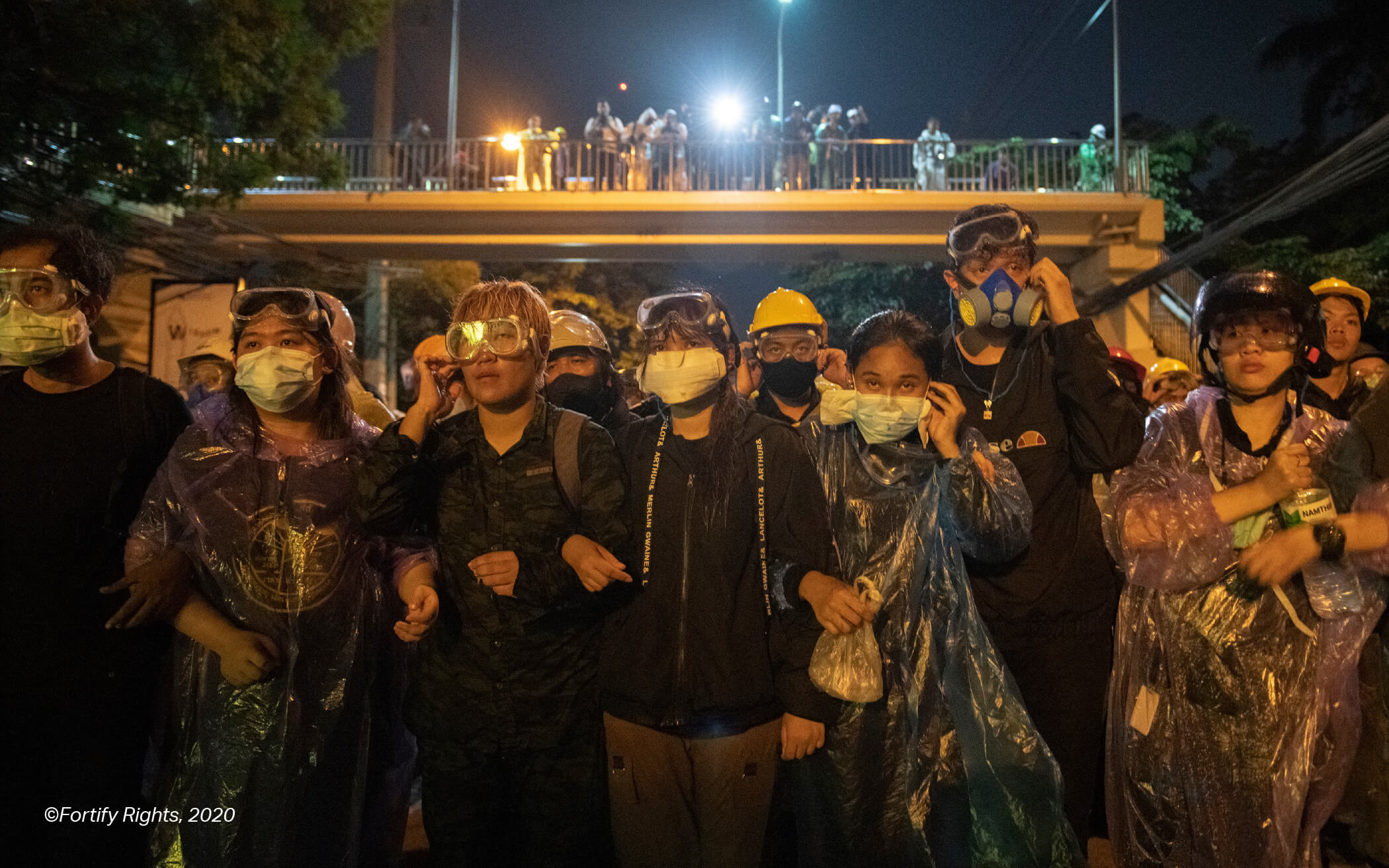 Dozens injured during protests outside parliament building in Bangkok yesterday

(BANGKOK, November 18, 2020)–The Government of Thailand should protect protesters and facilitate the right to peaceful assembly in ongoing protests, Fortify Rights said today. At least 50 people were injured during protests Tuesday after police used tear gas and water cannons against demonstrators and failed to prevent clashes with rival protesters.

“Thai authorities not only failed to uphold their responsibilities to protect protesters and facilitate peaceful protests, they contributed to chaos and injuries,” said Amy Smith, Fortify Rights Executive Director. “The injuries protesters sustained could have been prevented if the police had taken appropriate actions.”

On November 17, police used tear gas and water cannons believed to be laced with chemical irritants against protesters, leaving at least 32 people injured or in need of medical treatment. Another 19 people sustained injuries during clashes between anti-government and pro-monarchy protesters, including at least six people who were reportedly shot during the clashes. Police appeared to withdraw from the area where rival protesters had gathered, enabling clashes between the groups to ensue.

Thousands of student-led protesters gathered at the parliament building around 3 p.m. to call on legislators to accept proposed amendments to the Thai constitution. Protesters also called for the resignation of Prime Minister Prayut Chan-o-cha and for reforms to the monarchy. Pro-monarchy protesters gathered in smaller numbers to oppose their efforts.

The police erected roadblocks using barbed wire and cement-traffic dividers to block protesters from reaching the parliament building. Around 5 p.m., anti-government protesters breached a barricade set up by police at Kiak Kai intersection near the parliament building. At this point, police retreated from the intersection and rival protesters proceeded to throw rocks and other objects at one another during clashes that lasted more than four hours.

International human rights law and Thailand’s domestic law protect the right to freedom of peaceful assembly. The right is enshrined in Article 21 of the International Covenant on Civil and Political Rights, to which Thailand is a State Party, and Section 44 of the 2017 Thailand Constitution.

The right to peaceful assembly also imposes a positive obligation on state actors and their agents to protect and facilitate peaceful assemblies. The U.N. Human Rights Committee has held that states must “protect participants against possible abuse by non-State actors, such as interference or violence by other members of the public, counter-demonstrators and private security providers.”

“The fact that an assembly provokes or may provoke a hostile reaction from members of the public against participants, as a general rule, does not justify restriction; the assembly must be allowed to go ahead, and its participants must be protected,” the Human Rights Committee has said.

The Special Rapporteur on Freedom of Peaceful Assembly and Association has also noted that such an obligation means authorities should allow protesters, as much as possible, to hold their assemblies within “sight and sound” of the intended target audience and not interfere with protesters’ access to public spaces, such as streets and roads.

International guidance from the U.N. High Commissioner for Human Rights on the use of water cannons also states that “In general, water cannon [sic] should only be used in situations of serious public disorder where there is a significant likelihood of loss of life, serious injury or widespread destruction of property.” On the use of chemical irritants, such as tear gas and chemical-laced water, the guidance demands that “chemical irritants that contain hazardous levels of active agents shall not be used.”

“Tuesday’s clashes should not be used as a pretext by the Thai authorities for any limitations on the right to freedom of peaceful assembly,” said Amy Smith.