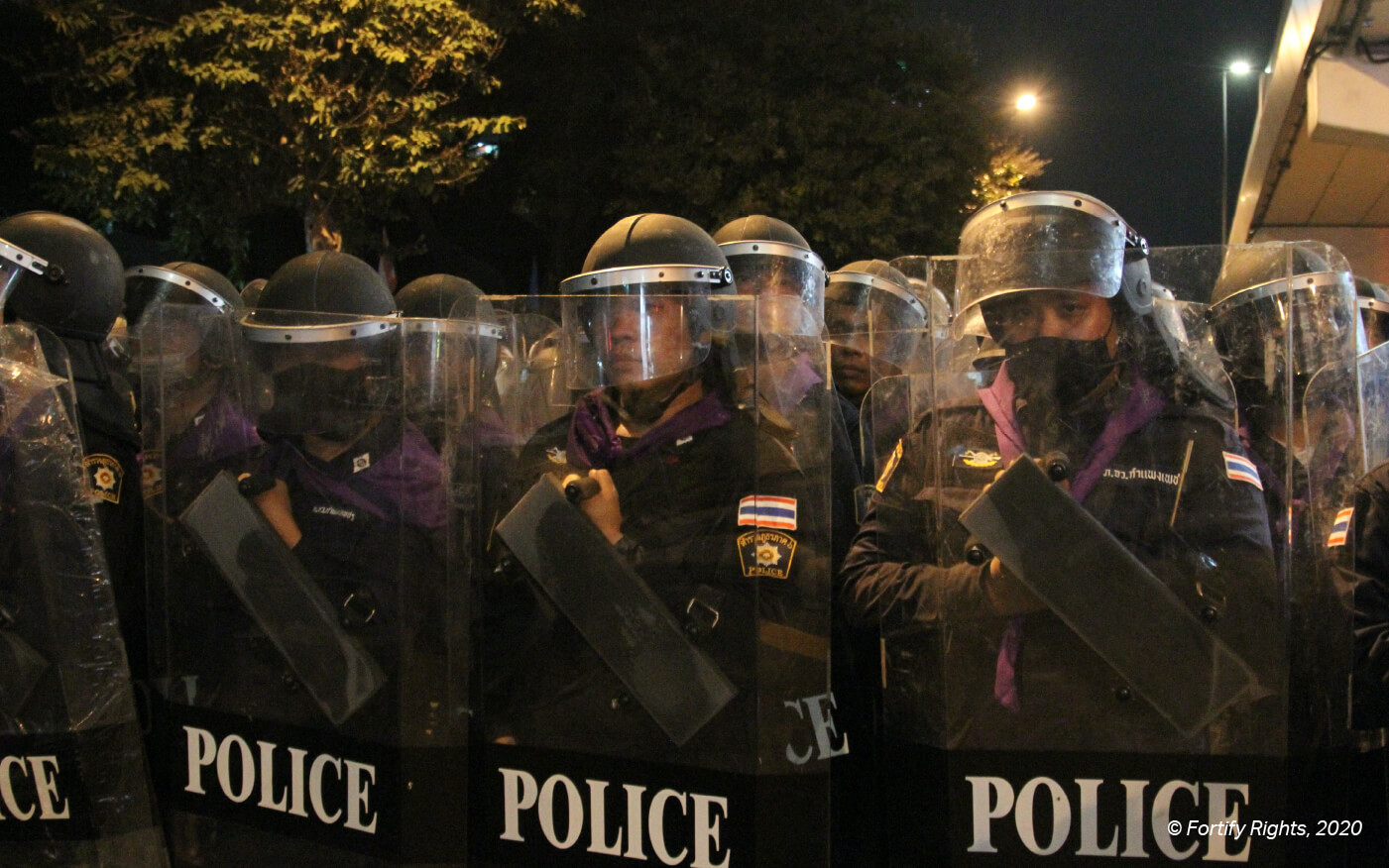 (BANGKOK, October 23, 2020)—The Government of Thailand should facilitate the right to peaceful assembly in ongoing student-led protests and drop charges against activists calling for political reforms, Fortify Rights said today. On October 22, the Thai government lifted the “Severe State of Emergency Decree” but extended a nationwide emergency decree related to the COVID-19 pandemic.

More than 80 protesters face charges for their involvement in the protests.

“The government did the right thing in lifting the emergency decree,” said Amy Smith, Executive Director of Fortify Rights. “More protests are planned and the government should aim to work with protest leaders rather than lock them up.”

In announcing the decision to extend the COVID-19 emergency decree to November 30, 2020, Thailand Deputy Prime Minister Wissanu Krea-ngam told journalists following a meeting of the Council of Ministers of Thailand that “the state of emergency [imposed in Bangkok] is lifted. But if anything happens, we can impose it again.”

Since October 13, thousands of protesters have joined student-led demonstrations on an almost daily basis in Bangkok and around the country. The protesters’ demands include a new constitution, reforms of the monarchy, and the resignation of the prime minister. In response to the protests, on October 15, Thai Prime Minister General Prayut Chan-o-cha declared a “Severe State of Emergency Decree” in the Bangkok area.

The current emergency decree related to COVID-19 and the previous “severe state of emergency” are enforceable under the 2005 Emergency Decree on Public Administration in Emergency Situations law, which allows the prime minister, with approval from the Council of Ministers to declare an emergency. Under Section 9 of the law, the prime minister has the power to ban gatherings, prohibit communications that “may instigate fear” or “distort information which misleads understanding of the emergency situation,” prohibit the “use of routes or vehicles,” and other powers. Under Section 11—which is reserved for situations of “terrorism, use of force, harm to life, body or property, or . . . a severe act which affects the security of state, the safety of life or property of the state or person”—the prime minister has more expansive powers, including the power to arrest and detain “persons suspected of having a role in causing the emergency situation.”

In the days following the issuance of the emergency decree in Bangkok under section 11, the government drew on these powers to crack down on protesters: shutting down public transportation around protest sites, banning gatherings of five or more people, arresting and detaining those believed to be leaders of the protests, threatening social media users, and censoring news outlets. On October 16, police used water cannons to disperse peaceful protesters.

Thai authorities have arrested at least 90 protesters since the start of the protests on October 13, according to Thai Lawyers for Human Rights. Of those arrested, eight are still detained and 84 face prosecution on charges ranging from traffic misdemeanors to serious criminal offenses, including sedition and crimes under the Computer Crimes Act.

Three activists—Suranat Panprasert, 35, Ekachai Hongkangwan, 45, and Boonkueanoon Paothong, 21—face potential life sentences in relation to an incident on October 14 where peaceful protesters gathered on Phitsanulok Road near Government House in Bangkok, delaying the passing motorcade of Queen Suthida Bajrasudhabimalalakshana and Prince Dipangkorn Rasmijoti. The authorities charged the three activists under Article 110 of the Thailand Criminal Code, which prohibits acts of violence against the Queen and other members of the royal family and carries a maximum sentence of life in prison.

International human rights law and Thailand’s domestic law protect the right to freedom of peaceful assembly of everyone in Thailand. The right is enshrined in Article 21 of the International Covenant on Civil and Political Rights (ICCPR), to which Thailand is a State Party, and Section 44 of the 2017 Constitution of the Kingdom of Thailand.

Under international human rights law, states may restrict assemblies only when such restrictions are provided by law, proportional, and necessary to accomplish a legitimate aim, such as “to protect national security, public health or morals or the rights and freedoms of others.” Amid the COVID-19 global pandemic, the U.N. Special Rapporteur on the Rights to Freedom of Peaceful Assembly and of Association issued guidance on April 14, 2020 cautioning governments against seizing on the crisis “to suspend constitutional guarantees, to pass sweeping emergency laws and to rule by decree . . .”

Concerns of potential of violence during protests, as expressed by the prime minister, also would not justify restrictions on the right to peaceful assembly. For example, the U.N. Human Rights Committee—a body of experts that provides authoritative guidance on the interpretation of the ICCPR—held, “The fact that an assembly provokes or may provoke a hostile reaction from members of the public against participants, as a general rule, does not justify restriction; the assembly must be allowed to go ahead, and its participants must be protected.” The Human Rights Committee further noted that states must “protect participants against possible abuse by non-State actors, such as interference or violence by other members of the public, counter-demonstrators and private security providers.” Under international law, the right to peaceful assembly includes a positive obligation on states and their agents to facilitate peaceful assemblies and protect protesters.

International human rights law and Thai law also protect the right to liberty under Article 9 of the ICCPR and Section 28 of the Thailand Constitution. Arrest and detention are considered arbitrary when individuals are arrested or detained for exercising rights protected by international human rights law, including the rights to freedom of expression and peaceful assembly.

“By cracking down on protesters, the Thai government has failed to uphold its responsibility under international law,” said Amy Smith. “The authorities should release detained protesters, drop the charges filed against them and others, and engage in a rights-respecting dialogue with those peacefully calling for change.”