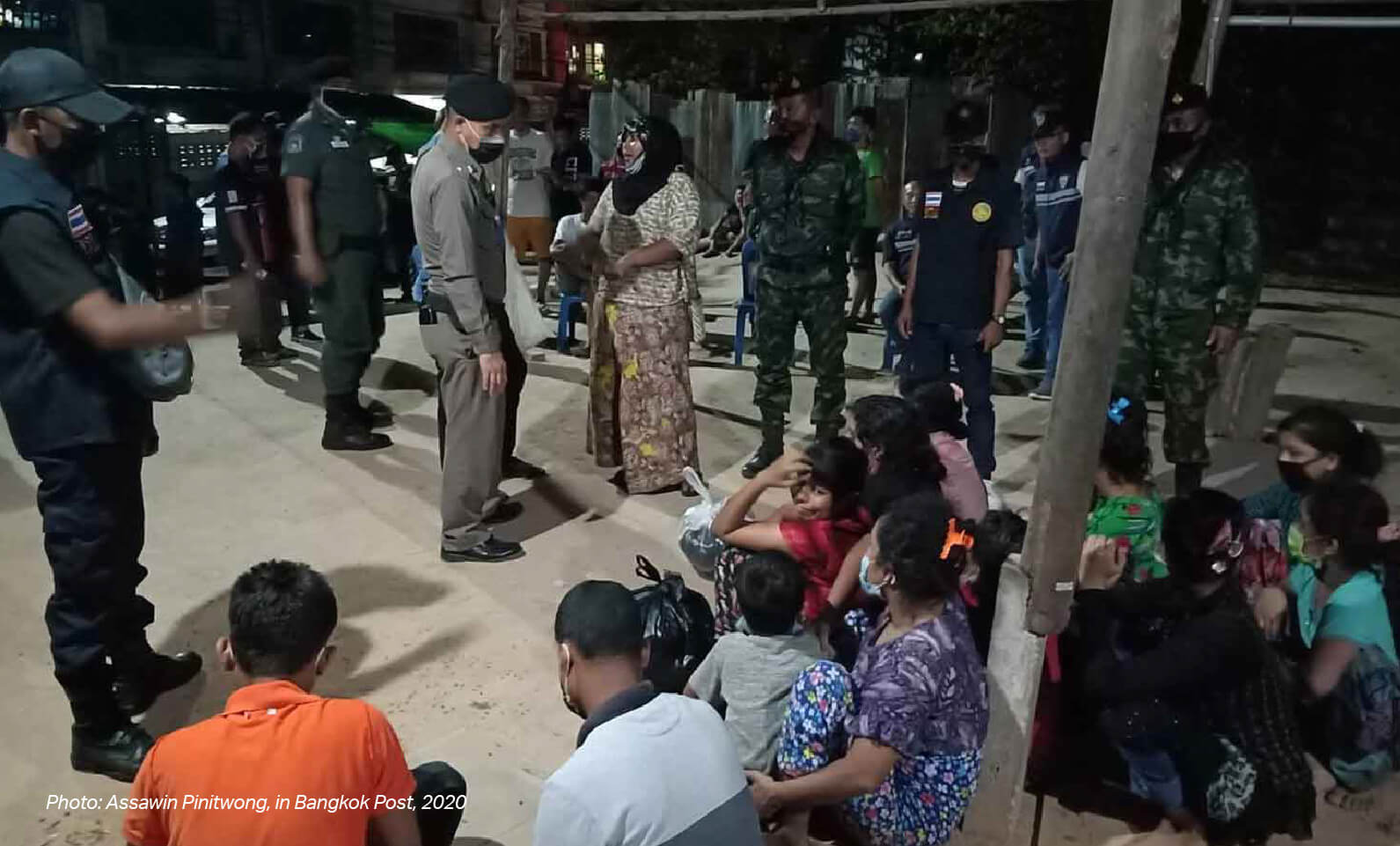 Thailand threatens to return 35 Rohingya, including six women and 16 children, to Myanmar

(BANGKOK, June 5, 2020)—The government of Thailand should prevent the indefinite detention or forced return of Rohingya refugees and possible survivors of human trafficking, Fortify Rights said today. Thai authorities are detaining at least 35 Rohingya men, women, and children in the Tak Immigration Detention Center (IDC) and threatening to return them to Myanmar, where they face certain persecution.

“The answer to the Rohingya refugee situation is not to lock them up, deny their identity, or send them back to Myanmar,” said Amy Smith, Executive Director of Fortify Rights. “Thai authorities have a duty to identify and protect all refugees and survivors of trafficking, including Rohingya.”

Between  May 7 and June 1, Thai security forces discovered and arrested 35 Rohingya, including six women and 16 children, in the Thailand-Myanmar border town of Mae Sot in Tak Province. All 35 are now in the Tak IDC.

Fortify Rights received information that the 35  Rohingya traveled overland for approximately one to three months from Myanmar’s Rakhine State and camps in Cox’s Bazar before arriving in Thailand. At least four Rohingya reportedly died en route. According to information received, brokers collected payments of 500,000 to 900,000 Myanmar Kyat (about US$350 to US$645) for transportation to Malaysia and required some to provide further payments upon arrival in Malaysia. Some of those traveling with the now detained group of Rohingya escaped arrest by security forces in Thailand, and their well-being and whereabouts are unknown.

On May 27, Police Colonel Sangkhom Tatso, Superintendent of the Tak Immigration Office, denied Fortify Rights’ request to speak with the detainees and denied that the detainees are Rohingya.“We don’t have Rohingya in the IDC, only Myanmar Muslims,” Police Colonel Sangkhom told Fortify Rights. “We will return them, but not now as the Myanmar government, at the moment, is focused on the return of documented migrants.”

Police Colonel Sangkhom told Fortify Rights that the detainees will be returned to Myanmar when the COVID-19 situation eases.

Fortify Rights confirmed through multiple sources that the detainees are ethnic Rohingya from Rakhine State, Myanmar. The Government of Myanmar is on trial at the International Court of Justice for genocide against Rohingya in 2016 and 2017.

There is also reason to believe that the 35 detainees may be survivors of human trafficking; however, Fortify Rights believes the Thai authorities have yet to screen the detainees properly.

On May 14, Tak Provincial Governor and Chair of the Tak Communicable Disease Committee Orassit Samphantharat released announcement no. 19/2563 on measures to prevent COVID-19 transmissions, warning of possible movements of Muslims from Myanmar and Bangladesh entering Thailand. The announcement states: “Tak is a province bordering the country of Myanmar that has movements of [migrant] workers, and also the COVID-19 pandemic in Myanmar and Bangladesh is still happening, and patients are still being found. Muslim people from both countries are expected to move to Tak Province.”

“Rohingya are refugees in need of protection. The COVID-19 pandemic does not justify the arbitrary detention or forced return of refugees,” said Amy Smith. “Rights matter and must be respected for refugees and other people on the move, particularly during the pandemic.”

In response to the COVID-19 pandemic, the U.N. Working Group on Alternatives to Immigration Detention and the Office of the High Commissioner for Human Rights urged states to end immigration detentions and release detainees “to protect the rights and health of migrants and staff in immigration detention facilities.”

Under international law, refugees should never be detained solely on the basis of their immigration status.

Although the Thai government signed a memorandum of understanding on January 21, 2019 to facilitate alternatives to detention for refugee and migrant children, Thai authorities continue to detain children in immigration detention facilities.

In addition to ending the indefinite and arbitrary detention of refugees, Thai authorities should also screen the 35 detainees to determine if they are survivors of trafficking, Fortify Rights said.

Under the U.N. Protocol to Prevent, Suppress and Punish Trafficking in Persons, trafficking is defined as: 1) the act of “recruitment, transportation, transfer, harbouring or receipt of persons,” 2) through the means of threat or use of force or other forms of coercion, abduction, fraud, deception, abuse of power or position of vulnerability, or the giving or receiving of payments or benefits “to achieve the consent of a person having control over another person,” and 3) a purpose of exploitation, including sexual exploitation, forced labor or services, slavery or practices similar to slavery, servitude, or the removal of organs.

The U.N. Protocol obliges states to protect survivors of human trafficking, including by providing for the “physical, psychological and social recovery of victims of trafficking in persons.” This includes housing, counseling and information, medical, psychological, and material assistance, and employment, educational, and training opportunities.

The U.S. Trafficking in Persons Report 2019 ranked Thailand as a Tier-2 country for failing to meet minimum standards to combat trafficking in persons and recommended improvements in the capacity of law enforcement to identify and ensure protections for survivors.

The principle of non-refoulement under customary international law prohibits states from returning any person on its territory or under its jurisdiction to a country where they may face persecution. Under the Bali Process on People Smuggling, Trafficking in Persons and Related Transnational Crime, of which Thailand is a member, the principle of non-refoulement is recognized as necessary to combat human trafficking.

An estimated 600,000 Rohingya remain in Rakhine State, Myanmar, and continue to face genocide and other international crimes as well as restrictions of basic rights, including freedom of movement and equal access to full citizenship rights. Upwards of one million Rohingya refugees live in overcrowded and poorly equipped refugee camps in Bangladesh. For years, Rohingya refugees have boarded ships controlled by transnational human trafficking syndicates, making their way to Thailand and Malaysia.