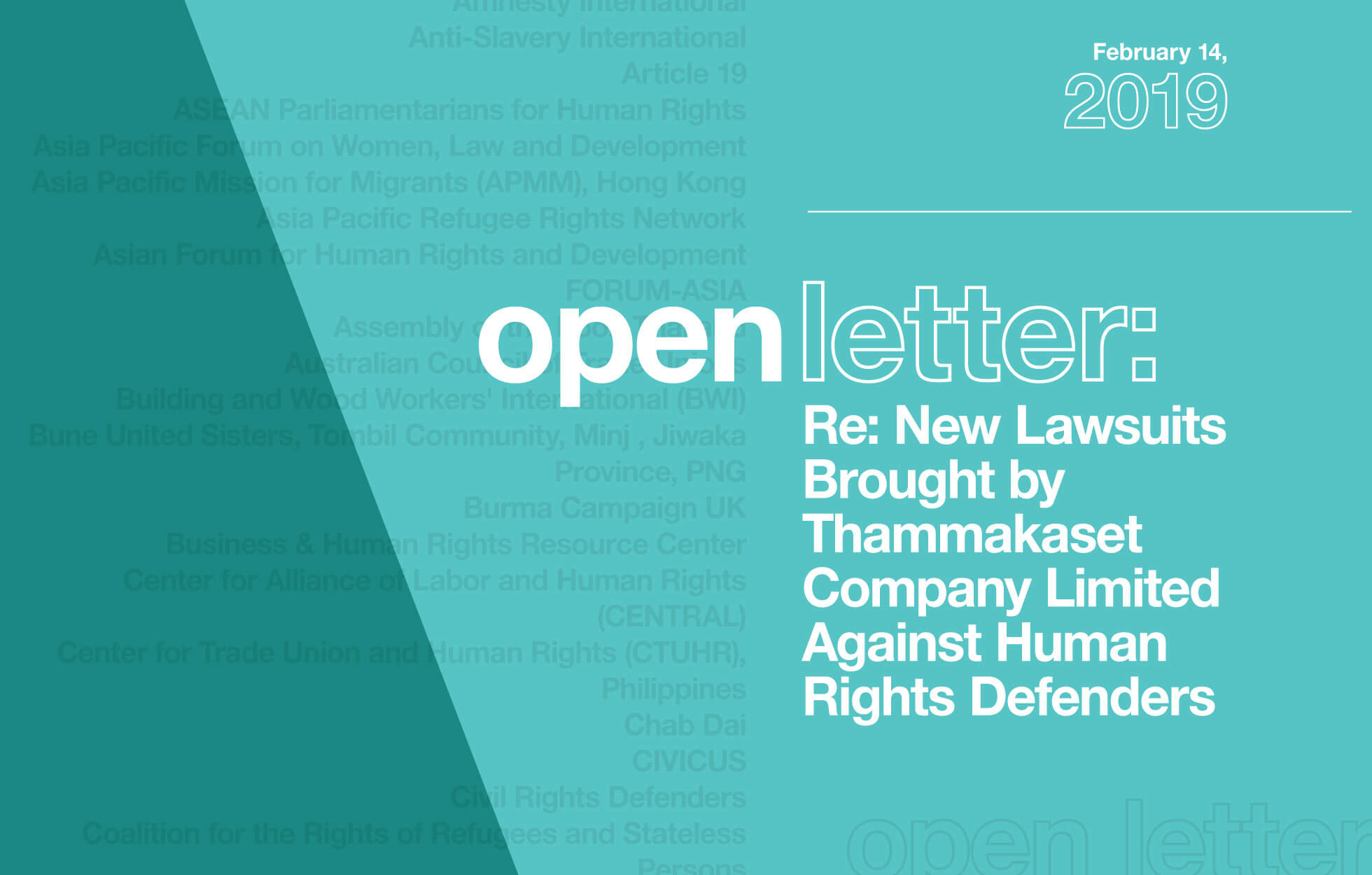 “These cases are bad for human rights, bad for business, and bad for the country,” said Amy Smith, Executive Director of Fortify Rights. “Thai authorities should ensure these complaints are immediately dropped, and the government should put in place protections to prevent judicial harassment.”

Since 2016, Thammakaset—a Thai-owned poultry company in Lopburi Province—has filed upwards of 13 criminal and civil cases against at least 20 human rights defenders, including former employees who exposed labor rights abuses. While Thai authorities and courts have dismissed most of the complaints, some are still pending and, in November 2018, a company representative pledged to bring more.

Thammakaset first filed criminal complaints against 14 of its former employees in October 2016 after the employees reported labor rights abuses to the Department of Labor Protection and Welfare (DLPW) and the National Human Rights Commission of Thailand (NHRCT). The DLPW and NHRCT each subsequently found evidence of labor rights abuses by Thammakaset, including that the company failed to pay minimum and overtime wages and failed to provide adequate leave to workers as required by law.

On January 15, 2019, the Supreme Court upheld a lower court’s order requiring Thammakaset to pay 1.7 million Thai Baht (US$51,470) in compensation to the 14 former employees for violations of Thailand’s Labor Protection Act.

“Thai courts have repeatedly ruled in favor of human rights defenders facing charges by Thammakaset,” said Amy Smith. “The police and prosecutors have discretion to dismiss baseless complaints before they reach the courts, and with regard to this company, they should exercise that discretion.”

“We are alarmed that Thai authorities are proceeding to investigate and prosecute these complaints by Thammakaset,” said the 89 signatories to the letter. “These new charges filed by Thammakaset constitute harassment by the company” and “waste valuable time and resources of police, prosecutors, and judicial officers.”

“The cases brought by Thammakaset are emblematic of Strategic Litigation against Public Participation (SLAPP) lawsuits,” the letter states. The signatories called on the Thai government to “clearly demonstrate its opposition to SLAPP lawsuits, such as the ones filed by Thammakaset,” and to “decriminalize defamation and end imprisonment or fines as penalties for acts of defamation.”

“SLAPP suits pose serious threats to human rights defenders and others and reflect poorly on the climate for investment in Thailand,” said Amy Smith. “We encourage the government to equip public prosecutors and the Attorney General with adequate resources to screen out unwarranted complaints against human rights defenders.”