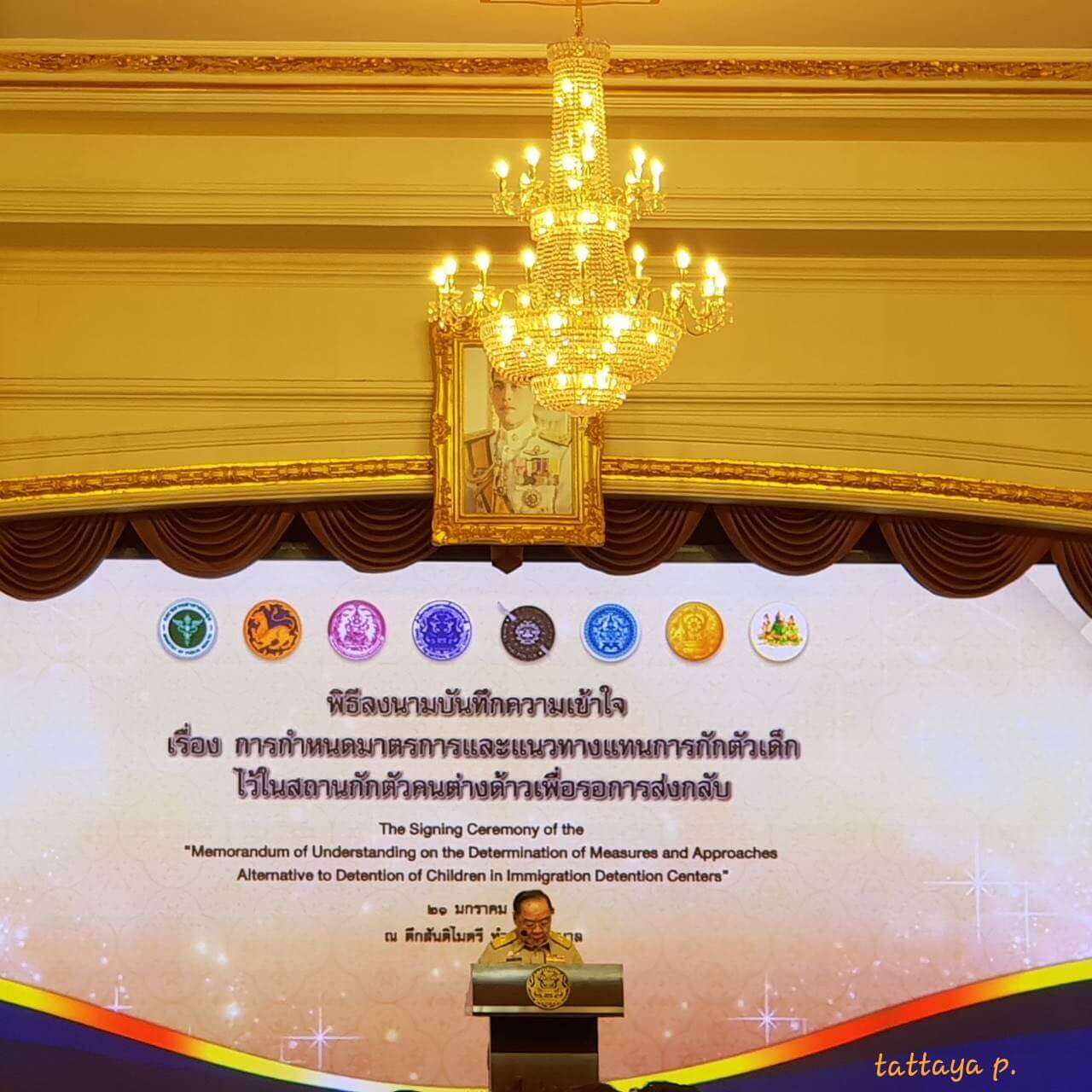 (BANGKOK, January 21, 2019)—The Government of Thailand should immediately release all refugees arbitrarily detained in the country and adopt measures to reunite separated families, Fortify Rights and six other organizations said today in a joint statement. The organizations welcomed an agreement signed today by the Government of Thailand to stop detaining migrant children.

“Thailand took a positive step forward today to protect the rights of refugees and children, but concerning gaps remain,” said Amy Smith, Executive Director at Fortify Rights. “The MoU doesn’t address the separation of families, and detained refugee mothers are still required to pay exorbitant bail fees simply to reunite with their children, while fathers remain in detention.”

The Deputy Prime Minister General Prawit Wongsuwan along with representatives of the Royal Thai Police, Ministry of Social Development and Human Security, Ministry of Foreign Affairs, Ministry of Interior, Ministry of Health, Ministry of Education, and Ministry of Labour signed the Memorandum of Understanding on the Determination of Measures and Approaches Alternative to Detention of Children in Immigration Detention Centers today in Bangkok.

The MoU acknowledges that children should only be detained as a measure of last resort and the period of detention should be as brief as possible. In addition to prioritizing the best interest of the child, the MoU affirms the government’s responsibility to ensure children remain under the care of their family and should only be transferred into the custody of government or privately-run shelters as a measure of last resort. The government adopted detailed procedures to implement these provisions.

In their joint statement, Fortify Rights, the Asia Pacific Refugee Rights Network, Asylum Access Thailand, the Center for Asylum Protection, the Coalition for the Rights of Refugees and Stateless Persons, Human Rights Watch, and the Migrant Working Group said “further efforts are necessary to protect the best interests of the child and to bring Thai policy and practice in line with international standards.”

The organizations highlighted that “migrant mothers are only granted release from immigration detention following a cash bail payment of 50,000 Thai Baht (US$1,500) to reunite with children in holding shelters.” The required bail payment is “exorbitant for most migrants and, particularly, refugees, who are prohibited from working in Thailand,” the organizations said, adding that the provision of bail does not extend to fathers of migrant children.

The organizations also expressed concern about Thailand’s ongoing immigration raids that “result in the arbitrary arrest and detention of children and refugees.” Since October 2018, Thai authorities have arrested thousands of migrants throughout Bangkok and other Thai cities, including children and refugees recognized by the United Nations High Commissioner for Refugees.

“These raids create an environment of fear and terror among refugees, who require protection,” said Amy Smith. “To prevent child detention and the separation of families, Thai authorities should grant legal status and basic rights to refugees living in Thailand.”

Thailand is state party to the U.N. Convention on the Rights of the Child (CRC), which prohibits the arbitrary or unlawful detention of a child. The CRC also allows for the separation of a child from his or her parents against their will only when “competent authorities subject to judicial review determine . . . that such separation is necessary for the best interests of the child.” Article 22 of the Child Protection Act of 2003 requires the best interest of the child to be given primary importance when considering the treatment of a child.

Thailand should immediately ratify the 1951 U.N. Refugee Convention and its 1967 Protocol, Fortify Rights and the other signatories to the joint statement said today.

On January 10, 2017, the Thai government adopted a cabinet resolution to develop a legal framework to identify and recognize refugees but has yet to enact legislative measures to make it a reality.

“Even with today’s MoU, Thai law still doesn’t recognize or protect refugees,” said Amy Smith. “Without concrete legislative action, refugees who are unable or unwilling to return to their home countries are likely to face prolonged or indefinite detention in Thailand.”