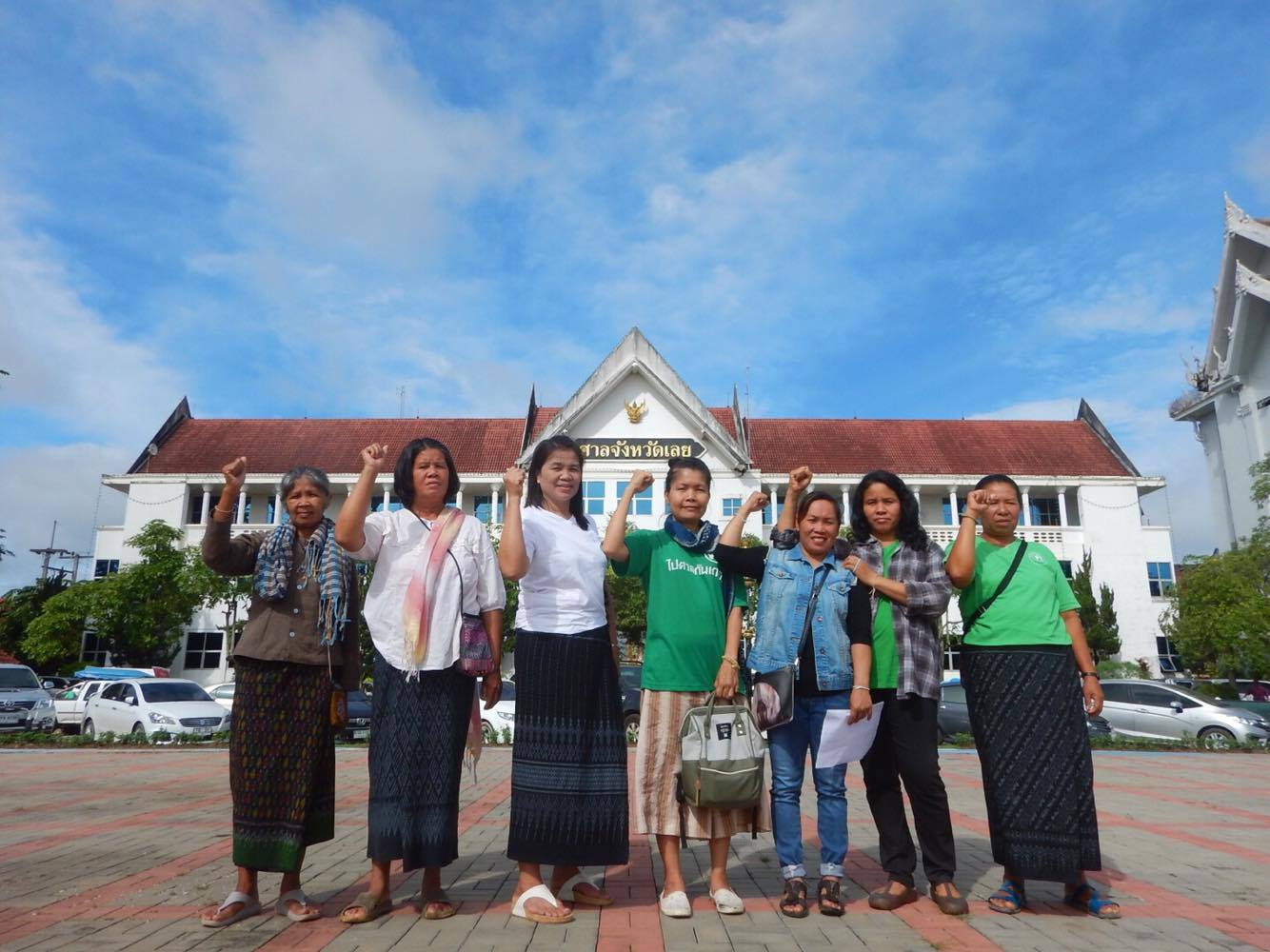 “This case violates the right to peaceful assembly in Thailand and undermines the government’s stated commitments,” said Amy Smith, Executive Director of Fortify Rights. “The court has an opportunity to uphold fundamental rights protected in both Thai and international law. The charges against these seven women should be dismissed.”

On November 16, 2016, more than 200 residents from Na Nong Bong village gathered at the Khao Laung Sub-District Administrative Council Office in Loei Province to oppose a request by Tungkum Limited gold-mining company to use land in the area for mining operations. The protesters also called for the council to involve them in the decision-making process.

On July 25, 2017, the Loei Provincial Prosecutor charged the seven women, who are all members of Khon Rak Ban Kerd Group (KRBKG)—a community-based environmental rights group—with allegedly violating Section 309 of the Thai Criminal Code and Article 8 of the 2015 Public Assembly Act.

“I have no fear of the lawsuit,” said Boonraeng Srithong, one of the women charged and a member of KRBKG. “I am not afraid of the trial or jail. The main reason we continue the fight is because we want our children to have a home.”

KRBKG members and Loei residents have long advocated for the permanent closure of the gold mine and rehabilitation of the environment. They allege that the mining operation in Loei has negatively affected their health and environment.

KRBKG members and environmental defenders in Loei have faced a series of legal proceedings in connection with their peaceful activism.  In 2017 alone, Thai authorities in Loei Province brought at least three new criminal cases against 13 members of KRBKG for their alleged involvement in protests against the gold mine at the local administrative office. In addition to the current charges brought by the state, Tungkum Ltd. has brought at least 19 criminal and civil complaints against 33 residents since 2007.

Under international human rights law, states have an obligation to protect the rights to freedom of peaceful assembly and expression. The International Covenant on Civil and Political Rights (ICCPR), to which Thailand is a party, and the Declaration on Human Rights Defenders protect human rights defenders in the context of their work, including their rights to peaceful assembly and expression.

Under Article 21 of the ICCPR, states may only restrict peaceful assemblies when restrictions are provided by law, proportional, and necessary to accomplish a legitimate aim. Criminal penalties for peaceful protests that temporarily block access to a public building or roads are considered disproportionate under international law.

In a joint report to the Human Rights Council in February 2016, the U.N. Special Rapporteur on the Rights to Freedom of Peaceful Assembly and Association and the Special Rapporteur on Extrajudicial, Summary or Arbitrary Executions also stated that, “[w]here there has been a failure to properly notify, organizers, community or political leaders should not be subject to criminal or administrative sanctions resulting in fines or imprisonment.”

Provisions of Thailand’s 2015 Public Assembly Act are incompatible with international law and have been used to obstruct and restrict the legitimate activities of environmental defenders.

The Government of Thailand should immediately amend the 2015 Peaceful Assembly Act to bring it in line with international standards and ensure it protects the rights to peaceful assembly, said Fortify Rights.

At the conclusion of its first official visit to Thailand in April 2018, the United Nations Working Group on Business and Human Rights expressed concern with “unreasonable and unwarranted restrictions on the right of affected people to raise legitimate concerns and protest peacefully.” The Working Group further called on the government to “end recurring attacks, harassment and intimidation of human rights defenders, union leaders and community representatives who speak out against business-related human rights abuse.”

“These seven women face prison for taking a stand on their land,” said Amy Smith. “They’re working for a brighter future of Thailand and protect the environment.”