Resources on the Rohingya Genocide 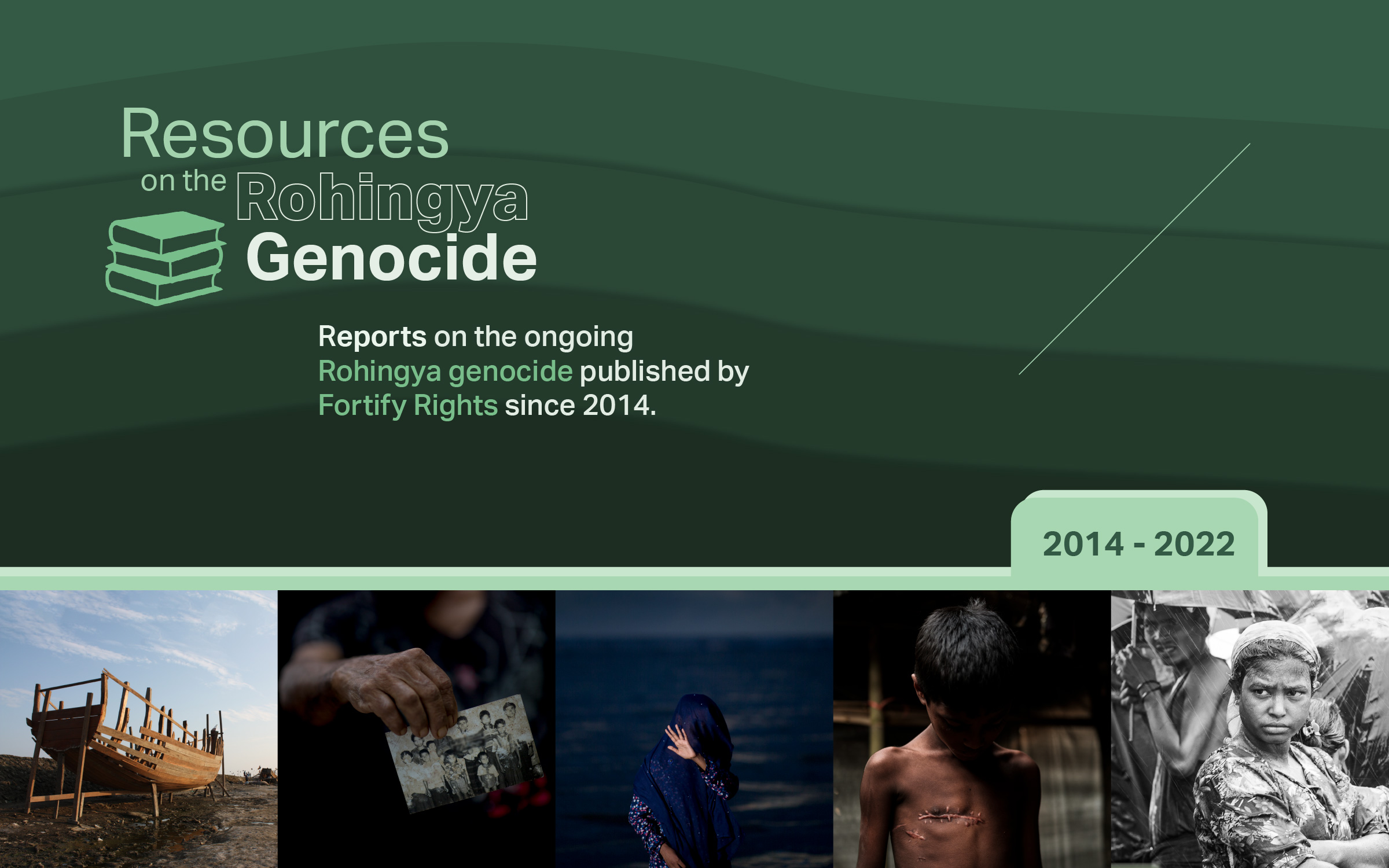 Since 2014, Fortify Rights has published evidence of genocide and other human rights abuses and atrocity crimes against the Rohingya in Myanmar and beyond. In multi-country investigations conducted over a period of more than seven years, our team gathered witness testimonies, leaked official Myanmar government and military documents, photographs, films, and other evidence of the genocide committed against Rohingya men, women, and children. Notably, Fortify Rights’ investigations also identified perpetrators in the Myanmar military and police who should be held accountable for their crimes.

Below is a compendium of reports on the Rohingya genocide. This body of work serves to remind the world of the atrocities that the Myanmar military committed and continues to commit against the Rohingya, and the continued violations faced by Rohingya refugees. Fortify Rights calls for the perpetrators of this genocide, namely the Myanmar military, to be held accountable for their international crimes and for full rights to be restored to Rohingya that would permit safe, dignified, and voluntary returns to their indigenous homelands in Myanmar.

Genocide by Attrition: The Role of Identity Documents in the Holocaust and the Genocides of Rwanda and Myanmar

This report provides comparative case studies of the Holocaust, the Rwandan genocide, and the ongoing Rohingya genocide in Myanmar, and the systematic use of identification documents as a tool of genocide. It reveals how successive Myanmar governments have carried out “genocide by attrition”—the gradual destruction of a protected group by reducing their strength through indirect methods of destruction.

Ending Impunity in Myanmar: Can the National Unity Government Delegate Jurisdiction to the International Criminal Court? A Legal Analysis

For decades, the Myanmar military and police have committed human rights violations that amount to war crimes, crimes against humanity, and genocide. The perpetrators of these crimes have enjoyed complete impunity. This report finds that the National Unity Government of Myanmar can delegate jurisdiction to the International Criminal Court in The Hague to investigate and possibly prosecute mass-atrocity crimes in Myanmar dating back to 2002 and into the future. Such a move has the potential to deter future atrocities and significantly alter Myanmar’s path to justice and accountability.

“The Torture in My Mind”: The Right to Mental Health for Rohingya Survivors of Genocide in Myanmar and Bangladesh

Rohingya refugees in Bangladesh continue to experience severe mental health impacts of genocide and mass atrocity crimes perpetrated in Myanmar, adversely impacting their daily lives and functioning long after physical wounds have healed. This report is based on participatory action research conducted between March 2018 to November 2020 by a team of ten ethnic-Rohingya researchers trained and supported by Fortify Rights in Bangladesh. The report provides new evidence of the severe mental health toll that genocide, human rights violations, and violence has on survivors.  The quantitative methods used in the report ensure the results are representative of the entire Rohingya refugee population in Bangladesh.

“Tools of Genocide”: National Verification Cards and the Denial of Citizenship of Rohingya Muslims in Myanmar

Based on more than 600 interviews from 2014 to 2019, this report exposes how the Government of Myanmar tortured or otherwise forced or coerced Rohingya to accept National Verification Cards (NVCs) that effectively deny their right to nationality and contribute to the erasure of their ethnic identity.

“Sold Like Fish”: Crimes Against Humanity, Mass Graves, and Human Trafficking from Myanmar and Bangladesh to Malaysia from 2012 to 2015

From 2012 to 2015, an estimated 170,000, mostly Rohingya, fled Myanmar and Bangladesh by sea for Thailand and Malaysia, but many became victims of human trafficking. A human trafficking syndicate held Rohingya, including women and children, captive in deplorable conditions on ships at sea and in jungle camps on the Malaysia-Thailand border. This joint report by the national Human Rights Commission of Malaysia (SUHAKAM) and Fortify Rights finds that a transnational criminal syndicate committed crimes against humanity against trafficked Rohingya, including acts of murder, extermination, enslavement, forcible transfer, torture, and rape/sexual slavery. It provides detailed information that may still be used to finally ensure justice and accountability for crimes perpetrated against the untold numbers of Rohingya trafficking victims and survivors.

“They Gave Them Long Swords”: Preparations for Genocide and Crimes Against Humanity Against Rohingya Muslims in Rakhine State, Myanmar

The dominant narrative about what occurred in Myanmar’s northern Rakhine State in 2017 suggests that Rohingya militants attacked dozens of police outposts, instigating a spontaneous Myanmar Army-led crackdown against Rohingya civilians, forcing the displacement of hundreds of thousands to Bangladesh. This 160-page report documents how the Myanmar authorities committed mass killings, rape, and arson attacks against Rohingya in Maungdaw Township in October and November 2016. When the international community failed to effectively respond to these attacks, Myanmar authorities made preparations, detailed in this report, to commit another attack that extended throughout all three townships of northern Rakhine State—Maungdaw, Buthidaung, and Rathedaung.

“They Tried to Kill Us All”: Atrocity Crimes against Rohingya Muslims in Rakhine State, Myanmar

A Rohingya militant group’s attack on Myanmar security forces in 2017 triggered what the Myanmar military called the “clearance operations”—a term used to describe multi-agency efforts to combat and apprehend Rohingya militants. However, this joint report by Fortify Rights and the Simon-Skjodt Center at the U.S. Holocaust Memorial Museum reveals how the Myanmar Army, Air Force, Police Force, and armed civilians carried out an unprecedented, widespread, and systematic attack on Rohingya civilians throughout northern Rakhine State with brutal efficiency.

Everywhere is Trouble: A Briefing on the Situation of Rohingya Refugees from Myanmar in Thailand, Malaysia, and Indonesia

In May 2015, human trafficking syndicates abandoned boats of thousands of Rohingya refugees and Bangladeshi nationals coming from Myanmar’s Rakhine State and Bangladesh, leaving them adrift in the Andaman Sea. Instead of initiating search and rescue efforts, key Southeast Asian countries reinforced their borders and some intercepted and towed stranded boats farther out to sea, leading to an unknown loss of life at sea. This joint report with the Burmese Rohingya Organization U.K. offers a comprehensive analysis of the situation of Rohingya refugees in Thailand, Malaysia, and Indonesia, with detailed proposed solutions for regional govenrments.

“Persecution of the Rohingya Muslims”: Is Genocide Occurring in Myanmar’s Rakhine State? A Legal Analysis

This legal analysis by Fortify Rights and the Allard K. Lowenstein International Human Rights Clinic at Yale Law School considers whether attacks and persecution of the Rohingya Muslim population in Myanmar constitute genocide, as defined by the 1948 Convention on the Prevention and Punishment of the Crime of Genocide (the Genocide Convention). This publication was the first to apply the law of genocide to the situation of the Rohingya in Myanmar. It concludes that strong evidence exists to establish State responsibility for the crime of genocide, and it recommends the establishment of a U.N. Commission of Inquiry into widespread and systematic human rights violations in Myanmar’s Rakhine State, including into whether the crime of genocide has occurred.

This report is based on leaked official documents revealing explicit government policies that restrict the basic freedoms of Rohingya Muslims in Rakhine State. The documents detail restrictions on movement, marriage, childbirth, home repairs and construction of houses of worship, and other aspects of everyday life. Confidential enforcement guidelines empower security forces to use abusive methods to implement these “population control” measures.