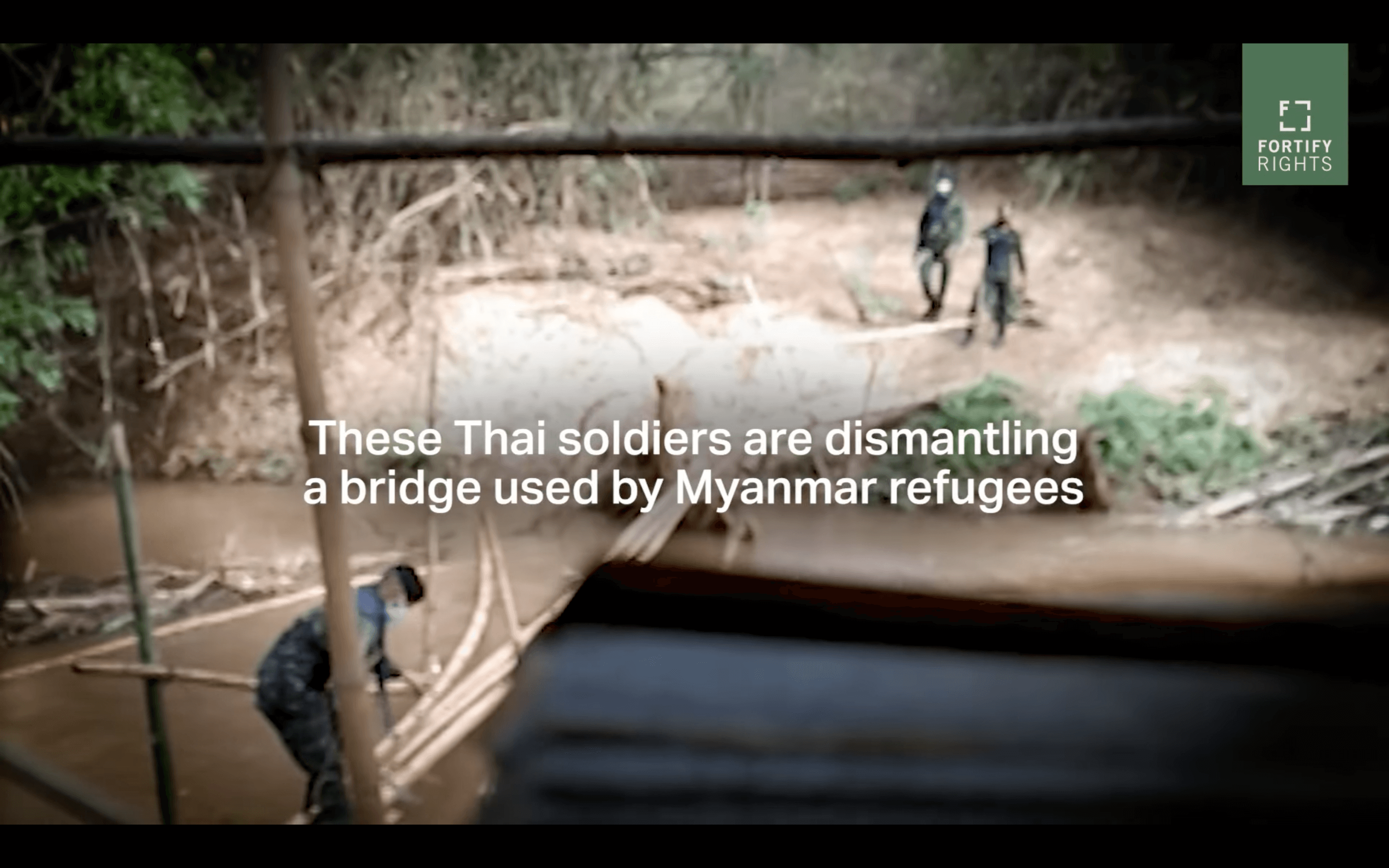 (BANGKOK, May 5, 2022)—On May 5, 2022, Rangsiman Rome a member of Thai parliament for the Move Forward Party, raised Fortify Rights’s documentation before the parliamentary Committee on Foreign Affairs. The documentation focused on the destruction by the Royal Thai Army of a cross-border bamboo footbridge used by refugees fleeing violence and persecution in Myanmar. The MP highlighted his intervention in a Facebook post on May 5, 2022 detailing the meeting. As a result of the MP’s questioning, the committee initiated an inquiry into the government’s handling of the refugee situation and invited Fortify Rights and relevant officials to share testimony.

On June 2, Fortify Rights testified before the committee along with the Royal Thai Army, National Security Council, and the Ministry of Foreign Affairs. The questioning and discussion focused predominantly on testimony Fortify Rights collected and documented in a news release and video published on May 3, 2022. Based on interviews with 15 Myanmar refugees on the Thailand-Myanmar border, including seven women, as well as three U.N. officials and four humanitarian aid workers in Thailand, the news release revealed violations of refugee rights by Thai authorities, including forced returns, arbitrary arrest and detention, and possible extortion. The video that accompanied the news release exposed how Thai soldiers actively prevented Myanmar refugees from reaching safety, including through the destruction of a footbridge.

The Thai media outlets, including Voice, Prachatai, The Matter, Thai PBS, and Thai Enquirer, covered the news release, and the video went viral on social media, receiving more than 386,000 views on Twitter and more than 10,000 retweets within a two-month period. Rangsiman Rome also posted Voice’s report on Twitter, which received retweeted over 10,000 times.

The day after Fortify Rights’s publication of the news release and video, the Royal Thai Army’s Third Army Region public relations unit released a statement claiming that soldiers destroyed the footbridge depicted in the film to prevent the transportation of “illicit objects” and that they did so in November 2021 rather than March 2022. In response, Fortify Rights issued a second news release on May 6 confirming the date of the incident and clarifying the use of the bridge by refugees and informal humanitarian workers bringing vital supplies to internally displaced people in Myanmar.

On June 2, 2022, after testifying before parliament, Fortify Rights met with Progressive Movement, a social movement aligned with the Move Forward Party, representatives to discuss in more detail the situation of Myanmar refugees in Thailand. As part of these discussions, the Progressive Movement agreed to visit the Thailand-Myanmar border to conduct their own assessment, continue to raise the issue of Myanmar refugees in Thailand in parliament, and host an event on World Refugee Day to raise awareness among the public.