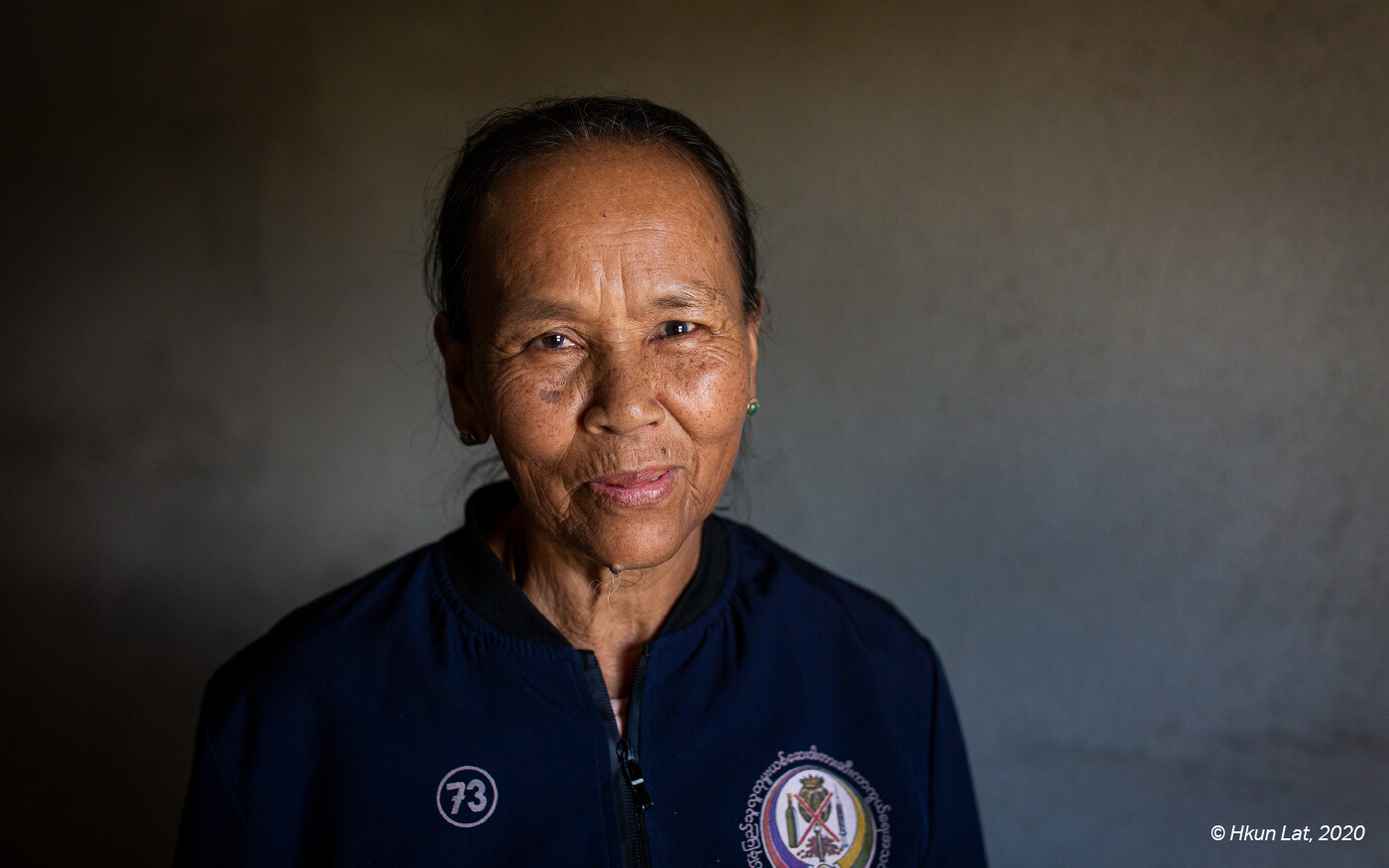 (YANGON, October 15, 2020)—Nine years after war reignited between the Myanmar Army and the Kachin Independence Army in 2011, more than 106,000 civilians remain forcibly displaced and fighting continues to affect local communities. For men, women, and children living in the conflict areas, landmines pose a particular threat.

“I just focus on my patients and survivors,” said Lamung Esther, a 68-year-old retired nurse. She is one of many frontline volunteers providing critical life-saving support to survivors of landmine explosions in the conflict areas of Kachin and Shan states.

Esther was born in the town of Taunggyi, the capital of Shan State, located more than 300 miles north of Yangon, Myanmar’s largest city. She remembers moving around the country as a young girl:

“My father was in the Myanmar military. We had to move around the country when I was growing up. After finishing high school in Taungoo [in Bago Region], I attended a nine-month training for nurse aides at Nam Kham [in Shan State] and worked there since 1969.”

In 1985, Esther’s family moved back to her parents’ hometown of Mung Baw in Muse Township, Shan State. She joined her parents there. “I felt that if I don’t move back to my land, it might be taken by Burmese people,” she said.

After moving back to her hometown, Esther joined a medical team formed by the Baptist church in Mung Baw to respond to the urgent medical needs of her community. These days, responding to landmine explosions is a significant part of her work.

“As soon as I hear about a landmine incident or when the hospital calls me, I will make sure that I go to the hospital as soon as I can. It depends on the situation, whether we have to transfer the injured person to Muse hospital or not. And since most staff from Mung Baw hospital cannot go there, I will be the one who takes care of the patient and brings them to another hospital.”

Having seen the devastating impacts of landmines on her community, Esther is not only working to support survivors but engages those involved in laying the mines:

“I’m trying to build a smooth relationship with both the Myanmar military and EAOs [ethnic armed organizations] in our area. So, when I see them planting landmines on the road or in the trees, I will ask them to remove it. I tell them that I understand they are targeting their enemies, but it’s not okay to plant them on the road where civilians pass . . . They didn’t say anything back to me, but they would remove all the mines because they understand that they are on the road or near the farm.”

War is not the only issue her community faces: the proliferation of drug abuse has caused problems in her community as well. Together with other local women, Esther formed a group to keep the community drug free.

“In our village, there is too much drug use and drugs abuse people. We started worrying that there will be no next generation because all the men were using drugs. So, we formed a group called Hkam Sha Hpung, which means “The Group Who Suffered.” It’s a group formed by mothers, wives, and sisters since 2012.”

When asked about her security, Esther told Fortify Rights that she has no fear: “I don’t think I’m scared, and I don’t even remember thinking about my own security.”

When asked about her hope for the future, she said:

“I hope that landmines will be cleared so that our area will be more peaceful. If the fight stops, we will have peace in our land again. But if it continues, civilians will be the ones who suffer. I wish it would stop.”