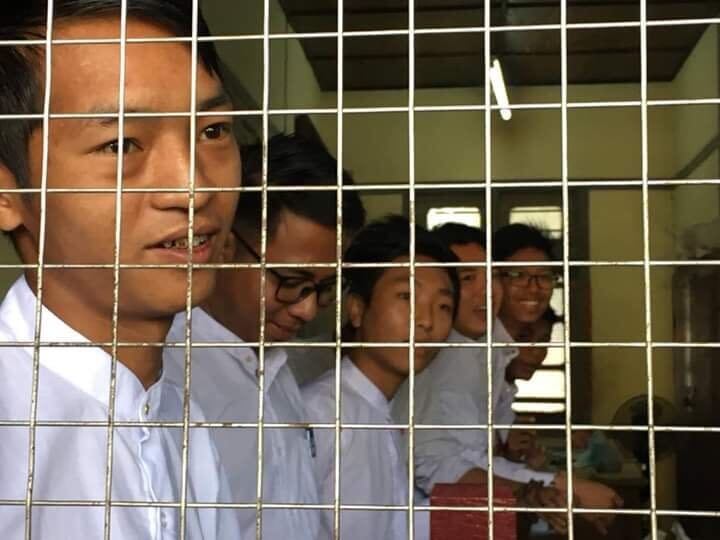 (YANGON, February 15, 2019) – The Government of Myanmar should immediately and unconditionally free seven university students sentenced to three months in prison with hard labor for peacefully protesting security conditions on their university campus in Mandalay, said Athan and Fortify Rights today.

“These convictions are absurd,” said Maung Saungkha, Founder of Athan. “This is yet another example of the Myanmar government jailing students and activists for exercising their right to peacefully assemble. Instead of locking up students for holding a protest, the government should listen to their calls for better security.”

On February 13, the Amarapura Township Court found seven students of Yadanabon University guilty of arson and holding a protest without providing proper notification, sentencing the students to a total of three months’ in prison with hard labor.

The seven students are prominent members of the Yadanabon Student Union and were involved in organizing a series of protests beginning on December 28 on Yadanabon University campus, calling for improved campus security.

The security conditions on the campus of Yadanabon University and in surrounding areas in Mandalay are troubling, said Athan and Fortify Rights. In the fall of 2018, three students—Ko Nay Min Htet, age 19, Htet Lin Thant, age 18, and So Moe Hein, age 20—were robbed and murdered in Mandalay, while up to 15 motorcycles of students are stolen each year, according to the protesters. Yadanabon University employs around 30 security officers to provide security for approximately 25,000 students.

Initially, the chief of police charged the students with criminal defamation, deterring a public servant from discharging their duty, arson, and abetting a crime—violations under sections 505(b), 353, 435, and 114 of the Myanmar Criminal Code, respectively—in addition to holding a protest without notifying township authorities in violation of the Peaceful Assembly and Peaceful Procession Law. However, Mandalay Regional Chief Minister Dr. Zaw Myint Maung agreed to drop the charges under sections 505(b) and 353 following negotiations with representatives from the Yadanabon Student Union on January 24.

Under international law, arrest and detention are unlawful when individuals are engaging in a protected activity, such as exercising their rights to freedom of peaceful assembly and freedom of expression. Moreover, the requirement under Myanmar’s peaceful assembly law that protest organizers obtain prior authorization for protests—rather than merely requiring that organizers notify authorities—is incompatible with international law and standards.

International law permits state authorities to restrict peaceful assembly or freedom of expression only if such restriction is considered “necessary in a democratic society in the interest of national security or public safety, public order (ordre publique), the protection of public health or morals or the protection of the rights and freedoms of others.”

The students’ protest in Mandalay was peaceful, lawful, and protected under international human rights law, said Athan and Fortify Rights.

“The students did the right thing and were acting responsibly by protesting for more security,” said Matthew Smith, CEO of Fortify Rights. “With these convictions, Myanmar authorities are sending a message to other would-be peaceful protesters and university students, and it’s the wrong message. The students should be unconditionally freed without delay.”