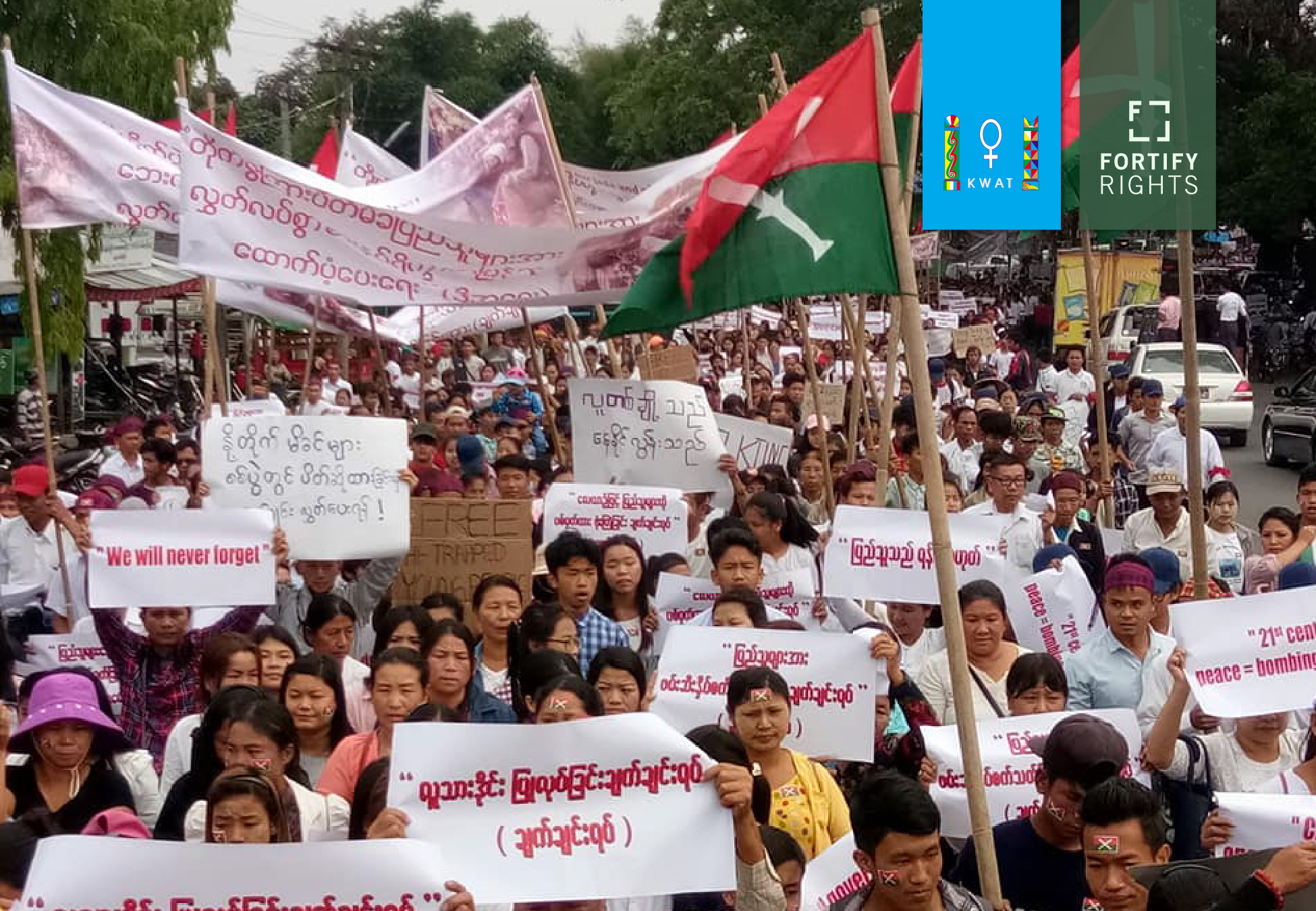 “It is not a crime to want the Myanmar military to end attacks on innocent people,” said Moon Nay Li, General Secretary of KWAT. “All these activists did was speak the truth, and they’re facing years in prison because of it.”

On May 8, Lieutenant Colonel Myo Min Oo from the Myanmar Army’s Northern Command filed criminal defamation complaints against Mr. Lum Zawng, 29, Ms. Nang Pu, 47, and Mr. Zau Jat, 41, for alleged statements made during a press conference and peaceful protest on April 30 and May 1 in Kachin State’s Myitkyina Township.

On April 30, Lum Zawng, a Kachin lawyer, helped organize a press conference and allegedly called for the evacuation of civilians trapped in conflict areas due to fighting between the Myanmar military and the Kachin Independence Army (KIA), an armed ethnic group.

On April 30 and May 1, more than 3,000 people attended a peaceful protest in Myitkyina Township that Lum Zawng, Nang Pu, and Zau Jat helped organize. During the protest, Nang Pu—a founding member of the Htoi Gender and Development Foundation, a Kachin community-based organization dedicated to women’s empowerment—allegedly accused the military of preventing the movement of civilians and killing civilians. During the protest, Zau Jat—the Chair of the Kachin National Social Development Foundation (KNSDF)—also allegedly accused the military of displacing 2,000 civilians from Hpakant Township and attacking civilians in the Hukawng valley and Tanai Township.

Defamation under the Myanmar Penal Code is defined as making an “imputation concerning any person intending to harm or knowing or having reason to believe that such imputation will harm the reputation of such person.” Under Section 500 of the Myanmar Penal Code, Lum Zawng, Nang Pu, and Zau Jat face up to two years in prison and/or a fine if convicted.

The Myanmar military recently convicted other Kachin human rights defenders for criminal defamation under the Myanmar Penal Code. For example, on June 13, 2017, Major Kyi Min Htun of Myanmar Army Light Infantry Division 101 filed a criminal defamation complaint against the General Secretary of the KNSDF Mr. Dashi Naw Lawn, 52, in the Hpakant Township Court. The complaint related to the distribution of pamphlets in Hpakant Township on June 9 alleging that the Myanmar military raped and killed Kachin women and destroyed villages and religious sites during the conflict.

In October 2017, Lashio District Court convicted Mr. Dumdaw Nawng Lat, 68, of criminal defamation for providing information about the Myanmar military’s alleged airstrikes in northern Shan State during a phone interview with Voice of America on December 1, 2016. He spent more than 15 months in prison before being released by presidential amnesty in April 2018.

The cases against Lum Zawng, Nang Pu, and Zau Jat violate the right to freedom of expression. The Myanmar authorities should urgently decriminalize defamation and drop the charges against these three activists and other human rights defenders, said KWAT and Fortify Rights.

“The Myanmar military is so sensitive to criticism that the mere mention of their crimes elicits prosecutions,” said Matthew Smith, Chief Executive Officer of Fortify Rights. “The military is trying to shut down any conversation that might better inform the public about atrocities in Kachin State, and they’re blocking efforts that would lead to accountability.”

Since the beginning of April, the United Nations Office for the Coordination of Humanitarian Affairs estimates that over 7,400 people have fled fighting between the Myanmar military and the KIA in Kachin State. Human rights violations and armed conflict forced the displacement of more than 100,000 Kachin civilians since June 2011. On May 16, KWAT published details of ongoing human rights violations by the Myanmar military in Hpakant, Tanai and Injangyang Townships, including the shelling and aerial bombing of civilian areas, and restrictions on humanitarian aid to displaced communities. Since 2011, Fortify Rights documented killings, systematic torture, human shielding, forced labor, arbitrary arrest, and other violations by Myanmar state security forces in Kachin and northern Shan states. Fortify Rights found that many of these violations constituted crimes against humanity and war crimes.

In March, Fortify Rights testified at a hearing organized by the International Development Committee (IDC) in the United Kingdom’s Parliament, detailing ongoing human rights violations against civilians in Kachin and northern Shan States. In February, the Myanmar Embassy in London failed to provide visas for a group of U.K. parliamentarians planning to visit Myanmar, following a report published by the IDC calling for the Myanmar military to be held accountable for atrocity crimes against the Rohingya Muslim population in Rakhine State.

The IDC is scheduled to publish their findings this week.

“The military have terrorized ethnic groups in Myanmar for generations. How much longer are we expected to tolerate it?” said Moon Nay Li. “The situation in Myanmar must be brought before the International Criminal Court, otherwise these atrocities are going to continue.”