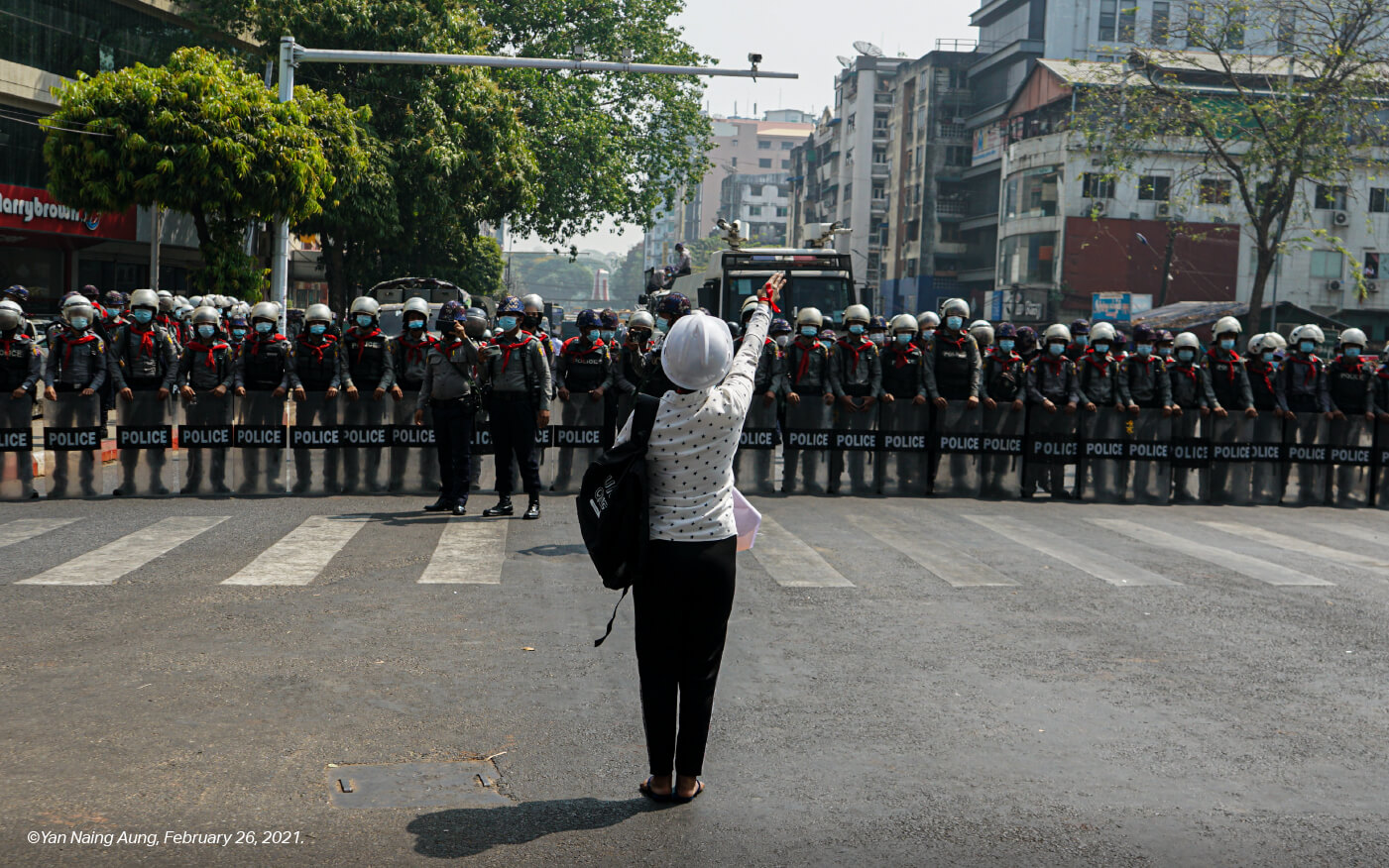 (BANGKOK, January 24, 2023)—Fortify Rights and 16 individual complainants from Myanmar filed a criminal complaint with the Federal Public Prosecutor General of Germany under the principle of universal jurisdiction against senior Myanmar military generals and others for genocide, war crimes, and crimes against humanity, Fortify Rights announced today.

The 215-page complaint and more than 1,000 pages of annexes provide evidence to assist the Office of the Federal Prosecutor to investigate and prosecute those responsible for the Rohingya genocide as well as atrocity crimes related to the military junta’s coup d’état launched on February 1, 2021.

February 1, 2023 marks the second anniversary of the deadly coup and crackdown in Myanmar, and August 2022 marked five years since the Myanmar military’s most egregious attacks on the Rohingya people. However, the individuals responsible for crimes related to both have yet to be held accountable.

“An ethnically diverse and united front of survivors from throughout Myanmar are bringing this case to seek justice and accountability,” said Matthew Smith, Chief Executive Officer and co-founder at Fortify Rights. “Despite international attention and several ongoing accountability initiatives, the Myanmar military still enjoys complete impunity, and that must end. These crimes cannot go unpunished. Germany’s universal jurisdiction law is a global model for combatting impunity for the worst crimes and providing access to justice for survivors of atrocities no matter where the crimes occur or where the survivors are located.”

Universal jurisdiction is a legal principle enabling a state to prosecute individuals responsible for mass atrocity crimes—genocide, crimes against humanity, and war crimes—regardless of where the crimes occurred or the nationality of the perpetrator or victims. Universal jurisdiction is typically reserved for “international crimes,” which are so severe that they represent offenses against the entire international community.

The criminal complaint was filed on January 20, 2023. Fortify Rights is represented by Covington & Burling LLP, which has offices in Germany.

Approximately half of the 16 individual complainants survived the Rohingya genocide and Myanmar military-led “clearance operations” in Rakhine State in 2016 and 2017, and approximately half survived post-coup atrocities in states and regions throughout the country in 2021 and 2022.

The complainants include six women and ten men who represent several ethnicities in Myanmar, including Arakanese (Rakhine), Burman, Chin, Karen, Karenni, Mon, and Rohingya. They include students, scholars, farmers, human rights defenders, businesspersons, former village heads, and homemakers. All the complainants survived or witnessed crimes in Myanmar, and many have since fled the country. At the time of writing, the complainants are located in several countries, including Myanmar, Bangladesh, India, Malaysia, Germany, and the U.S.

Two of the complainants—“M.K.” (not their real initials) and Nickey Diamond—are presently situated in Germany and have retained German legal counsel for matters related to the complaint announced today. They both experienced and witnessed crimes in Myanmar in 2017 and 2021, respectively.

“We trust in Germany to open an investigation and seek justice for genocide, crimes against humanity, and war crimes committed by the military and its leaders in Myanmar,” said Nickey Diamond, who is also a member of the Board of Directors at Fortify Rights. “This is the time to end impunity and ensure the military perpetrators and others no longer get away with their crimes.”

“F.K.” (not her real initials) is a 51-year-old Rohingya woman complainant who survived genocidal attacks in Rakhine State in 2017. In August 2017, soldiers and non-Rohingya residents of Rakhine State entered her village in northern Rakhine State, burned houses, and prevented residents of the village from fleeing. Individuals under the military’s control raped F.K.’s daughter-in-law while F.K. was in earshot and as soldiers beat her in an adjacent room. The Myanmar military killed seven members of her family in the attack on her village and, in a separate incident, cut her with a knife, leaving permanent scars. F.K. witnessed piles of dead bodies of Rohingya civilians in her village and military soldiers stabbing, beating, and killing numerous Rohingya men and children. Soldiers killed one child as he begged them for drinking water.

F.K. told Fortify Rights: “The Myanmar government and military have been trying to vanish our Rohingya community for 50 years. . . As a Rohingya woman, I want justice for the genocide so that it does not happen again. As a Rohingya complainant, I am ready to file the UJ [universal jurisdiction] case.”

The complaint announced today alleges that the Myanmar military systematically killed, raped, tortured, imprisoned, disappeared, persecuted, and committed other acts that amount to genocide, crimes against humanity, and war crimes in violation of the German Code of Crimes Against International Law. The complaint includes substantial evidence showing that senior military junta officials exercised superior responsibility over subordinates who committed crimes, knew about their subordinates’ crimes, and failed to take any action to prevent the crimes from happening and to punish the perpetrators.

The complaint is on file with the German authorities and is not publicly available.

In the complaint, Fortify Rights and the complainants request that the German Prosecutor open an investigation into specific military officials and others who, according to evidence, are liable for mass atrocity crimes. The complaint also requests that the German authorities open a “structural investigation” into the situation in Myanmar, which would uncover numerous other crimes in various locations and affecting other ethnic groups not otherwise covered by the complaint.

Thi Da, one of the complainants, is a 35-year-old ethnic-Chin woman and mother of three. In September 2021, the Myanmar military arbitrarily arrested and tortured her husband, Ngai Kung, 35. Following his arrest, Thi Da received no official information about her husband’s whereabouts and well-being, rendering it an enforced disappearance. Myanmar junta soldiers reportedly informed a group of pastors that her husband was killed. At the time of writing, Thi Da does not know what happened to him.

“I’m still angry with the [Myanmar junta] soldiers,” said Thi Da to Fortify Rights. “They don’t think of us as people and treat us like animals or objects.”

In addition to the complainants’ testimonies to the Prosecutor General, the complaint draws on more than 1,000 interviews with survivors of international crimes in Myanmar conducted by Fortify Rights since 2013 as well as leaked documents and information provided by Myanmar military and police deserters and others that shed light on the military’s operations, crimes, and command structures.

More than 1,000 pages of annexes accompany the complaint and include additional documentation of atrocity crimes in Myanmar that may be of service to the German authorities, including revelatory reports by Fortify Rights, U.N. Special Rapporteur on the situation of human rights in Myanmar Tom Andrews, the U.N. Independent International Fact-Finding Mission on Myanmar, and others.

An investigation and subsequent prosecution of these crimes under German law would serve to punish those who have committed the gravest of crimes, prevent future crimes by perpetrators in Myanmar, and signal to other would-be perpetrators in Myanmar and elsewhere that accountability for atrocity crimes cannot be avoided, said Fortify Rights.

An investigation and subsequent prosecutions in Germany of the atrocity crimes detailed in the complaint would not duplicate other international accountability efforts underway but would only add to the mounting evidence about the Myanmar military’s crimes, said Fortify Rights. Other efforts include an investigation by the International Criminal Court (ICC), a genocide case at the International Court of Justice (ICJ), and a universal jurisdiction case in Argentina for crimes related to the Rohingya genocide.

Specifically, in 2019, the ICC authorized an investigation into crimes perpetrated by Myanmar authorities against Rohingya where at least part of the crime was committed on the territory of Bangladesh or another State under ICC jurisdiction. At present, the ICC cannot investigate and prosecute any international crime completed entirely in Myanmar, and thus the investigation would not encompass the vast majority of the crimes against Rohingya alleged in the complaint.  The ICC is also not investigating crimes against humanity or war crimes that occurred in the aftermath of the February 2021 coup d’état.

In 2019, the Republic of The Gambia brought a case against Myanmar at the ICJ in The Hague, alleging Myanmar is responsible for genocide against the Rohingya people. While it is a critically important case, the ICJ proceeding concerns only State responsibility for Myanmar’s violation of its obligations under the Genocide Convention. The ICJ does not hold individuals criminally accountable, and no individuals will face repercussions through that court for crimes uncovered in that proceeding.

Also in 2019, Rohingya human rights defender Maung Tun Khin of the Burmese Rohingya Organization U.K. (BROUK) and six Rohingya women survivors filed a petition urging an Argentinian court to investigate, under universal jurisdiction, crimes committed with impunity against Rohingya in Myanmar. That judicial investigation is ongoing; however, while critically important, the case in the Argentinian courts currently focuses only on a specific region and does not address war crimes or the conduct surrounding the attacks against Rohingya in 2016 and 2017 or crimes against humanity in connection with the coup d’état. Moreover, unlike German law, Argentine law does not prescribe a punishment for the crime of genocide, so there is no applicable penalty for the offense. Rather, a perpetrator can be convicted in Argentina in the context of genocide but would be punished for “ordinary” crimes committed, such as homicide, rape, or unlawful detention. Maung Tun Khin and BROUK have agreed to cooperate with German authorities on the complaint submitted by Fortify Rights and others.

In 2019, Fortify Rights began exploring international legal options for survivors in Myanmar to pursue criminal prosecutions under universal jurisdiction. The organization researched and analyzed the feasibility of 16 jurisdictions in Europe, Africa, and South America that provide access to justice for atrocity crimes committed outside their national borders, ultimately deciding to file the complaint in Germany.

Under German law, the Prosecutor has the ultimate discretion to bring a case under universal jurisdiction. The Prosecutor should do so in particular when important witnesses to atrocities are present in Germany, which is the case regarding the complaint announced today.

German prosecutors are currently conducting more than 100 investigations into international crimes related to other countries and contexts. The Prosecutor General has also undertaken numerous structural investigations into atrocity crimes, which have led to several trials. German courts have heard cases dealing with torture in Syrian prisons as well as crimes by members of Da’esh, including against the Yazidi community.

In March 2022, the German Prosecutor opened a structural investigation into Russian war crimes in Ukraine.

In a statement to the United Nations on October 22, 2022, the Permanent Mission of Germany to the U.N. stated:

While we would prefer to have the most serious crimes under international law tried by international tribunals, in particular the ICC if the applicable complementarity criteria are met, the Code of Crimes against International Law allows us to work towards accountability for these crimes on a national level . . . The message is clear: those who commit atrocities cannot feel safe. They will eventually be held accountable. There is no safe haven for perpetrators of international crimes against criminal prosecution in Germany. Justice will be served for the victims and survivors.

Investigations by German authorities into international crimes can also potentially be used in prosecutions in venues and jurisdictions outside Germany.

“Germany is in a unique position to help thwart impunity in Myanmar,” said Matthew Smith. “Fortify Rights and the individual complainants are poised and ready to assist German prosecutors. An investigation now will help ensure that those responsible for these heinous crimes are held to account and punished, whether in Germany or elsewhere.”

Excerpts from select complainants’ statements to the German authorities: