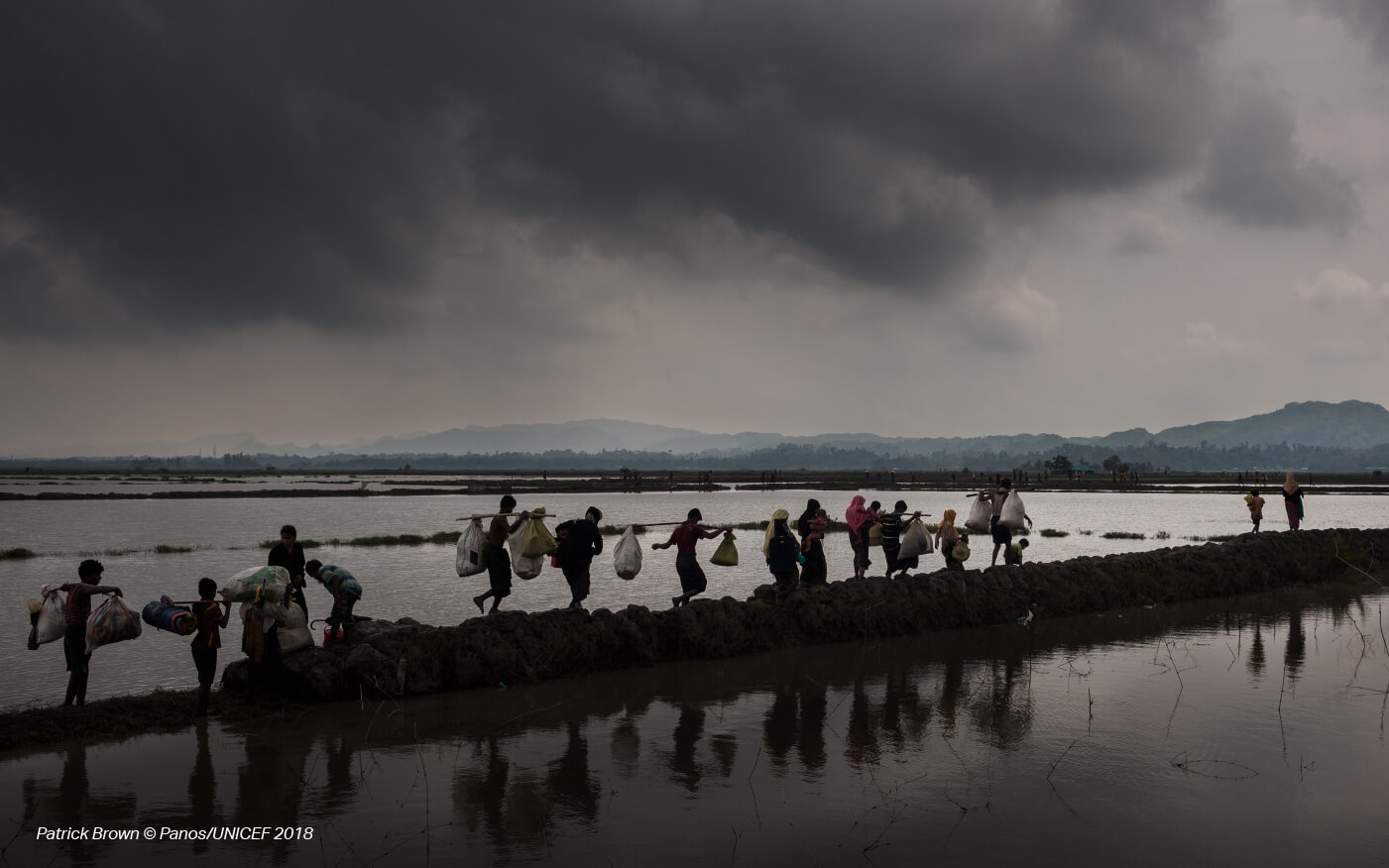 (COX’S BAZAR and BANGKOK, June 8, 2022)–The Myanmar military junta is using identity documents to facilitate the Rohingya genocide, mirroring tactics used in the Holocaust and Rwandan genocides, according to a new report released today by Fortify Rights. U.N. member states should deny the Myanmar junta access to weapons, finances, and political legitimacy, and the U.N. Security Council should immediately refer the situation in Myanmar to the International Criminal Court (ICC).

“Perpetrators have long used identification documents in the commission of genocide,” said Dr. Ken MacLean, co-author of the report, Senior Advisor to Fortify Rights and Clark University Professor at the Strassler Center for Holocaust and Genocide Studies. “Evidence from the Holocaust and Rwandan genocides show striking similarities with the ongoing erasure of the Rohingya identity in Myanmar by the junta.”

The 63-page report, Genocide by Attrition: The Role of Identity Documents in the Holocaust and the Genocides of Rwanda and Myanmar, reveals how the Myanmar junta is continuing to force Rohingya to obtain National Verification Cards (NVCs) that effectively strip Rohingya of access to full citizenship rights and protections. The report provides new information about the junta’s ongoing targeting of Rohingya and includes case studies from the Holocaust and Rwandan genocides to illustrate how authoritarian regimes instrumentalized identification documents to systematically identify, persecute, and kill targeted populations on a widespread and massive scale.

As demonstrated by the Holocaust and Rwandan contexts, the new report finds that identification cards contributed to “genocide by attrition” or the gradual destruction of a protected group by reducing their strength through sustained, indirect methods of destruction.

In Myanmar, a genocide by attrition has long been underway and it continues today, said Fortify Rights.

Drawing on historical research from past genocides, interviews with more than 20 Rohingya-genocide survivors, leaked Myanmar junta documents, and a post-coup media analysis of junta-backed news outlets, the new report finds that, like other genocides, the pernicious use of identity documentation plays a role in the ongoing genocide of the Rohingya in Myanmar and must be addressed.

Since the Myanmar military launched its coup d’état on February 1, 2021, soldiers led by Senior General Min Aung Hlaing have murdered and imprisoned thousands of people throughout the country while intensifying attacks on ethnic armed organizations and the People’s Defence Force—civilian-led militias organized to defend against the military’s attacks.

Amid these attacks, Rohingya in Myanmar’s Rakhine State told Fortify Rights how the junta continues using NVCs to prevent them from identifying as “Rohingya,” restrict their movement, and block livelihoods, creating conditions of life designed to be destructive.

“[The junta officials at immigration] insisted that I write ‘Bengali’ in an NVC application,” said a 26-year-old Rohingya woman who lost her husband, her home, and all her family identification documents during the 2016 military-led attacks on Rohingya in Rakhine State, leading her to apply for an NVC in October 2021. “So, I wrote ‘Bengali.’ They know I am a Rohingya, but they said we just know Bengali, no Rohingya.”

“They want to make us illegal immigrants and Bengali people as a strategy to exclude us from citizenship and ethnicity [in Myanmar],” a 19-year-old Rohingya man from Minbya Township in Rakhine State told Fortify Rights. “Accepting [an] NVC means you identify yourself as a ‘Bengali immigrant.’ We [Rohingya] don’t have any options. We need documents to travel to other cities, like Sittwe or other cities specifically for medical emergencies or business.”

Fortify Rights also documented the junta’s continued restrictions on freedom of movement for Rohingya, including through “Form-4”—a temporary travel permit, which is required for Rohingya in Rakhine State to travel between townships or, in rare cases, outside of Rakhine State. Rohingya must apply for Form-4 approvals, which are not always granted. For example, an internal administrative order issued by the junta-run General Administration Department of Buthidaung Township in Rakhine State on November 25, 2021, states, “Bengali people can only travel after obtaining legal permission (Form-4)” and breaching the order will result in “strong action being taken as per the existing law.”

The junta, like other genocidal regimes, claims such restrictions are necessary to protect “security and the rule of law.”

The United Nations Office on Genocide Prevention found that “increased politicization of identity” and discriminatory “measures or legislation” targeting protected groups serve as indicators in creating “an environment conducive to the commission of atrocity crimes.” Genocidal states often use legal and administrative tools to facilitate the destruction of a targeted group. This was the case during the Holocaust of the Jewish population and the Rwandan genocide of the Tutsi population.

For example, the Holocaust would not have been logistically feasible on such a rapid and massive scale without the initial definition and registration of Jews. The Nazis’ process of using official identification processes and documents enabled them to successively strip Jews of citizenship, expropriate their property, spatially restrict them to ghettos and camps, and then commit mass murder.

Similarly, identity documentation and verification also contributed to the Rwandan genocide. In some cases, Hutu perpetrators relied on the Rwandan national identification card that included the holder’s ethnic identity to target Tutsis and carry out their killings. For example, Hutu militias constructed barricades in urban areas and demanded travelers show their national identification cards, massacring Tutsi-identified cardholders as well as all those without documents.

The continuing use of the NVC in Myanmar poses a similar threat to Rohingya.

“Rohingya continue to face existential threats under the military junta, an illegitimate regime responsible for far-reaching atrocities,” said John Quinley, Senior Human Rights Specialist at Fortify Rights and co-author of the report. “The ongoing denial of Rohingya ethnicity and citizenship are indicators of genocide. The National Unity Government has committed to ensuring Rohingya citizenship and inclusion. The junta, however, is still using coercive measures to force Rohingya to identify as foreigners, erasing records of their existence.”

Over several years, the connection between identification documents and international crimes has been well-recognized. Yet, even amid genocidal attacks against Rohingya, some U.N. officials, embassies, and others in Myanmar not only failed to condemn the use of NVCs in targeting Rohingya but, in some cases, explicitly endorsed NVCs as a pragmatic solution to Rohingya “statelessness.”

Tolerance for discriminatory laws, policies, and practices affecting Rohingya, including the NVC process, is waning, however. Notably, on June 3, 2021, the National Unity Government (NUG)—the government established in April 2021 by elected parliamentarians who evaded arrest following the coup—announced its commitment to “abolishing” the NVC process, describing the NVC as “a process that the military has used against the Rohingya and other ethnic groups coercively and with human rights violations.”

The violations documented in Genocide by Attrition demonstrate links between the NVC process and genocidal acts and should be a focus of ongoing investigations and legal proceedings, said Fortify Rights.

Genocide is defined as an act or acts committed with the intent to destroy, in whole or in part, a national, ethnical, racial, or religious group. Under Article 2 of the 1948 Convention on the Prevention and Punishment of the Crime of Genocide, three of the five qualifying “acts” of genocide are directly relevant to “genocide by attrition” and are especially relevant in the context of the ongoing genocide of Rohingya in Myanmar. These enumerated crimes include: “(b) Causing serious bodily or mental harm to members of the group; (c) Deliberately inflicting on the group conditions of life calculated to bring about its physical destruction in whole or in part; [and] (d) Imposing measures intended to prevent births within the group.”

Dating back to 2015, Fortify Rights has comprehensively documented the military-led genocide against the Rohingya.

A 2015 report by Fortify Rights and the Allard K. Lowenstein International Human Rights Clinic at Yale Law School found sufficient evidence to establish the elements of the crime of genocide against Rohingya in Myanmar.

Following the 2016 and 2017 Myanmar military-led attacks on Rohingya civilians, Fortify Rights and the U.S. Holocaust Memorial Museum published a joint report documenting how Myanmar state security forces and civilian perpetrators committed mass killings in dozens of villages in Maungdaw Township in the first wave of violence in 2016 and in villages throughout all three townships of northern Rakhine State after August 25, 2017.

In a 160-page report in 2018, Fortify Rights exposed how the Myanmar military and civilian perpetrators made extensive and systematic preparations for genocidal attacks against Rohingya civilians in 2017, providing new details on massacres of Rohingya, systematic rape of women and girls, and the razing of hundreds of Rohingya villages in northern Rakhine State in the span of weeks.

A 102-page report by Fortify Rights in 2019 exposed how Myanmar authorities, including the military, forced or coerced Rohingya to accept NVCs as part of a systematic campaign to erase the Rohingya identity.

“The Myanmar military junta poses an undeniable threat to international peace and security,” said John Quinley. “U.N. member states must wake up and act now to deny the junta the resources it craves and to hold it accountable for all of its crimes including genocide.”