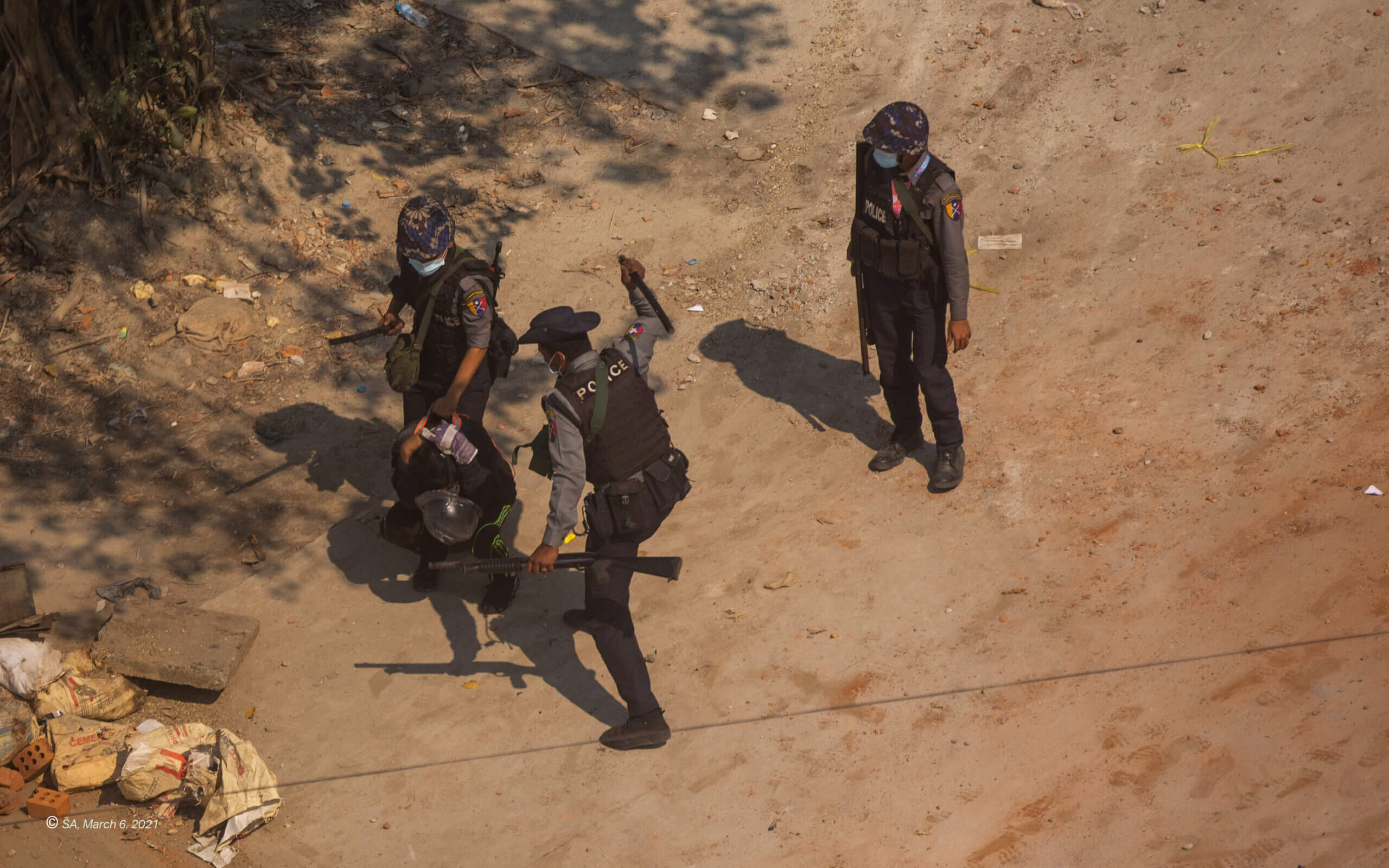 The report makes new contributions to accountability and international justice efforts targeting the junta’s atrocities since the coup, including by:

“Published just days prior to the one-year anniversary of the Armed Forces Day Massacre, this report provides the international community a better understanding of the junta’s crimes, the individuals responsible, and their battalions’ locations in relation to attacks. U.N. member states must ensure accountability for these ongoing atrocities,” said Tom Andrews, U.N. Special Rapporteur on the situation of human rights in Myanmar, Robina Senior Fellow at Yale Law School’s Schell Center, and author of the foreword to the report. “This pivotal report on the junta’s horrendous crimes can help guide efforts to ensure accountability.”

The 193-page report, “Nowhere is Safe”: The Myanmar Junta’s Crimes Against Humanity Following the Coup d’État, is based on more than 120 testimonies, leaked documents and information, and in-depth legal analysis of new evidence. It focuses on the first six months after the military’s attempted coup on February 1, 2021.

For months and often in broad daylight, Myanmar Army soldiers and Myanmar Police Force officers shot and killed unarmed civilians in cities and towns throughout the country, among other atrocities. The report proves how the junta engaged in a premeditated, widespread, and systematic attack on the civilian population.

The report also provides previously unknown details of the junta’s chain of command during the crackdown, including coup-leader Senior General Min Aung Hlaing’s establishment of a “Special Command” in Naypyidaw. According to active-duty military personnel, the Special Command had sole authority to deploy and command troops in civilian-populated cities and townships where soldiers have not typically been operational. Without orders from the Special Command, no others in the chain-of-command had the authority to move troops into civilian-populated cities and townships in central Myanmar.

The report names the four senior generals who led the Special Command during the crackdown on peaceful protesters throughout the country.

“Nowhere is Safe” establishes the physical locations of 1,040 military units nationwide. These locations, published in an annex to the report, may help prosecutors and policymakers geo-locate alleged perpetrators vis-à-vis crime scenes throughout the country.

The report is based primarily on 128 interviews with survivors, eyewitnesses, protesters, medical professionals, members of armed resistances, and former military, police, and navy members located in 30 townships in 13 of the country’s 14 states and regions in addition to Naypyidaw Union Territory.

In preparing the report, Fortify Rights and the Schell Center also communicated with six active-duty military personnel, including a lieutenant-colonel commanding a battalion, three captains, and two majors.

Fortify Rights and the Schell Center also obtained leaked junta documents, including internal memos instructing forces to commit crimes. A “fieldcraft” manual for military soldiers, obtained in researching this report, makes no mention of the laws of war or human rights and, in one section, advises soldiers to “Make sure a bullet equates to an enemy killed.”

Of the 61 military and police officials identified in the report, only 20 have been sanctioned by at least one government, said Fortify Rights and the Schell Center.

“All individuals responsible for these crimes should be sanctioned and prosecuted,” said Matthew Smith, Chief Executive Officer at Fortify Rights and co-author of the report. “Governments should revamp and calibrate their foreign policies to support the people of Myanmar in ending the military’s attack. Governments should acknowledge the National Unity Government of Myanmar, end weapons transfers to the military, and create conditions to ensure international jurisdiction over these crimes.”

“They dragged away my brother and killed my sister,” recalled a 25-year-old woman who witnessed police in Mandalay storm into her home and shoot and kill her six-year-old sister who was sitting on her father’s lap. “We are now at a hideout place where it is supposed to be safe. Actually, nowhere is safe.”

Medical doctors treating victims of the junta’s attack in Myanmar described to Fortify Rights and the Schell Center how numerous victims were fatally shot in the head or chest with a single bullet, indicating consistent, deadly precision and intent to kill. Military deserters explained how the military deployed snipers to murder protesters as a matter of state policy and to instill fear among them.

Next week, March 27 is Armed Forces Day in Myanmar and marks the first anniversary of the military junta’s deadliest day during the first six months of its attack on the civilian population. On March 26, 2021, junta-run television broadcasted a nationwide warning to protesters, saying, “You should learn from the tragedy of earlier ugly deaths that you can be in danger of getting shot in the head and back.” The next day, Armed Forces Day, Myanmar Army soldiers and Myanmar Police Force officers murdered at least 140 people nationwide. Eyewitness photographs and videos filmed on March 27 show dead bodies, including children, and soldiers firing weapons street-level, dragging lifeless victims away, and brutally beating people. One video shows Myanmar Army soldiers’ close-range killing of an unarmed boy on a motorcycle.

Fortify Rights and the Schell Center obtained and independently verified the authenticity of three leaked internal memos from the Myanmar Police Force—which is controlled by the military—ordering officers to arbitrarily arrest protesters, members of the National League for Democracy, and specific human rights defenders.

One memo ordered police to join with the military to “clear up and detain” protest organizers “in the strongholds of the protests.” Two other internal memos contained identical language instructing officers to arrest protest leaders and conduct night raids; the memos were issued on different dates and within at least two separate police stations, showing the systematic nature of the attack.

The Myanmar military and police are also responsible for widespread and systematic torture of civilians since the coup. The report includes firsthand testimony from survivors and eyewitnesses of torture and analyzes additional evidence, including video footage of torture.

Other violations documented in the report include enforced disappearance, persecution, and forcible transfer/deportation.

The report includes the most thorough examination to date of the junta’s crackdown under international criminal law. It finds that from February to July 2021, forces under the junta’s command committed the acts of murder, imprisonment, torture, enforced disappearance, persecution, deportation, and forcible transfer of population as part of a widespread and systematic attack directed against a civilian population with knowledge of the broader attack. The report thus establishes that there are reasonable grounds to believe that the junta committed crimes against humanity, meeting the standard required by the International Criminal Court (ICC) to issue an arrest warrant.

The legal analysis relies on standards articulated in the Rome Statute—the international treaty establishing the ICC—and international criminal tribunal precedent, including from the ICC and tribunals established to examine atrocity crimes in Rwanda, Yugoslavia, Cambodia, and others. Numerous lawyers contributed to the legal research and analysis led by the Schell Center, including a pro bono team from international law firm Sidley Austin LLP.

The report makes 28 recommendations to the Myanmar military, the U.N. Security Council, U.N. Member States, and others.

“The Myanmar military poses a threat to international peace and security,” said Roger Polack, Schell Center Visiting Human Rights Fellow and co-author of the report. “The Security Council must live up to its mandate to respond to such threats—and must discharge its responsibility to protect—by putting forward a resolution that imposes the recommendations in this report using its Chapter VII authority. Absent Security Council action, member states must work together to achieve the same. Without a concerted effort to stop ongoing atrocities and to hold the junta accountable for the crimes it has committed to date, the junta will undoubtedly continue to persecute its opponents, murder civilians, and devastate the social, health, and economic well-being of Myanmar.”