Myanmar: Ensure Accountability for Massacre and other Atrocities 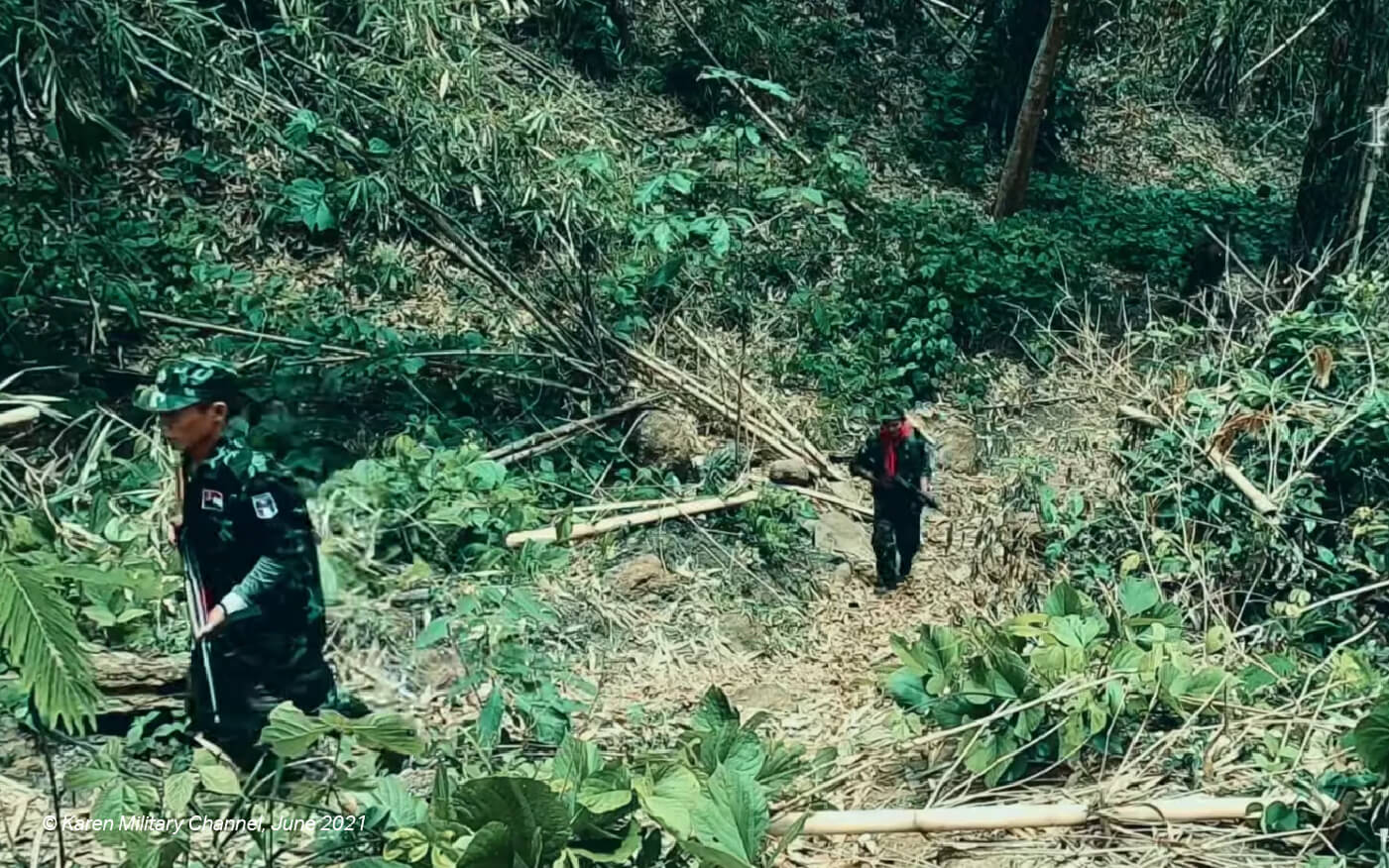 Gen. Ner Dah Bo Mya denied any wrongdoing, claimed the victims were Myanmar Army “spies” and said his soldiers “had to finish them up, otherwise they try to run away during the fighting and then they [would] come back, and it would be very bad for us.”

Senior leadership of the Karen National Union (KNU)—the political wing controlling the KNDO­—confirmed to Fortify Rights on August 11 that they would cooperate with international investigators and share evidence related to the KNDO massacre and other atrocity crimes, including Myanmar-Army-led atrocities. The KNU committed to provide evidence to international accountability mechanisms, which should include the United Nations-mandated Independent Investigative Mechanism for Myanmar (IIMM). The KNU is simultaneously conducting its own investigation of the extrajudicial killings committed by the KNDO.

KNU leadership told Fortify Rights this marks the first time they have agreed to cooperate directly with international investigators and international justice mechanisms.

“This was a massacre, and it should be investigated and prosecuted,” said Matthew Smith, Chief Executive Officer at Fortify Rights. “The KNU is setting an important example in transparency, cooperation, and commitment to share evidence of atrocities with international justice mechanisms.”

On May 31, the KNDO detained 47 people—31 men, six women, and ten children—in Kanele (also referred to as Ka Ne Lay or K’Neh Lay) village in Myawaddy Township, Karen State near the Thailand border. On June 1, the KNDO massacred 25 of the detainees—all men—and between June 1 and 9, released the rest, including six men and all 16 women and children.

On June 11 and 12, the Myanmar junta reportedly discovered the bodies of the 25 men, some of whom reportedly had their hands tied behind their backs. Junta-run media Global New Light of Myanmar claimed the victims were engineers and road workers.

During an English-language interview with Fortify Rights on July 12, KNDO commander Gen. Ner Dah Bo Mya said: “The people who were killed were Burmese military intelligence, and they are working on the road constructions [sic], and they [would get] all the information and pass over the information to their outpost leader near the construction.”

[B]efore the arrest, we sent our intelligence, and also we know about the whole situation of what they [were] trying to do. Mostly, military engineer teams are mostly military intelligence. They are not supposed to do military construction in Karen State, especially in close to our military base camp, and they have drones. They have the equipment. They were spying on us every night before the arrest took place.

When asked if the victims were armed, Gen. Ner Dah Bo Mya said: “No, they didn’t have weapons, but they [are] always connected to the military outpost in Kanele.”

Gen. Ner Dah Bo Mya confirmed that his soldiers asked him what they should do with the 25 men that they had detained. He told Fortify Rights that he instructed the soldiers: “‘Do what you can. Whatever you can do, you know, over there.’” He later added: “We just told them whatever is suitable that you think, because we are not in the area. Whatever is suitable, then whatever is appropriate. I think they did the right thing.”

It’s not normal to kill prisoners of war. We never kill prisoners of war—only the intelligence spy. The Burmese, also, when they arrest the intelligence and spies, they kill them right away . . . The same as the enemy, you know? When we capture them, we kill them. Even during the Second World War, when they capture spies, they kill them . . . Military spies, intelligence, and prisoners of war are totally different. You got to know about this stuff . . . And also, the incident happened during the fighting, not during the calm-like period. During the fighting, they were shelling at the same time. They were captured, but they would try to run away when the ground troops tried [to] move close to us. Twenty-five [men were killed]. They were buried, and then the Burmese took [them] out. The Burmese soldiers got into the area, [and] they took [them] out . . . They dug them out [of the graves].

Describing the tactics of his soldiers, Gen. Ner Dah Bo Mya told Fortify Rights: “They didn’t kill them brutally. They shot and killed [them]. [They did] not hit them with a stick or anything. This is something that happens in a war zone. You have to understand.”

On July 27, with Karen to English-language interpretation and, at times, directly in English, Lt. Saw Ba Wah told Fortify Rights:

Describing the killing in detail, Lt. Saw Ba Wah said: “We killed them in our farm or field and gathered them and left them in groups . . . [We did] not [kill them] one by one. We killed them all at the same time . . . We tied them. We tied them to their hands with rope.”

When asked by Fortify Rights who gave the order to kill the men, Lt. Saw Ba Wah said he received orders from the KNU:

I was in the headquarter office, and [the KNU] just told me: “You have to do it because you don’t have any other option. If you don’t [kill] them, then they will [kill] us, since [the Myanmar Army] are close to you. So, if you want, do it. There is no place and food to feed them.”

Lt. Saw Ba Wah said that he received orders from the “captain of intelligence” at the KNU “to do what we must do,” and he provided Fortify Rights with the official’s name. According to Lt. Saw Ba Wah, the KNU is investigating that person and his role in the massacre and has yet to suspend him from his duties. His name is on file with Fortify Rights.

In a public statement on June 16, the KNU committed to investigate the massacre, saying the KNU “follows the provisions of the Geneva Convention” and “will conduct an investigation to take action on this incident in accordance with KNU’s rules and regulations.”

Throughout the months of August and July, Fortify Rights engaged KNU representatives about the investigation and killing. On August 11, Fortify Rights spoke with senior KNU Central Executive Committee officials who confirmed the organization’s readiness to cooperate with international accountability mechanisms on this case, as well as on other atrocity crimes, including Myanmar-Army-led atrocities.

On July 16 and 30, Fortify Rights also spoke with the investigation commission of the KNU Central Executive Committee and on July 13 with a representative from the KNU’s foreign affairs office.

On July 30, a lead member of the investigation commission of the KNU Central Executive Committee told Fortify Rights in a communication that the KNU is investigating the killings, adding: the “committee’s goal is [to] try to investigate the truth about what really happened. And then, we’ll report to the leaders [of the KNU].”

Earlier, on June 30, a KNU representative spoke to Fortify Rights about the investigation, saying: “[W]e have a deep commitment to the [Geneva] Conventions. Even though [Myanmar military personnel] are our enemy, we should treat them as humans . . . We recognize and respect [international] humanitarian law.”

On July 22, in a statement, the Karen Human Rights Group—a Karen-led human rights organization—said it “strongly condemns this mass killing” and called on the KNU to conduct an “impartial investigation.” On the same day, the Legal Aid Network—an independent organization based in Kachin State, Myanmar—published a five-page briefing, calling on all stakeholders including KNDO to “ensure respect for, and comply with, the Geneva Convention.”

In June, junta-led media published the identities of those the KNDO had detained on May 31 in Kanele village. The list identified the names, ages, and home townships of the 25 victims of the massacre, aged 18 to 52, including also the six men and 16 women and children whom they released between June 1 and 9. Fortify Rights reviewed and translated the list into English.

Since the February 1 attempted coup, the Myanmar junta air force has bombed and strafed KNU-controlled towns and villages, displacing more than 100,000 civilians in Karen State, according to the U.N. refugee agency.

“There would be tremendous value in the KNU cooperating with international investigators to prosecute atrocities,” said Matthew Smith. “The KNU is in a position to help secure justice not only in the case of these recent killings but also regarding the Myanmar military’s crimes against Karen civilians over many years. We encouraged the KNU to do everything in its power to secure justice, and its leadership committed to do so.”

In September 2018, the U.N. Human Rights Council established the IIMM to “collect, consolidate, preserve and analyze evidence of the most serious international crimes and violations of international law committed in Myanmar since 2011.”

As Myanmar’s civil wars intensify, it is critical that all parties to the many armed conflicts are cognizant of their international legal obligations, said Fortify Rights.

Human rights law and the laws of war protect against the summary execution of spies and unarmed combatants in situations of wartime detention. Common Article 3 of the four 1949 Geneva Conventions, which applies in situations of non-international armed conflict and to state and non-state actors alike, protects “members of armed forces who have laid down their arms” and those no longer playing an active part in the hostilities by reason of injury, detention, or other cause. International law also prohibits torture, murder, and mutilation. Violations of Common Article 3 constitute war crimes and therefore incur individual criminal responsibility under international humanitarian law.

Moreover, under international law, those suspected of directly perpetrating war crimes, as well as their commanders and other superiors, can be held criminally responsible under various modes of liability.

According to the ICRC, the Rome Statute of the International Criminal Court is one of the principal sources to inform this customary international legal obligation. Article 28 (a) of the Rome Statute establishes criminal liability for “a military commander or person effectively acting as a military commander” when international crimes take place “by forces under his or her effective command and control” or “as a result of his or her failure to exercise control properly over such forces.” Further, a commander must have known or should have known about the crimes and “failed to take all necessary and reasonable measures within his or her power” to prevent, repress, or report the crimes for criminal liability to be established.

The acts described by Gen. Ner Dah Bo Mya and Lt. Saw Ba Wah amount to war crimes, said Fortify Rights. Individuals in the KNDO and KNU command structure implicated in these incidents should be identified, investigated, and prosecuted in line with international standards.

On June 17, the U.N. in Myanmar said in a statement in relation to murders by the KNDO that those responsible for human rights violations should be “held accountable, including the perpetrators and their chain of command.”

“The Myanmar military has perpetrated mass atrocity crimes for decades with impunity but that does not give any other party in the country the right to do the same,” said Matthew Smith. “Impunity must end wherever it rears its head.”