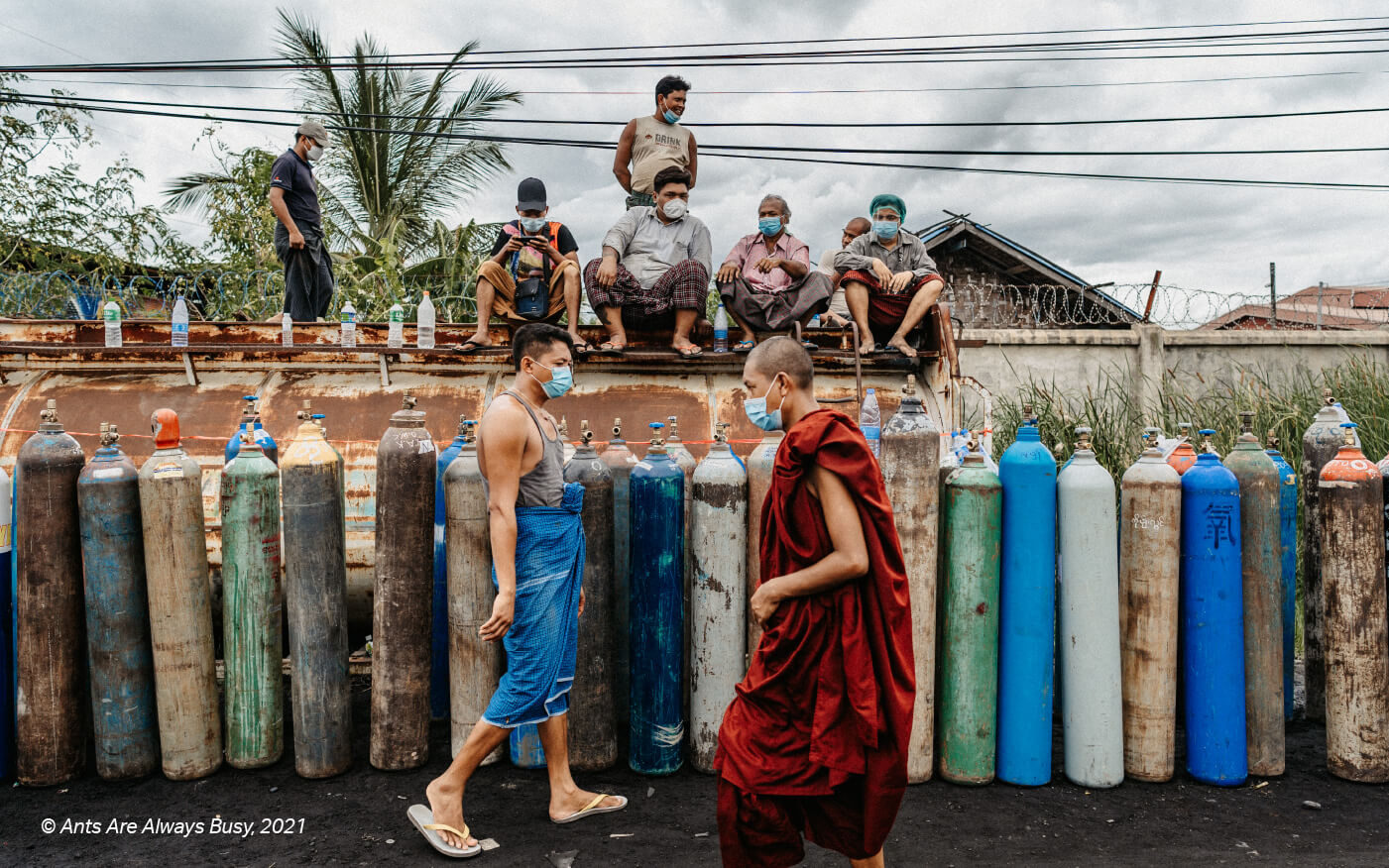 Deadly third wave of COVID-19 is sweeping the nation

“COVID is killing untold numbers of people throughout the country,” said Matthew Smith, Chief Executive Officer at Fortify Rights. “The junta is responsible for this crisis, which poses serious threats to the entire region and beyond. Senior General Min Aung Hlaing must step down and return the country to civilian rule before more lives are lost.”

Since the military seized power in an attempted coup d’état on February 1, its forces have arbitrarily arrested, beat, and killed medical professionals and destroyed medical supplies and facilities, leaving Myanmar’s healthcare system in disarray as COVID-19 spreads throughout the country.

Oxygen and medical supplies in Myanmar are scarce, hospitals and medical facilities are unable to treat a rising volume of patients, and bodies of those who have succumbed to the COVID-19 virus are reportedly piling up at morgues and crematoriums.

Fortify Rights documented the looting and destruction of medical supplies and equipment by junta security forces. For instance, a medical doctor described how Myanmar Army soldiers and police destroyed medical equipment at a clinic in Mandalay on two consecutive days in March: “They destroyed the blood pressure manometer, the sphygmomanometer, some of the oxygen measurement SpO2, and some medication they threw and some they took with them,” he said. “They robbed some of the medication.”

The World Health Organization (WHO) reports more than 260 attacks “on health care” in Myanmar since the coup, including attacks impacting medical facilities, patients, transport vehicles, medical personnel, and medical supplies. These attacks have severely limited COVID-19 testing, treatment, and vaccination.

Doctors and medical professionals in Myanmar founded the anti-coup Civil Disobedience Movement (CDM) on February 2, refusing to work under the military junta, making them a target of the junta and forcing many into hiding.

“The military is arresting every government service employee, especially the doctors,” an emergency physician who is now in hiding told Fortify Rights. “I did the CDM. So, they want me.”

According to the Assistance Association for Political Prisoners (AAPP), junta forces have arrested more than 5,315 men, women, and children, including 66 medical personnel since February 1. Another 571 medical professionals including doctors, nurses, and medics are reportedly evading arrest warrants and are in hiding, according to AAPP

Political prisoners are also among those dying from COVID-19. On July 20, veteran politician and spokesperson for the National League for Democracy Party, Nyan Win, 79, died from the virus, according to media reports citing his lawyer. Other political prisoners in Myanmar are also reportedly showing symptoms of COVID-19, including Myanmar nationals as well as Australian economist Sean Turnell and American journalist Danny Fenster, both of whom face trumped-up charges related to the coup.

Political prisoners nationwide in Myanmar are at grave risk due to COVID-19 and other ill-treatment by the junta, and they should be released immediately, Fortify Rights said.

According to the WHO, Myanmar has 240,570 confirmed cases of COVID-19 and 5,567 recorded deaths from the virus as of July 20. Fortify Rights believes the actual number of new infections and deaths from the disease are much higher than reported, based on communications with medical professionals and others in Myanmar.

The Acting WHO Representative to Myanmar told Fortify Rights that COVID-19 cases might be underreported due to limited testing capabilities, adding that efforts were underway to “re-operationalize testing and surveillance activities.”

“The test-positivity rate reported is as high as 35 percent as of July 12, 2021,” the Acting WHO Representative to Myanmar told Fortify Rights. “Because the data is limited, we cannot confirm how these figures reflect the real situation, but it reflects a rapidly increasing number of infections in the country.”

A test-positivity rate of five percent is considered dangerous and “too high,” according to faculty at the Johns Hopkins Bloomberg School of Public Health.

Due to a lack of healthcare workers, lifesaving materials, and safe access to hospitals and healthcare facilities, many COVID-19 patients in Myanmar are self-treating themselves at home.

“Although I am infected with COVID and feel some tightness of chest, [I] don’t have time to rest,” a Myanmar doctor-in-hiding and founding member of the CDM told Fortify Rights on July 19. He explained how he is treating home-based COVID patients by phone. “The situation is very bad here.”

On July 12, the junta’s Deputy Minister of Information, Major General Zaw Min Tun, admitted to placing restrictions on civilian access to much-needed oxygen supplies, telling journalists in Naypyidaw: “The reason we put these restrictions in place is, firstly, because we discovered scams on the internet. Some people are committing fraud, pretending to provide services refilling oxygen supplies, and we received complaint letters.”

Myanmar’s population exceeds 54 million. According to the junta-led Global New Light of Myanmar, an estimated 1.6 million people have been vaccinated to date.

A medical professional in Myanmar, unnamed here for security purposes, told Fortify Rights that some in the country, including himself, received a first vaccination shot before the coup. Due mainly to the junta’s ongoing attack against the people, he and others have not received a second shot, leaving them less protected from infection, to say nothing of the unvaccinated masses.

On July 20, the junta-led Global New Light of Myanmar reported that the Ministry of Health and Sports would vaccinate 50 percent of Myanmar’s population against COVID-19 this year.

On July 7, the U.N. Special Rapporteur on the situation of human rights in Myanmar, Tom Andrews, called for the formation of an “Emergency Coalition for the People of Myanmar” to stop what he described as the military junta’s “reign of terror” in the country. On July 14, Andrews reiterated his call for the formation of the coalition to coordinate urgent international help to address the “perfect storm” of factors fueling the COVID-19 crisis.

On July 18, the National Unity Government (NUG) of Myanmar—comprising elected members of parliament, leaders of anti-coup protests, and ethnic nationalities—requested the U.N. Secretary-General and the international community to urgently provide “humanitarian assistance and emergency support to the people of Myanmar” as the country grapples with a deadly third wave of COVID-19.

Under the International Covenant on Economic, Social and Cultural Rights (ICESCR), to which Myanmar is a State Party, the right to health requires States to ensure the “prevention, treatment and control of epidemic, endemic, occupational and other diseases” and to ensure “medical service and medical attention in the event of sickness.” The right to health also requires that health services, facilities, and goods are adequately available and accessible on a non-discriminatory basis.

Furthermore, the Committee on Economic, Social, and Cultural Rights clarified on November 27, 2020, that “States have a duty of international cooperation and assistance to ensure universal equitable access to [COVID-19] vaccines wherever needed.” Under the ICESCR, “States must strengthen their international cooperation to guarantee, as soon as possible, universal and equitable access to vaccines for COVD-19 globally, including for the populations of the least developed countries.”

“The junta has thwarted all basic factors necessary for an effective response to the COVID crisis, including access to hospitals, lifesaving materials, and sufficient healthcare staff to attend to patients,” said Matthew Smith. “The world is failing the people of Myanmar, and more lives will be lost if governments do not coordinate urgently.”