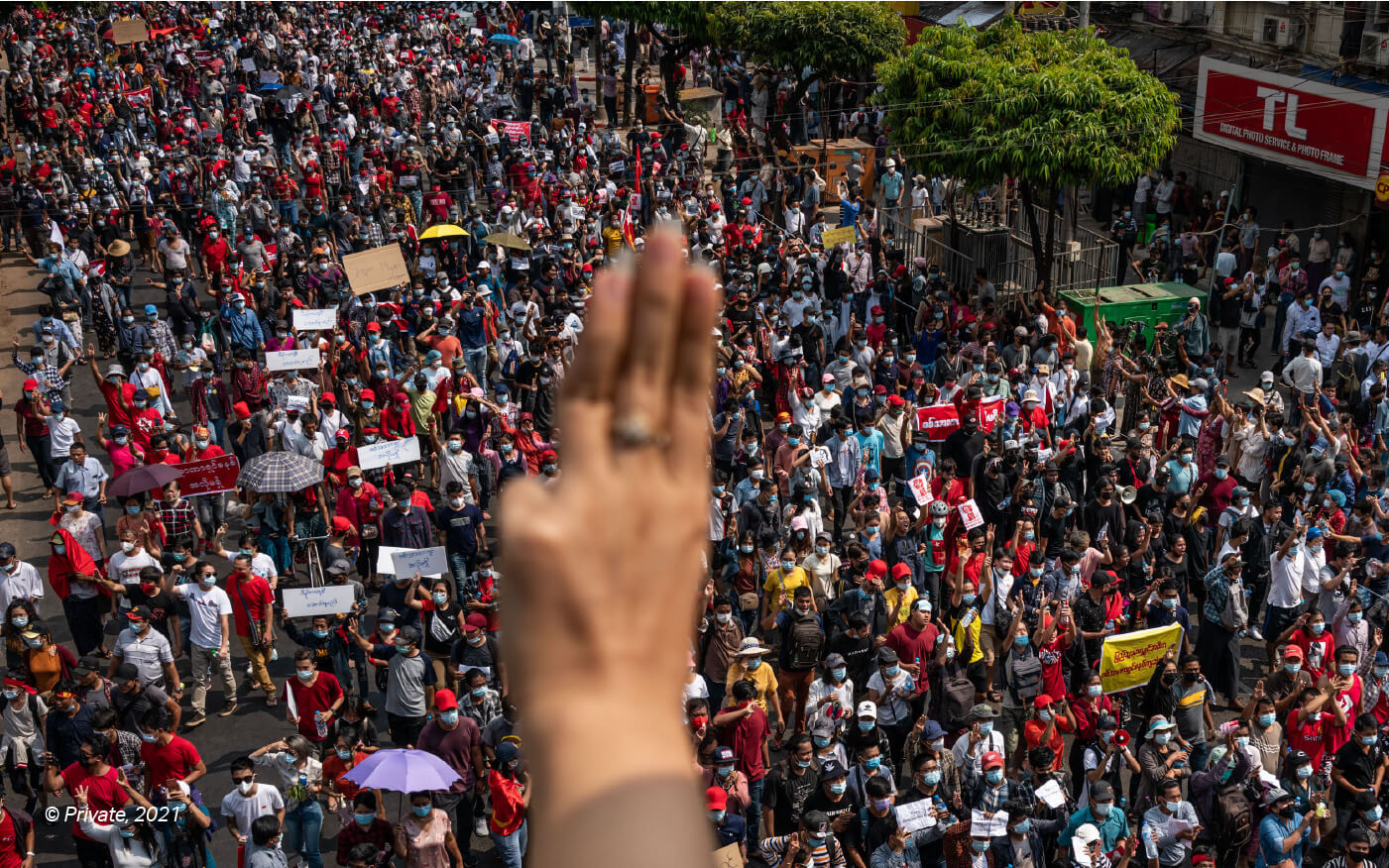 (BANGKOK, March 15, 2021)—U.N. member states should move to hold an Emergency Special Session at the U.N. General Assembly to demand collective action in response to the Myanmar military’s widespread and systematic attack on protesters, said Fortify Rights today. The Myanmar Police Force and Army reportedly killed more than 120 women, men, and children and arbitrarily arrested more than 2,000 since February 1.

Yesterday, security forces murdered more than 50 protesters, most in Yangon, according to local news outlets and open-source media. It was the deadliest day since the February 1 military coup d’etat.

“The Myanmar military poses a threat to the peace, and its ongoing attack is grave, dire, and massive in scope,” said Matthew Smith, Chief Executive Officer at Fortify Rights. “The people of Myanmar are desperate for action, and the U.N. Security Council has persistently failed them. Now is the time for an Emergency Special Session at the General Assembly, where China and Russia have no veto power.”

During an Emergency Special Session on the situation in Myanmar, U.N. member states should press for a global arms embargo against the Myanmar military and targeted sanctions against Myanmar military individuals, entities, and assets, said Fortify Rights. On sanctions, specifically, governments should coordinate to block the junta’s access to billion-dollar natural gas revenues. Member states should also press for the U.N. Security Council to refer the situation in Myanmar to the International Criminal Court to investigate atrocity crimes by Myanmar security forces in recent years, including genocide, war crimes, and crimes against humanity.

The U.N. Security Council has issued two statements in response to the situation in Myanmar since the coup, on February 4 and March 10, but failed to take any collective action or acknowledge the junta’s overthrow of the elected government as a coup d’état. The people of Myanmar and civil society organizations have consistently called for greater action from the international community in response to the coup and the junta’s attacks on civilians.

On March 10, the Security Council called on “the [Myanmar] military to exercise utmost restraint.” Since that statement, the junta murdered scores of people.

Under the Uniting for Peace Resolution, if the U.N. Security Council lacks “unanimity” and “fails to exercise its primary responsibility for the maintenance of international peace and security in any case where there appears to be a threat to the peace, breach of the peace, or act of aggression,” then the U.N. General Assembly can convene “to maintain or restore international peace and security.”

On February 1, the Myanmar military carried out a coup d’etat, overthrowing the democratically elected government. The military initially arrested State Counsellor Aung San Suu Kyi, President Win Myint, and hundreds of others, declaring that it would control the country for one year. On February 2, Senior General Min Aung Hlaing created the State Administrative Council, with himself as chairperson.

On February 5, 15 elected members of parliament created the Committee Representing the Pyidaungsu Hluttaw (CRPH), adding two additional MPs on February 10. The CRPH aims to form a government and perform the duties of the Pyidaungsu Hluttaw. On February 23, the CRPH appointed Dr. Sasa, an ethnic Chin medical doctor and longtime humanitarian, as its representative to the United Nations. On March 9, CRPH announced it had appointed Mahn Win Khaing Than as acting Vice President of the country.

Since February 1, millions of people in Myanmar have protested the coup, including through acts as simple as banging pots and pans. Hundreds of thousands of people have taken to the streets throughout the country, protesting the military and holding evening vigils for murdered protesters in defiance of the junta’s prohibition on gatherings of five or more people.

The Myanmar Police Force and military have used excessive and lethal force against protesters and, according to the Assistance Association for Political Prisoners, arbitrarily arrested at least 2,000 people. The junta amended a raft of laws to strip away rights and imposed evening internet blackouts nationwide.
The military coup stands to exacerbate existing crises in the country, said Fortify Rights, citing reports of recent Myanmar military troop movements in at least northern Rakhine State and Karen and Kachin states, armed clashes with non-state ethnic armies, and attacks on civilians in ethnic areas since February 1.

The Myanmar military is responsible for mass atrocities and protracted human rights violations committed with impunity against the Rohingya and the Arakanese (Rakhine), Kachin, Shan, Karen, and other ethnic minorities for decades. In its 2017 genocidal offensive against the Rohingya, the military massacred untold civilians and forced nearly 800,000 to flee to Bangladesh. Myanmar authorities continue to confine more than 125,000 Rohingya and other Muslims to more than 20 internment camps in five townships in Rakhine State.

On February 12, the U.N. Special Rapporteur on the situation of human rights in Myanmar, Thomas Andrews, said, “all options should be on the table” in response to the coup in Myanmar. “Barring concrete steps from the Security Council,” Thomas Andrews said, “the General Assembly can convene an Emergency Special Session.”

On March 11, Thomas Andrews addressed the U.N. Human Rights Council, describing “shocking video of the aftermath of attacks, including fatal gunshot wounds to the heads of protesters, and video of soldiers dragging or carrying away the dead bodies of their victims.”

“There is no question that the Myanmar military poses a threat to international peace and security, even beyond this coup,” said Matthew Smith. “This is the same military that has been carrying out the Rohingya genocide for several years and committing war crimes in ethnic states.”

Despite the Myanmar military’s long-standing threats to peace and security, the Security Council has never used its authority under Chapter VII of the U.N. Charter concerning Myanmar. Chapter VII allows the U.N. Security Council to “determine the existence of any threat to the peace, breach of the peace, or act of aggression” and to take military and nonmilitary action to “restore international peace and security.”

“The Myanmar military is not the Government of Myanmar,” said Matthew Smith. “U.N. member states must recognize Myanmar’s duly elected leaders and their chosen representatives, including the CRPH. The junta is an illegal entity formed by the Myanmar military, a criminal enterprise.”