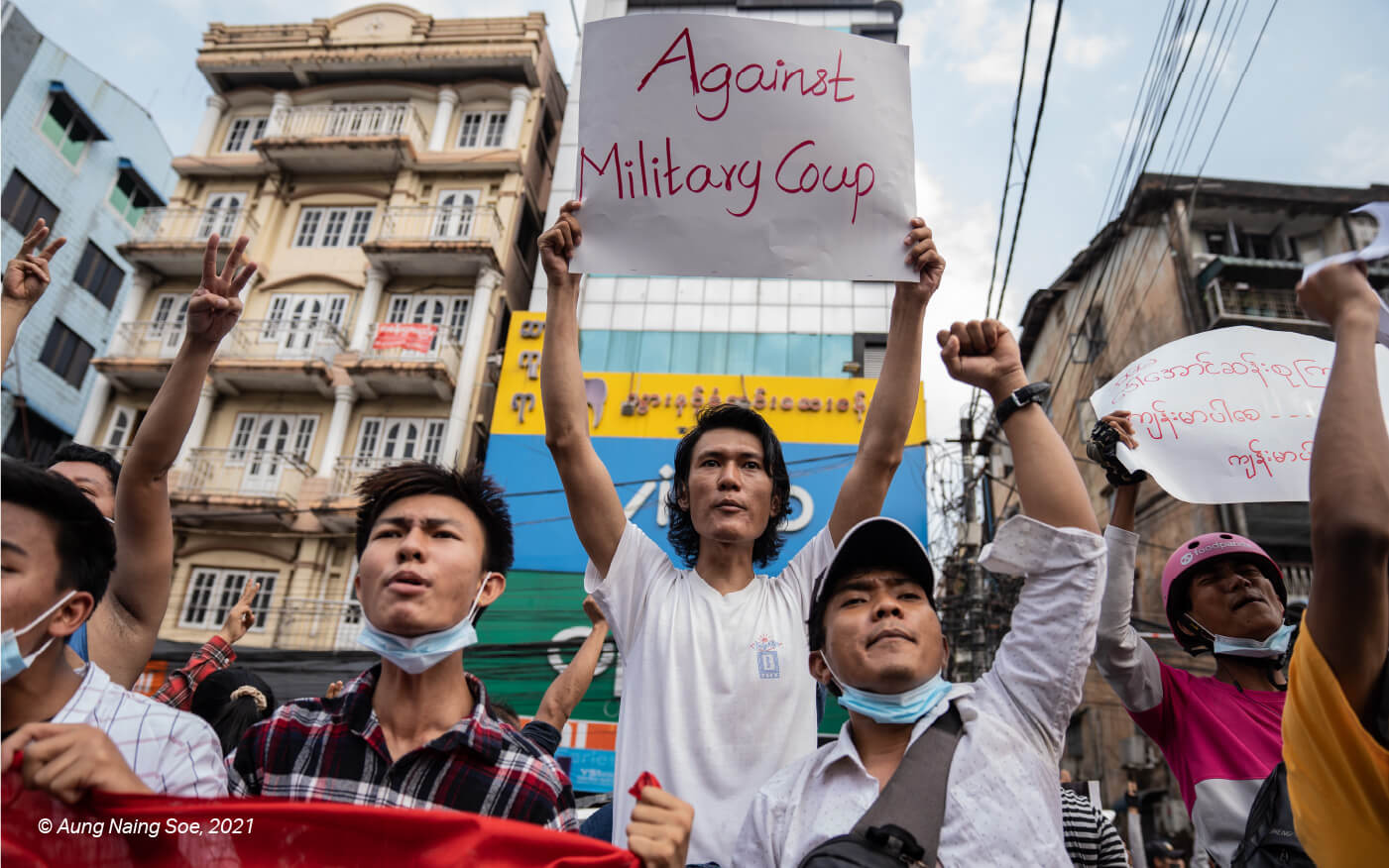 “In times of crisis like these, media freedom is especially necessary,” said Ismail Wolff, Regional Director of Fortify Rights. “The junta evidently feels threatened by the truth. Its repressive measures targeting a free and independent media cannot stand.”

On February 14, the military detained overnight five Myanmar journalists covering a crackdown by security forces during a protest in Myitkyina, Kachin State.

“We were kept in a prison transport vehicle . . . We were detained at 8:45 p.m. and let go the next day at around 10:30 a.m.,” one of the journalists told Fortify Rights the day after the military released him. “[When released], the soldiers explained that we were detained because we disclosed information about the crackdown and how many military and police were there.”

According to one of the journalists who spoke to Fortify Rights, soldiers released all five without charge and forced them to sign a document saying they would not violate the junta’s ban on gatherings of five or more people or the nighttime curfew issued on February 8. The authorities also confiscated the journalists’ cameras and returned them upon release.

State security forces detained at least four other journalists since the February 1 coup, according to the Assistance Association for Political Prisoners (AAPP). The junta reportedly released all the journalists except freelance journalist Shwe Yi Win, who police allegedly arrested on February 11 in Pathein, the capital city of Ayeyarwady Region. Her mother told the Irrawaddy Burmese on February 12 that two women police officers took her daughter, and she has no information on her whereabouts. As of February 18, she remains in detention according to the AAPP.

The junta’s arrests and detentions of journalists have created a fearsome chilling effect on working journalists, said Fortify Rights. Fortify Rights documented how several members of the press in Yangon Region, Rakhine State, and Kachin State went into hiding or avoided staying at their homes out of fear since the February 1 coup.

“I am not staying at home,” one journalist told Fortify Rights, name withheld for security. “I have not slept at home for two weeks, since February 2. Last night, police came to the neighborhood where I’m hiding. They didn’t come where I was [staying], but I could see them in the streets.”

“Ten of our staff are now in hiding, including editors and reporters,” an editor-in-chief of a Myanmar media organization told Fortify Rights. “The military government should not try to stop journalists from doing our jobs. Reporting the current situation is our job. It is our duty.”

Another journalist told Fortify Rights that members of his newsroom do not sleep at home out of fear of arrest: “We are afraid that the military intelligence will come and get us at night.”

On February 12, Tom Andrews, the United Nations Special Rapporteur on the situation of human rights in Myanmar, addressed the U.N. Human Rights Council’s emergency session on Myanmar, raising concerns about media freedom in the country, saying: “Police beat at least one journalist, others are reporting being harassed and targeted by plain-clothed police. Some have gone into hiding.”

On February 16, the military junta’s executive body, the State Administrative Council (SAC), held its first press conference. Deputy Minister for Information Zaw Min Tun reportedly spoke to media, saying the military is taking “necessary measures according to the law if media reports violate the law.” He continued to tell the press conference, “I can’t promise not to take any action against the media.”

Prior to the coup, the military as well as the National League for Democracy (NLD)-led government were responsible for unlawful restrictions on freedom of expression and media freedoms. For instance, on January 22, members of the Myanmar military filed criminal defamation complaints against two journalists for publishing a story alleging the military confiscated rice and used forced labor in Rakhine State.

Since February 1, the military junta also dictated a raft of proposed legislation that would severely restrict fundamental rights, including press freedoms. On February 9, the SAC sent a draft cyber security law to telecommunications operators, requesting input by February 15. If enacted, the bill, on file with Fortify Rights, would effectively criminalize criticism of the junta, with penalties of up to 10 million Myanmar Kyat (US$7,000) and/or up to three years in prison for each offense.

Section 64 of the draft cyber security law criminalizes “creating misinformation and disinformation with the intent of causing public panic, loss of trust or social division on a cyber space.” Section 29 prohibits “written or verbal statement[s] against any existing law,” and Section 70 prohibits attempts to encrypt or otherwise disguise the source of online information or data. These vague and sweeping provisions pose unnecessary and disproportionate restrictions on the right to freedom of expression.

“Min Aung Hlaing seems intent on dialing back any gains made over the past decade in terms of freedom of expression and access to information,” said Ismail Wolff. “These are blatant, blunt tools of censorship and fear-mongering.”

On February 15, Telenor Group, one of two wholly foreign-owned telecommunications providers in Myanmar, released a statement saying that it “strongly object[s] to the passing of the bill” without key concerns being addressed first. These included ensuring “due consideration to fundamental human rights such as freedom of speech and expression in Myanmar and personal privacy and security concerns to people in Myanmar.” The company also said that passing the proposed bill “during a state of emergency and granting such broad powers to a temporary administration is not appropriate.” The company called for the draft law to be debated in Parliament to ensure it is properly scrutinized and “fit for purpose and in line with the Constitution of Myanmar.”

The military junta should urgently withdraw its plans to enact the bill and protect the right to free expression in Myanmar, said Fortify Rights.

Furthermore, on February 11, the Myanmar Ministry of Information sent a letter to the Myanmar Press Council–an independent media body–ordering media to cease “falsely” referring to the junta as a “coup government” and said doing so violates the country’s News Media Law and Printing and Publishing Law.

“It’s a bad policy,” a Myanmar journalist-in-hiding told Fortify Rights on February 13. “It’s a violation against the press. We have to write the truth and say [the military] took power from the people.”

Under international human rights law, restrictions on the rights to freedom of expression and peaceful assembly are permissible only when provided by law, proportional, and necessary to accomplish a legitimate aim. In General Comment No. 37 on the right to peaceful assembly, the U.N. Human Rights Committee acknowledged the particular importance of the role of journalists and human rights defenders in monitoring and reporting on assemblies, stating that “[t]hey must not face reprisals or other harassment, and their equipment must not be confiscated or damaged.”

International human rights law also protects the right to liberty and protection from arbitrary arrest or detention. An arrest or detention as punishment for the legitimate exercise of a protected right, such as engaging in the right to freedom of expression or peaceful assembly, is considered arbitrary and in contravention of international human rights law.

“The international community must acknowledge that the military junta is not a legitimate government and has no authority to pass or amend legislation,” said Ismail Wolff. “Governments should impose targeted sanctions against the architects of this coup.”