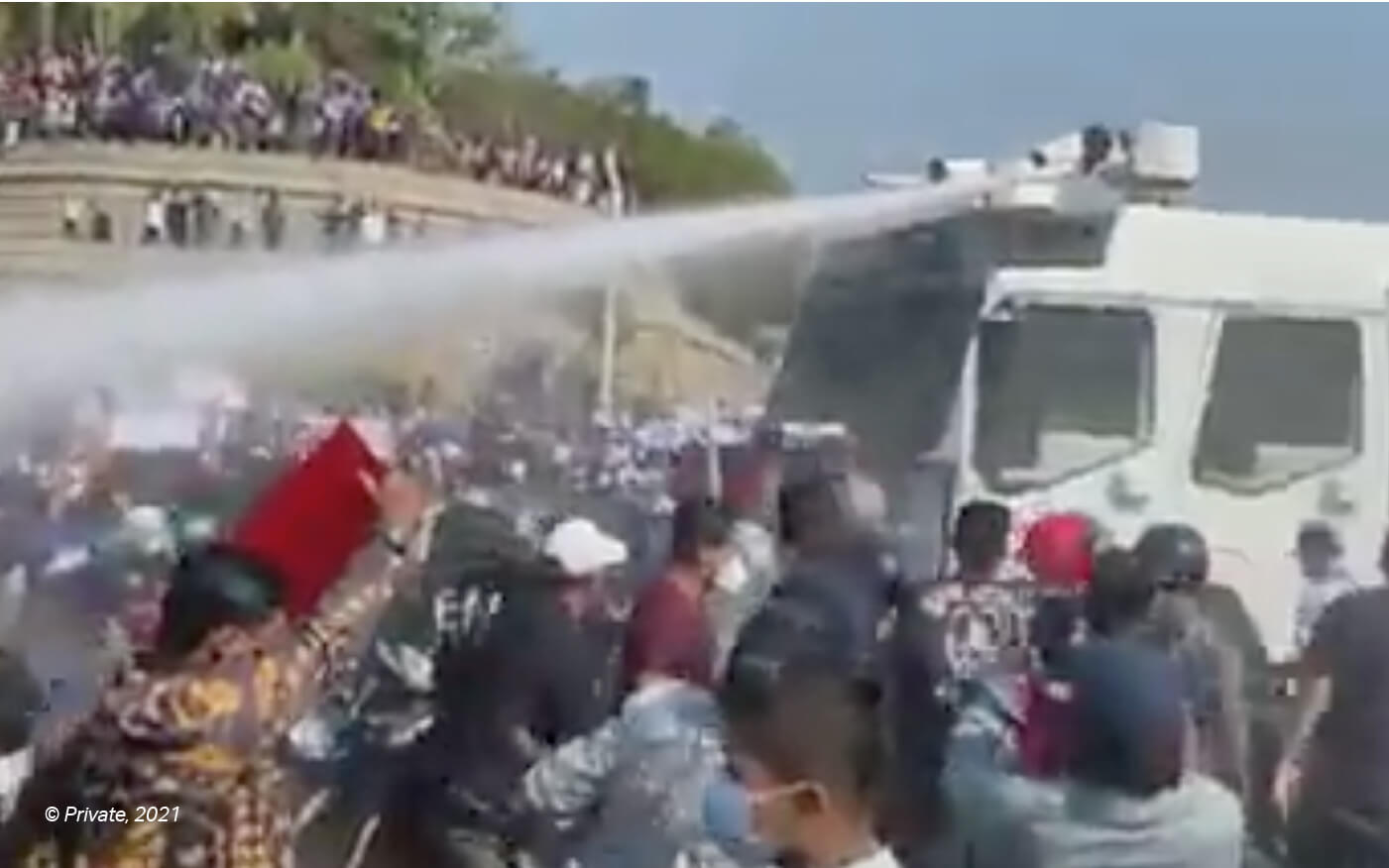 Police shot 19-year-old woman in the head, injured others

(YANGON, February 10, 2021)—The Myanmar military and police should immediately end any use of excessive force against peaceful protesters and ensure the right to peaceful assembly, said Fortify Rights today. Myanmar police shot 19-year-old Mya Thwate Thwate Khaing in the head with live ammunition in Naypyidaw yesterday, critically injuring her.

“This violent crackdown must end now,” said Matthew Smith, Chief Executive Officer of Fortify Rights. “The people of Myanmar are exercising their rights, and the military junta should heed their calls and immediately reverse this coup.”

Tens of thousands of people took to the streets in more than 300 towns and cities throughout Myanmar yesterday, protesting a military coup d’état on February 1 that overthrew the elected civilian government. Yesterday was the fourth consecutive day of widespread street protests.

Police in Naypyidaw shot 19-year-old student Mya Thwate Thwate Khaing, also referred to as Mya Thwe Thwe Khine and Myat Thet Thet Khaing, in the head while she positioned herself with other protesters.

Mobile-phone footage of the incident shows police firing weapons in the direction of protesters, and a gunshot rings out as Mya Thwate Thwate Khaing drops to the ground. She was taken to a hospital in Naypyidaw where a doctor confirmed to Fortify Rights that she sustained an imminently fatal gunshot wound to the head with live ammunition. A doctor on the scene told Fortify Rights she was brain dead. Brain death is the complete loss of brain function and in some jurisdictions is regarded as legal death.

In Naypyidaw, Bago, Magway, and Mandalay, police fired weapons, including handguns, into the air and used high-pressure water cannons against peaceful protesters.

In Mandalay, police arrested dozens of protesters, including at least two boys, aged 16 and 17. Video footage analyzed by Fortify Rights shows police in Mandalay beating protesters indiscriminately with batons before arresting them.

On February 8, the military issued orders banning public gatherings of five or more people in 36 townships, including in Yangon, Mandalay, Magway, and Sagaing regions and Chin, Shan, Mon, Kachin, and Kayah (formerly “Karenni”) states. The junta also imposed a curfew from 8 p.m. to 4 a.m. in the same townships. Despite the ban, an estimated hundreds of thousands of protesters demonstrated throughout the country on Tuesday against the military coup.

On February 8, Senior General Min Aung Hlaing addressed the nation on state television, saying he hopes for a “true and disciplined democracy,” after overthrowing the elected government and detaining State Counsellor Aung San Suu Kyi, President Win Myint, and scores of others.

As previously reported by Fortify Rights, on February 3, the Mandalay District Police Commander’s Office issued an internal memorandum instructing police to arrest protesters indiscriminately and shoot them with riot-control weapons. The next day, Mandalay police arrested five protesters after they staged the country’s first public demonstration against the coup. According to the Assistance Association for Political Prisoners, since February 1, authorities arrested or detained at least 170 people.

“Security forces have a moral and legal obligation to defy any unlawful orders to use excessive force against peaceful protesters,” said U.N. Special Rapporteur on the human rights situation in Myanmar Tom Andrews on Twitter on Monday.

According to the United Nations Human Rights Guidance on the Use of Less-Lethal Weapons in Law Enforcement, “kinetic impact projectiles,” which includes rubber bullets, “should not be targeted at the head, face or neck.” The guidance further provides that such projectiles should “be used only with a view to addressing an imminent threat of injury to either a law enforcement official or a member of the public.”

Furthermore, the U.N. guidance provides that water cannons “should only be used in situations of serious public disorder where there is a significant likelihood of loss of life, serious injury, or the widespread destruction of property.” Water cannons should also only be used after law enforcement personnel have given warning and sought to “identify and isolate any violent individuals separately from the main assembly.”

On February 4, the U.N. Security Council “expressed deep concern” regarding the declaration of a state of emergency and the detention of State Counsellor Aung San Suu Kyi, President Win Myint, and others, but the body failed to explicitly determine the situation to be a coup d’état.

The Human Rights Council announced an emergency session on the situation in Myanmar to be held on Friday, February 12.

“The international community must stand unequivocally with the people of Myanmar right now,” said Matthew Smith.“Governments, including members of ASEAN, should impose sanctions against the architects of this coup and urgently go through all possible channels to end this crackdown.”

Correction: This news release was updated on February 10 to reflect a doctor’s testimony to Fortify Rights on brain death and to add additional names used by the victim. An earlier version of this news release incorrectly stated that Mya Thwate Thwate Khaing died from her injury and that a family member confirmed her death online.