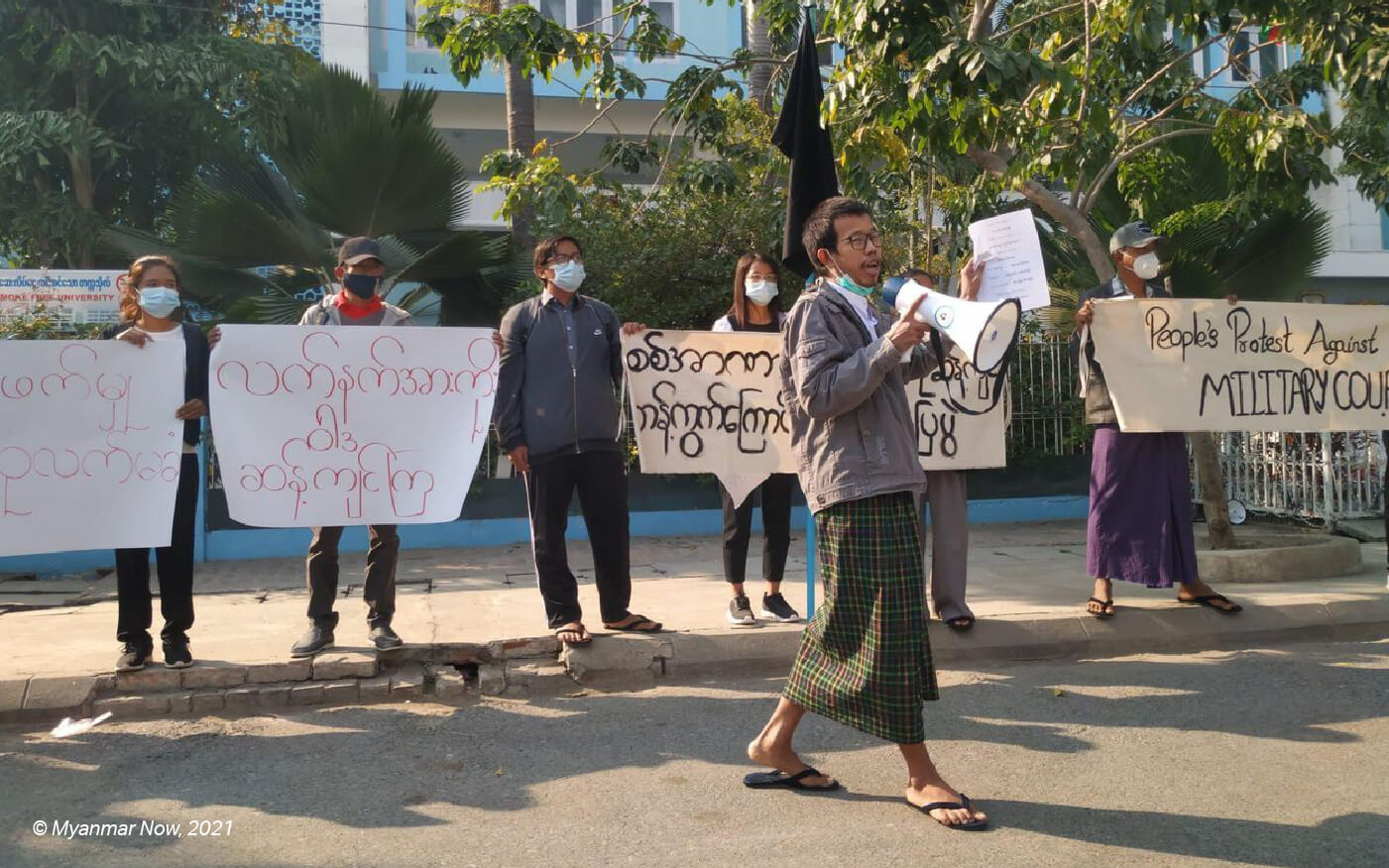 Since February 1, the military has arbitrarily detained scores of pro-democracy activists, protesters, and political opponents and blocked access to Facebook.

“The military’s drastic efforts to throttle any opposition to its putsch are fast returning the country to its darkest days of dictatorship,” said Ismail Wolff, Regional Director of Fortify Rights. “The rights to freedom of peaceful assembly, information, and expression are fundamental and particularly critical in the current climate.”

The police memorandum, obtained by Fortify Rights and bearing the Mandalay District police commander’s office’s official seal and the signature of the police captain, instructs police officers to “fire” at protesters of the military coup “with a 12-gauge anti-riot shotgun if the protester is just one person” and “with a 38-mm anti-riot gun if the protesters are in a crowd” (unofficial translation). Anti-riot weapons typically use non-lethal ammunition, such as rubber bullets.

The memo also instructs police to arrest protesters “on-site without needing to ask for approval” and to arrest doctors and nurses “if they protest outside the premises of a hospital” (unofficial translation).

Fortify Rights independently confirmed the authenticity of the memo.

The military detained more than 140 people since Monday, according to the Assistance Association for Political Prisoners.

The police detained the five men at Chan Aye Thar-Zan Township Police Station 8 in Mandalay for allegedly violating Section 4 of the Peaceful Assembly and Peaceful Procession Law (Peaceful Assembly Law), which requires assembly organizers to inform the authorities 48 hours in advance of an assembly.

On February 3, the Ministry of Transport and Communication ordered all telecommunications companies and internet service providers to “ban Facebook” to stop “the saboteurs” from “instigating and spreading fake news that can damage the interests of people” and “cause instability” and “misunderstanding among the public.” The directive invokes Section 77 of the Telecommunications Law and instructs providers to block the social media platform until midnight on February 7, 2021. Later the same day, the Ministry of Transportation and Communication ordered the blocking of all VPN servers, which could be used to circumvent the ban on Facebook.

On February 4, state-owned telecommunications companies Mytel and Myanmar Posts and Telecommunications (MPT), as well as Ooredoo—a subsidiary of the Qatari Ooredoo Group—enforced the order. The Norwegian-based company Telenor Myanmar said in a statement that the company “decided to comply with the directive” while “expressing grave concerns regarding [the] breach of human rights.”

As of January 2021, Myanmar has more than 28 million Facebook users and is the country’s most used social media platform. Following the coup, Facebook users throughout Myanmar used the platform to express their resistance to the military takeover and share information.

On February 1, the day of the coup, the Myanmar military cut internet and mobile-communication signals for several hours in various parts of the country, including in Naypyidaw, Yangon, Mandalay, and elsewhere. On February 3, mobile-internet services reportedly resumed in areas of Rakhine and Chin states, where the government had suspended service since June 2019.

In the lead up to the coup, the military alleged widespread voter fraud in the 2020 elections. The National League for Democracy party, led by Aung San Suu Kyi, won those elections in a landslide. On February 1, as part of the coup, the military detained President Win Myint, State Counsellor Aung San Suu Kyi, and dozens of other government leaders, parliamentarians, and activists.

On February 3, the military charged Aung San Suu Kyi under the Export and Import Law for allegedly importing and using walkie-talkies for her security detail. The military also charged Win Myint under the Natural Disaster Management Law for allegedly breaking COVID-19 restrictions on gatherings. Aung San Suu Kyi and Win Myint face maximum sentences of up to three years’ imprisonment and/or a fine if convicted.

The right to liberty, as guaranteed under Article 3 of the Universal Declaration of Human Rights (UDHR) and Article 9 of the International Covenant on Civil and Political Rights (ICCPR), includes protection from arbitrary arrests and detentions. Arrests and detentions are considered arbitrary when individuals are arrested or detained for exercising rights protected by international human rights law.

Article 19 of the UDHR and ICCPR also protects the right to freedom of expression, including the right to “receive and impart information and ideas through any media and regardless of frontiers.” Recognizing the internet as a “key means” for individuals to exercise this right, the U.N. Special Rapporteur on freedom of opinion and expression held that States have a positive obligation to adopt “effective and concrete policies and strategies . . . to make the Internet widely available, accessible and affordable to all.”

Furthermore, in a 2016 resolution on the promotion, protection, and enjoyment of human rights on the internet, the U.N. Human Rights Council condemned “unequivocally measures to intentionally prevent or disrupt access to or dissemination of information online” and called “on all States to refrain from and cease such measures.”

Telecommunications companies also have a responsibility under the United Nations Guiding Principles on Business and Human Rights, which calls on companies to “[a]void causing or contributing to adverse human rights impacts through their own activities, and address such impacts when they occur” and “[s]eek to prevent or mitigate adverse human rights impacts that are directly linked to their operations, products or services by their business relationships, even if they have not contributed to those impacts.”

Article 20(1) of the UDHR and Article 21 of the ICCPR protects the right to freedom of peaceful assembly, which requires States to facilitate peaceful assemblies. Restrictions may only be imposed when the restriction is provided by law and is proportional and necessary to accomplish a legitimate aim. Criminal penalties imposed for engaging in activities protected by international law, including exercising the right to peaceful assembly, are considered disproportionate and in contravention of international law.

International law also provides that law enforcement officials should only use force when strictly necessary and in ways that are lawful and proportionate to address a threat to a legitimate interest. For example, the United Nations Basic Principles on the Use of Force and Firearms by Law Enforcement Officials require law enforcement officials to apply non-violent enforcement measures first. When the use of force is unavoidable, the authorities must “exercise restraint in such use and act in proportion to the seriousness of the offence and the legitimate objective to be achieved.” These principles apply even in actions to disperse unlawful peaceful assemblies, during which officers should use force as a measure of last resort and “restrict such force to the minimum extent necessary.”

The police memo seen by Fortify Rights makes no space for the protection of the right to peaceful assembly. Instead, it directs police to shoot rubber bullets and restrict protesters by virtue of their status as protesters.

“The situation is getting more severe daily,” said Ismail Wolff. “Governments should urgently use their collective and bilateral power to prevent bloodshed in Myanmar and ensure the restoration of the elected government.”