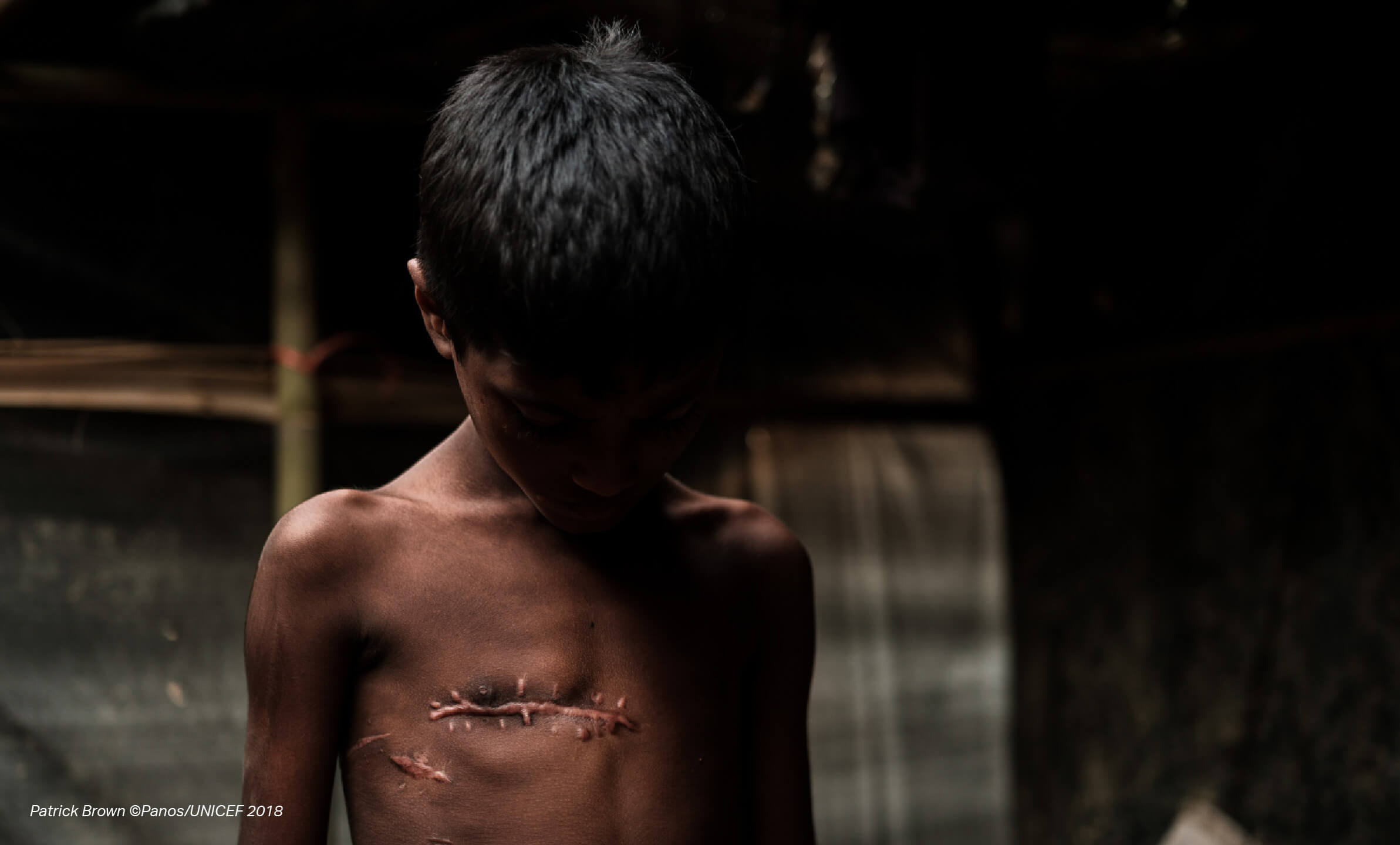 (BANGKOK, September 8, 2020)—The International Criminal Court (ICC) should swiftly prosecute two Myanmar Army soldiers who confessed to their involvement in massacres, rape, and other crimes against Rohingya in Myanmar, and the court should facilitate witness protection for them, said Fortify Rights today. Fortify Rights has reason to believe Myanmar Army Private Myo Win Tun, 33, and Private Zaw Naing Tun, 30, are in the custody of the ICC and in The Hague.

“This is a monumental moment for Rohingya and the people of Myanmar in their ongoing struggle for justice,” said Matthew Smith, Chief Executive Officer at Fortify Rights. “These men could be the first perpetrators from Myanmar tried at the ICC, and the first insider witnesses in the custody of the court. We expect prompt action.”

In the unpublished confessions, Myo Win Tun describes his involvement in killing Rohingya women, men, and children, and he admits to rape in Taung Bazar village and surrounding villages in Buthidaung Township in September 2017. Zaw Naing Tun confesses to his involvement in killings, burying bodies in mass graves, and other crimes against Rohingya in five villages in Maungdaw Township during the Myanmar Army’s 2017 “clearance operations.”

The soldiers provide the names and ranks of 19 direct perpetrators from the Myanmar Army, including themselves, as well as six senior commanders in the Myanmar Army whom they claim ordered or contributed to atrocity crimes against Rohingya, including a lieutenant colonel, a colonel, and three captains.

Both men separately claimed to be acting on orders from senior commanders to “exterminate all [Rohingya],” to “shoot all that you see and that you hear,” and to “kill all” Rohingya in specific areas. Significantly, both men were operational in two separate townships, simultaneously following orders under different commanders, which may indicate operational consistency between battalions, coordination, and intent to commit genocide.

In mid-August, the two men appeared on the Bangladesh-Myanmar border, requesting protection from Bangladesh authorities. As a state party to the Rome Statute, Dhaka notified the ICC of the presence of the two former soldiers. According to the legal counsel for the Government of Bangladesh, the men are no longer in Bangladesh.

The filmed confessions appear to be credible, said Fortify Rights. The information described in the confessions is consistent with human rights documentation of the 2016 and 2017 Myanmar Army-led “clearance operations” against Rohingya in northern Rakhine State. For instance, Zaw Naing Tun and Myo Win Tun identify six LIBs as responsible for crimes against Rohingya— LIBs 345, 353, 551, 552, 564, and 565. Fortify Rights as well as the Independent International Fact-Finding Mission on Myanmar previously identified these six LIBs, and others, as involved in genocide and crimes against humanity against Rohingya in 2017.

Myo Win Tun confesses to his involvement in destroying Rohingya villages in the vicinity of Taung Bazar in Buthidaung Township in September 2017. He also admits to rape, his involvement in the killings of 30 men, women, and children in Taung Bazar, and the additional killings of 60 to 70 civilians in “village after village” in the vicinity of Taung Bazar. Zaw Naing Tun similarly confesses that he and his battalion “wiped out” 20 Rohingya villages in Maungdaw Township in September 2017 and that he participated in the killing of an estimated 80 civilians, “including children, adults, women, and even elderly people” through coordinated massacres.

Based on these confessions alone, these two men may be directly responsible for killing up to 180 Rohingya civilians.

“The Second Chief Commander of the MOC-15, Colonel Than Htike, ordered us ‘to exterminate all kalar and their race will be exterminated,’” said Myo Win Tun in his confession. “The Muslim men were shot on their foreheads and kicked into the grave.” “Kalar” is a derogatory term used in Myanmar in reference to Rohingya.

Both soldiers describe the locations of mass graves. Myo Win Tun describes a mass grave of 30 bodies located on “Tower Tai Street,” which is reportedly located near the headquarters of LIB 552 and approximately six miles north of Maung Nu village—the site of a well-documented massacre.

The men identify six Rohingya villages in which they committed crimes against Rohingya civilians in 2017: Kyet Yoe Pyin, Ngan Chaung, U Shin Kya, Doe Tan, and Zin Paing Nyar villages in Maungdaw Township, and Taung Bazar village in Buthidaung Township. The U.N. and human rights groups, including Fortify Rights, previously identified these and other areas affected by the military-led “clearance operations” in 2016 and 2017. The men also confirmed their involvement in “clearance operations” in other unnamed villages.

“These confessions demonstrate what we’ve long known, which is that the Myanmar Army is a well-functioning national army operating with a specific and centralized command structure,” said Matthew Smith. “Commanders control, direct, and order their subordinates in all they do. In this case, commanders ordered foot soldiers to commit genocidal acts and exterminate Rohingya, and that’s exactly what they did.”

Under Article 28 of the Rome Statute, commanders of state security forces exercising control over those responsible for crimes against humanity and/or genocide—whether as physical perpetrators or some other form of liability—are liable for international crimes if they knew or should have known about the crimes and failed to take all necessary and reasonable measures to prevent or repress them. Article 25 establishes criminal liability for different forms of involvement in committing the crime, including as a direct, indirect, or co-perpetrator, or as perpetrators responsible for ordering, contributing to, or inciting criminal action.

Other details in the filmed confessions are consistent with previously documented eyewitness testimonial evidence, including how Myanmar Army soldiers attacked Rohingya villages during early morning hours and subsequently occupied affected villages for days or weeks, as well as how the Myanmar Police Force worked in concert with the Myanmar Army.

“Rahana,” 30, fled her home in Kyet Yoe Pyin, also known as Kiari Farang—a village in which Private Zaw Naing Tun was operational—with two children on August 26, 2017. She arrived in Bangladesh on August 30, 2017, and on that day she told Fortify Rights:

Fortify Rights documented how Myanmar Army soldiers threw infant children into fires in Kyet Yoe Pyin village. “Wai Ni,” a 35-year-old Rohingya mother of eight from Kyet Yoe Pyin, told Fortify Rights how Myanmar Army soldiers grabbed her two-year-old daughter from the arms of her 14-year-old daughter and threw her into a fire. She said: “We were standing nearby, but we were not allowed [to] grab the body out of the fire. We were screaming, hoping the military would not harm others. We could save [my older daughter] but not [the younger one].”

The Independent International Fact-Finding Mission on Myanmar similarly documented killings of infants and children in Kyet Yoe Pyin village as well as “a particularly brutal level of sexual violence” in the village, where “[w]omen and girls were subjected to mass gang rape, forced nudity, sexual humiliation and sexual assault.”

In his confession, Zaw Naing Tun says he served as a sentry guard for superior officers when they raped Rohingya women in Kyet Yoe Pyin. He says: “I witnessed Sergeant Pyae Phyoe Aung and Corporal Shwe Htwe rape three kalar–ma [Rohingya women] when we implemented the clearance operations in Kyet Yoe Pyin village.”

On September 6, 2018, the ICC granted the Chief Prosecutor jurisdiction to investigate and possibly prosecute the crime against humanity of forced deportation of Rohingya to Bangladesh, as well as persecution and other inhumane acts.

The U.N. Security Council should immediately refer the situation in Myanmar to the ICC, enabling the court to investigate and prosecute all of the crimes perpetrated against Rohingya, including the crime of genocide, said Fortify Rights.

Given their confessions and apparent transfer to The Hague, it is reasonable to assume Myo Win Tun and Zaw Naing Tun could plead guilty to the crimes to which they confessed in exchange for becoming “insider witnesses” for future trials. Such a development would significantly advance efforts to hold perpetrators accountable for atrocity crimes against Rohingya, said Fortify Rights.

The ICC has a witness protection program for various types of witnesses, including “insider witnesses.” Under Article 68(1) of the Rome Statute, the ICC is obligated to “take appropriate measures to protect the safety, physical and psychological well-being, dignity and privacy” of witnesses, and under Article 43(6), a victims and witnesses section at the ICC is responsible for “protective measures and security arrangements” for at-risk witnesses.

“We hope the willingness of these men to come forward carries like a wave of justice across the Myanmar military and officialdom,” said Matthew Smith. “More soldiers and government insiders in the country should come forward with information. There are systems in place to protect their rights.”