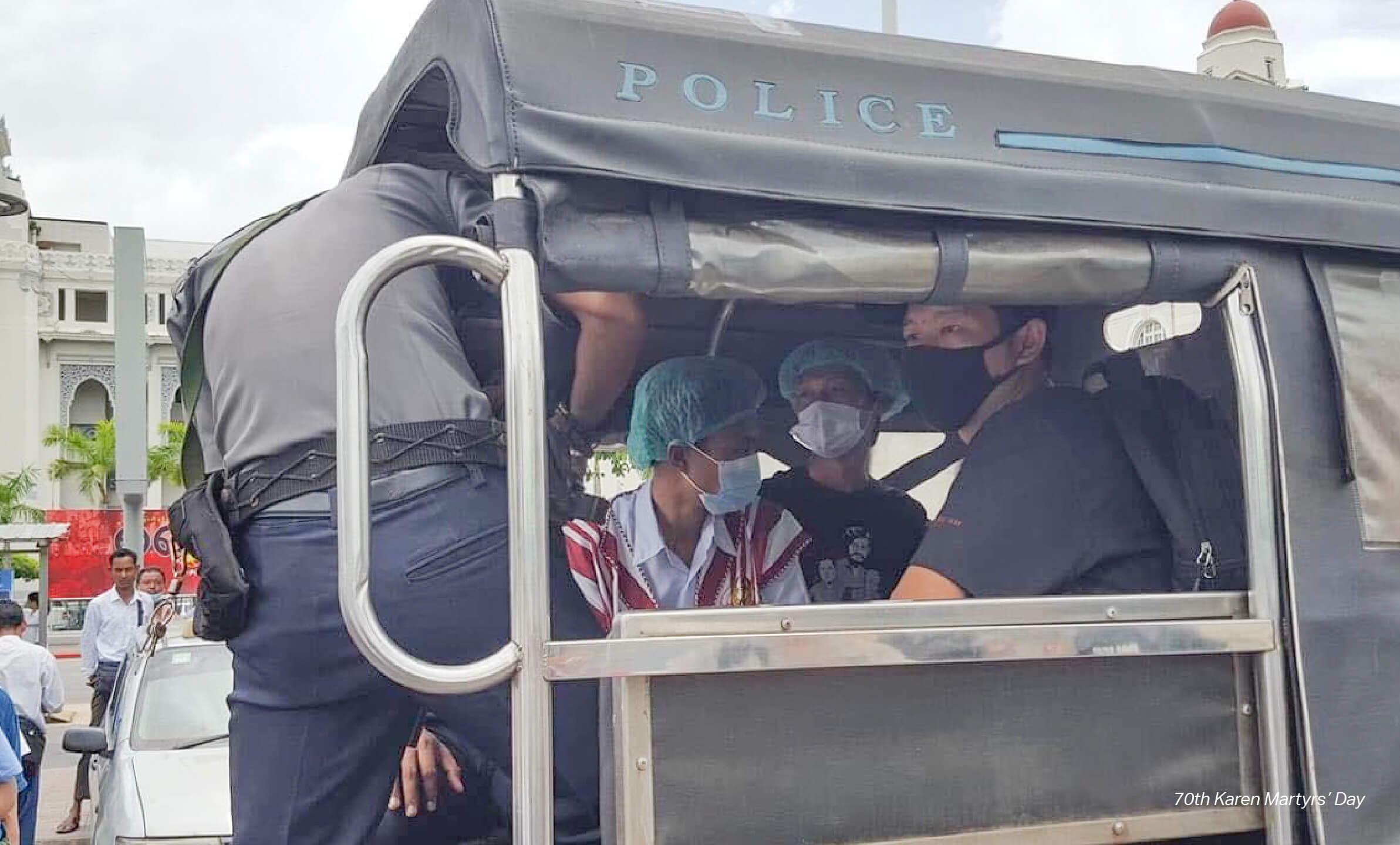 The two human rights defenders face up to one month imprisonment and/or 10,000 Myanmar Kyat (US$7.25) in fines under Section 20 of the Peaceful Assembly and Peaceful Procession Law (the “Peaceful Assembly Law”) for allegedly violating conditions set by the authorities for the gathering.

“Myanmar’s relentless assault on freedom of expression must stop,”said Matthew Smith, Chief Executive Officer of Fortify Rights. “Marking the anniversary of Karen Martyrs’ Day is not a crime, and the complaint against Sa Thein Zaw Min and Saw Kwar Ler should be dropped.”

On August 12, ethnic-Karen human rights defenders organized a gathering in Maha Bandula Park located in front of Yangon City Hall to mark the 70th anniversary of Karen Martyrs’ Day. According to the organizers, the authorities granted permission to hold the gathering from 8 a.m. and to 2 p.m. However, the Kyauktada Township police interrupted the event and arrested the two organizers around 11:30 a.m., claiming that permission had only been granted for the event to continue to 11:00 a.m. The police held Sa Thein Zaw Min, 23, and Saw Kwar Ler, 22, at the Kyauktada Township police station before releasing them on personal recognizance at 2:45 p.m.

Karen Martyrs’ Day commemorates the death of Karen leader Saw Ba U Kyi, a founding father of the Karen National Union (KNU), who the Myanmar army killed in 1950. The Myanmar military and the KNU’s army—the Karen National Liberation Army—have been at war since 1949.

The Government of Myanmar should amend the Peaceful Assembly Law and bring it in line with international human rights law, said Fortify Rights.

Under international human rights law, restrictions on the rights to freedom of expression and peaceful assembly are permissible only when provided by law, proportional, and necessary to accomplish a legitimate aim. However, as noted by former U.N. Special Rapporteur on the Rights to Freedom of Peaceful Assembly and of Association Maina Kiai, “freedom is to be considered the rule and its restriction the exception.” Furthermore, the U.N. Human Rights Committee has held that imposing criminal penalties, including fines and imprisonment, for holding a peaceful assembly is incompatible with human rights law.

In April 2020, Athan and Fortify Rights documented violations of the rights to freedom of expression and peaceful assembly under the Peaceful Assembly Law in Myanmar in a joint report entitled, “Our Demands are for All Students: Violations of Students’ Rights in Mandalay, Myanmar.”

“The Peaceful Assembly Law should facilitate protests, not criminalize them,” said Matthew Smith. “It’s time to amend this law and stop the arrests of peaceful protesters.”