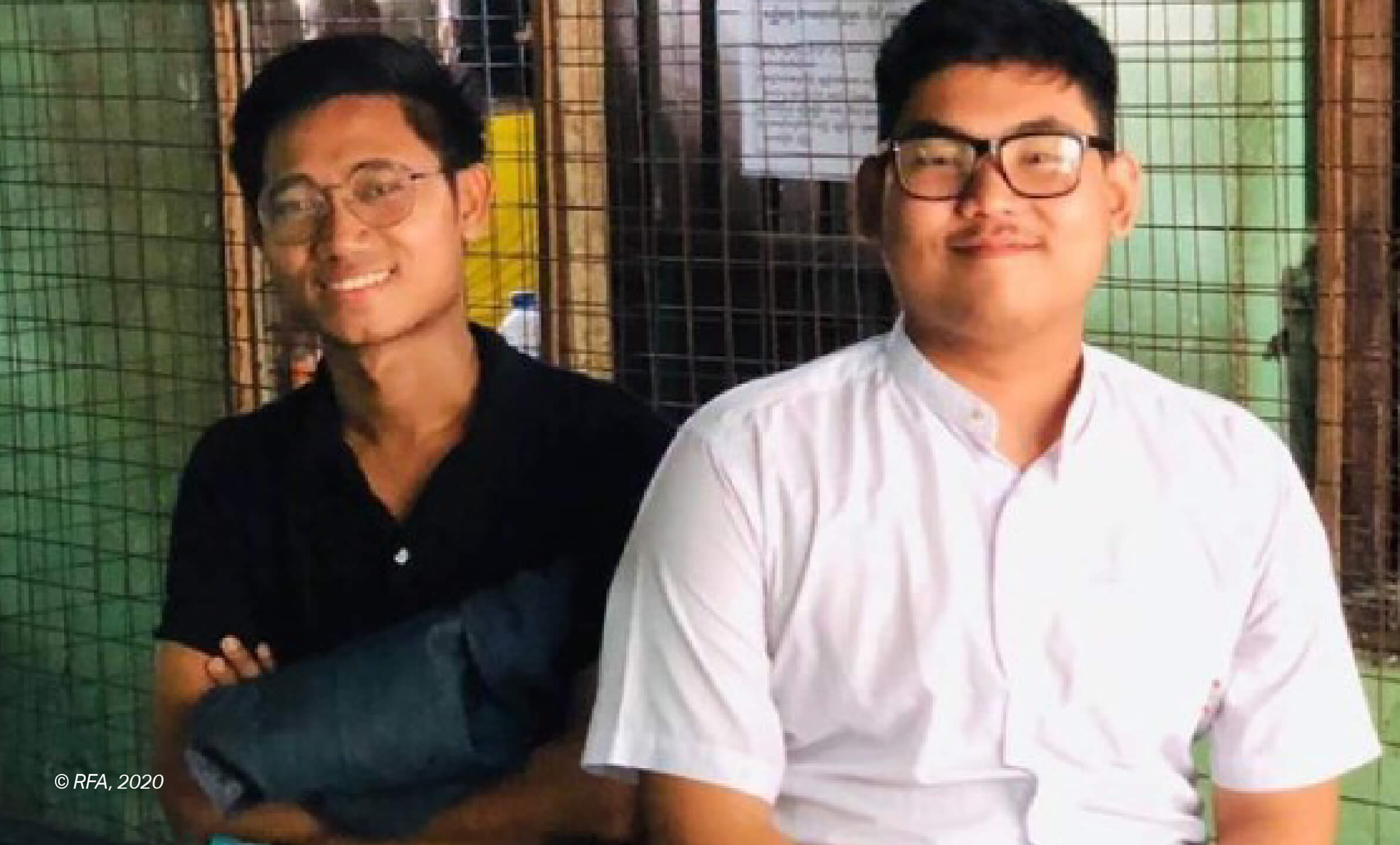 (YANGON, July 30, 2020)—Myanmar authorities should immediately release Myat Hein Tun and Kyaw Lin, two student leaders of the Rakhine Students’ Union imprisoned for protesting internet restrictions in Rakhine and Chin states, said Fortify Rights today. On July 23, the Kamayut Township Court sentenced the pair to one-month in prison for failing to inform the authorities in advance of the protest.

“Myanmar’s crackdown on freedom of expression must end,” said Matthew Smith, CEO of Fortify Rights. “The government’s imprisoning of critics and human rights defenders is part of a much wider tapestry of abuse.”

On February 23, members of Yangon University’s Rakhine Students’ Union, the All Burma Federation of Student Unions (ABFSU), and Yangon University of Economics Students’ Union held a protest at the Hledan Junction in Yangon. The protesters demanded that the government lift the internet shutdown in Rakhine and Chin states without delay, hold accountable those responsible for an alleged artillery attack on a primary school in Buthidaung Township that injured 21 students on February 13, and provide international media with access to conflict-affected areas of Rakhine State.

The Government of Myanmar should provide reparations—financial and otherwise—to all nine students and other current and former political prisoners, Fortify Rights said.

Under the peaceful assembly law, failure to provide advanced notice of an assembly carries penalties of up to three months’ imprisonment and/or a fine of up to 30,000 Myanmar Kyat (US$19.50).

Maung Saungkha, a co-founder and executive director of the human rights organization Athan as well as a poet, is similarly facing criminal charges for protesting internet restrictions in Rakhine State. The Kyauktada Township Court is set to continue hearings in his case on August 6.

“The government is threatening to imprison human rights defenders and activists if they protest on the Rakhine issue in Yangon, which violates the right to freedom of expression,” said Maung Saungkha.

Additionally, on June 21 in Kyaukphyu Township, Rakhine State, a police officer brought criminal complaints against Min Za Aung, 32, and Nay Soe Khaing, 31—ethnic Rakhine/Arakanese human rights defenders involved in the Arakan National Party’s Youth Affairs Committee and the Coral Child New Generation Youth Group—for posting photos of themselves on social media wearing T-shirts that read “End Internet Oppression.” Hearings in this case began on July 13 at the Kyaukphyu Township Court and are expected to continue through the end of September.

The Government of Myanmar has claimed the internet restrictions are “temporary” and in place to prevent the Arakan Army (AA) from detonating remote-controlled explosive devices. An estimated one million civilians reside in areas targeted by the internet blackout, which is now the world’s longest ongoing blackout.

On January 23, the International Court of Justice in The Hague ordered Myanmar to comply with several “provisional measures” to protect the rights of the Rohingya ethnic monority and preserve evidence relating to an ongoing case against Myanmar for genocide.

On February 3, the AA published a statement online declaring that it would release evidence of mass graves of Muslims killed and buried by Myanmar armed forces in Rakhine State. The same day, the government cut internet access in portions of Rakhine State.

“Myanmar evidently has a lot to hide” said Matthew Smith. “These arrests and detentions, just like the internet ban, are unjustifiable.”