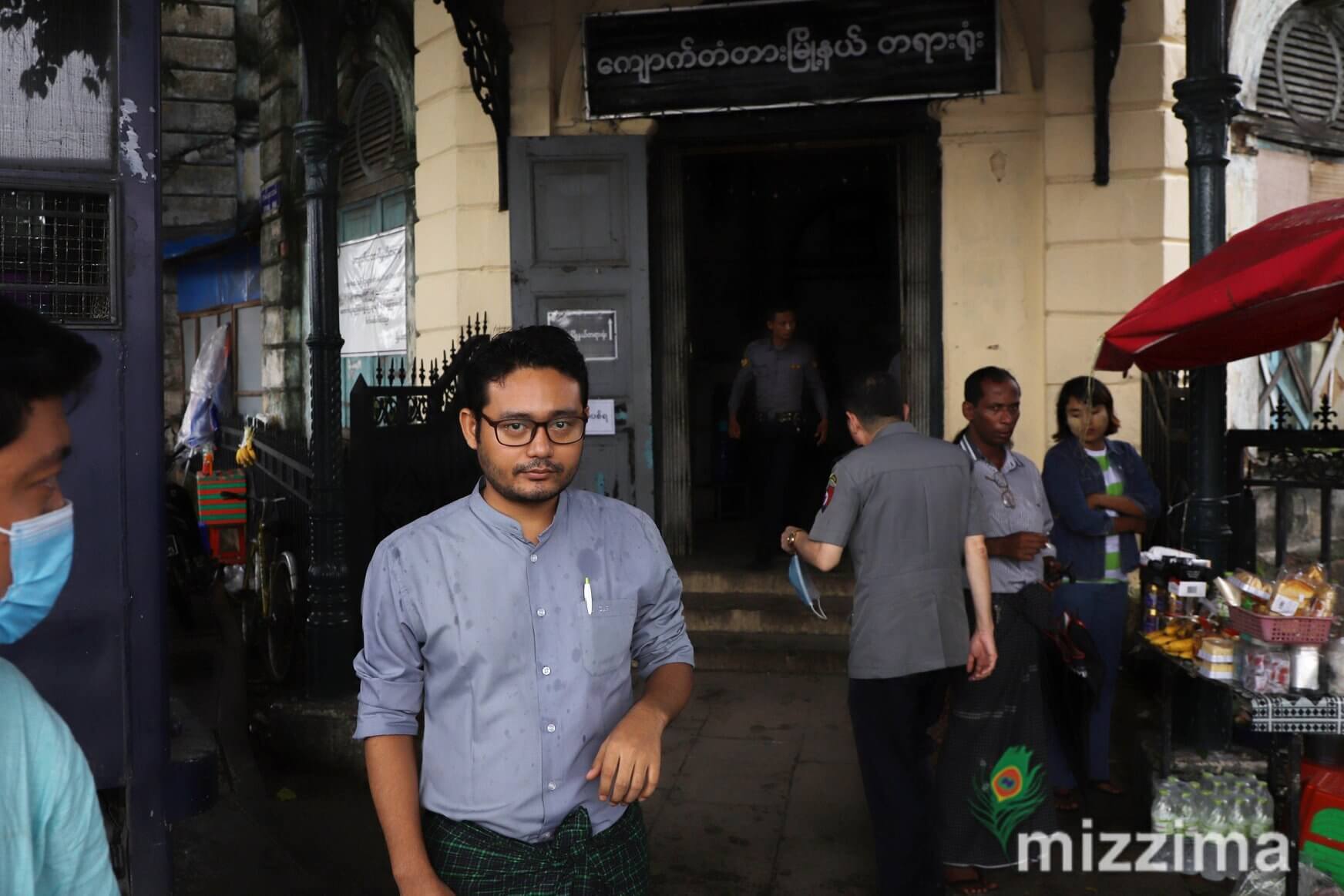 At the 44th session of the United Nations Human Rights Council in Geneva this week, the new U.N. Special Rapporteur on the situation of human rights in Myanmar, Thomas Andrews, expressed concern that freedom of expression in Myanmar appeared to be “shrinking” ahead of national elections scheduled for November 8. Special Rapporteur Andrews called on Myanmar to amend laws that have been used to violate freedoms of expression and assembly.

“The Government cut the internet in conflict-affected areas of Rakhine and Chin states and continues to prosecute human rights defenders who have called for lifting internet restrictions, which is a double violation of human rights,” Maung Saungkha told Fortify Rights by phone.

On July 14, Kyauktada Township Police Captain Myo Thet testified to the court that 27-year-old Maung Saungkha organized a protest and displayed a banner with others in Yangon in violation of Section 19 of the Peaceful Assembly and Peaceful Procession Law (PAPPL), which requires advanced notice to hold a protest. The charge carries a sentence of up to three months’ imprisonment and/or 30,000 Myanmar Kyat (US$20) in fines. During the first court hearing on July 7, the prosecutor submitted a list of six witnesses to the court. The court hearings are set to continue on July 21.

On June 21, on the one-year anniversary of the internet shutdown in Rakhine and Chin states, activists unfurled a Burmese-language banner over the Sule overpass bridge in downtown Yangon, reading, “Is the internet being shut down to hide war crimes and killing people?” Citing the banner, on June 22, Police Captain Myo Thet filed a complaint alleging violations of Section 19 of PAPPL against Maung Saungkha. The complaint, which Fortify Rights has seen, alleges four other people were involved in unfurling the banner but only identifies Maung Saungkha.

The Kyaukdata Township police apprehended Maung Saungkha on July 3 and brought him to the Kyauktada Township Court, which granted him bail.

“Criticizing government policies is protected under human rights law,” said Matthew Smith, Chief Executive Officer of Fortify Rights. “The internet blackout is wholly disproportionate. The government should immediately drop this and similar cases, amend the peaceful assembly law, and lift the internet ban, especially ahead of national elections in November.”

In recent weeks, Myanmar authorities have brought similar criminal complaints against other human rights defenders involved in protesting the internet blackout in Rakhine and Chin states.

On June 21, Ramree Township Police Major Zaw Win filed a case against Myo Min Tun, a youth leader with the Ramree Township Youth Network, for allegedly holding a protest without informing the authorities beforehand in which he called on the Myanmar government to lift the internet shutdown. Police officers apprehended Myo Min Tun at his home on June 25 and brought him to the police station. On the same day, the Ramree Township Court charged him with violating Section 19 of PAPPL. On June 25, the Court sentenced him to 15 days’ imprisonment and/or a fine of Myanmar Kyat 20,000 (about US$14). Myo Min Tun chose to pay the fine.

On June 21, in Kyaukphyu Township, a police officer brought a criminal complaint against Min Za Aung, 32, and Nay Soe Khaing, 31—ethnic Rakhine/Arakanese human rights defenders involved in the Arakan National Party’s Youth Affairs Committee and the Coral Child New Generation Youth Group—for posting photos of themselves on social media wearing T-shirts that read “End Internet Oppression.” On June 26, the Kyaukphyu Township police granted bail to Min Za Aung and Nay Soe Khaing. Both men were summoned to the court on July 6, but they failed to attend the hearing because they were traveling. On July 11, Kyaukpyu Police officers arrested Min Za Aung for allegedly absconding from the court when he returned from his trip. The Kyaukphyu Township Court held the first hearing in their case on July 13, and the court granted bail and set another hearing for July 21.

Since June 21, 2019, the Myanmar government has imposed restrictions on mobile internet communications in nine townships in Rakhine and Chin states, where the Myanmar military is engaged in armed conflict with the Arakan Army (AA)—a non-state army fighting for political autonomy and ethnic rights in Myanmar.

In September 2019, the U.N. Fact-Finding Mission on Myanmar reported that the Arakan Army was also responsible for abuses, “including patterns of forced labour and arbitrary deprivation of liberty, intimidation and theft.”

On July 8, the Myanmar Ministry of Foreign Affairs, which is led by Foreign Minister Aung San Suu Kyi, who is also State Counsellor, issued a statement on Facebook defending the internet blackout, saying, “The temporary internet suspension measure is necessary to prevent the AA from exploiting mobile internet technologies to detonate IEDs [Improvised Explosive Devices] and landmines, to incite hatred among different ethnic groups and to plan attacks or kidnappings of government officials.”

Escalation in fighting since the beginning of 2019 has displaced tens of thousands of civilians in conflict-affected townships in Rakhine and Chin states. The Arakan Information Center, a human rights monitor, reported that the military killed 271 civilians, injured 535, arbitrarily arrested 526, and disappeared 120 between January 2019 and May 2020. As of June 28, the conflict between the Myanmar military and AA displaced more than 77,000 ethnic Rakhine (also known as Arakanese) and Chin civilians. These numbers are increasing weekly and are in addition to an estimated 130,000 displaced Rohingya, whom the government has confined to more than 20 internment camps in five townships in Rakhine State for the last eight years.

U.N. Special Rapporteur Andrews encouraged Myanmar to heed the U.N. Secretary General’s call for a global ceasefire to armed conflicts. “The ravages of war are particularly onerous and escalating in Rakhine State, causing increasing numbers of civilian casualties and displacement,” he told the Human Rights Council.

On March 26, 2020, Fortify Rights called on the Government of Myanmar to immediately lift all internet restrictions in Rakhine and Chin states to protect against the COVID-19 pandemic. In May 2020, the government restored internet service in Maungdaw Township in Rakhine State.

“The internet blackouts are wrong and should be ended immediately,” said Matthew Smith. “These activists are right to demand an end to internet restrictions, and their calls for change should be heeded.”