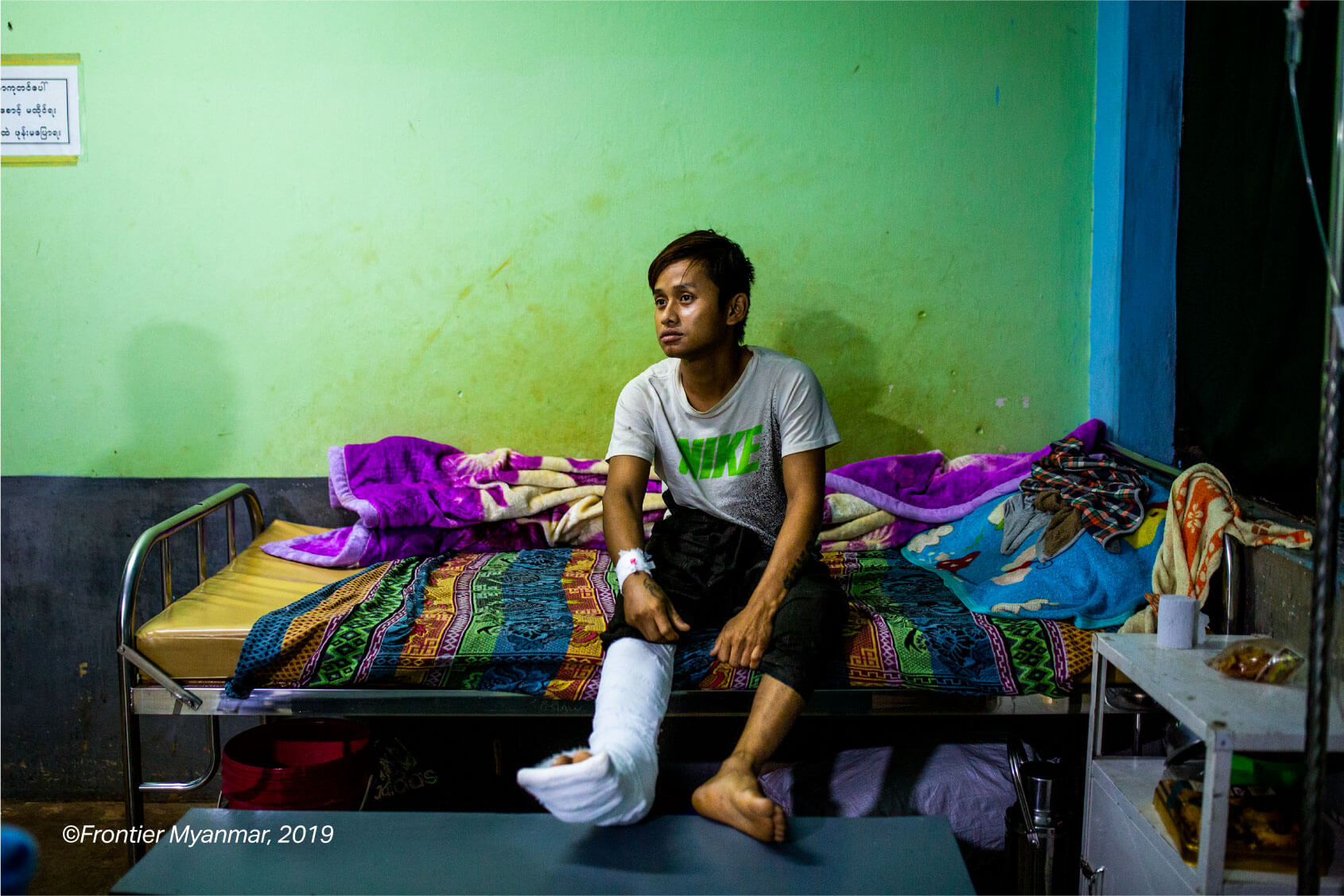 (YANGON, May 14, 2020)—The Myanmar military and ethnic armed groups should end the use of landmines and the Government of Myanmar should lift restrictions on humanitarian aid groups providing life-saving support to landmine survivors in ethnic areas affected by ongoing war, said Fortify Rights today. Since January 1, 2020, landmine explosions in Myanmar have reportedly killed or injured at least 68 civilians, while longstanding government-imposed restrictions on aid groups coupled with new COVID-19-related restrictions hinder access to essential aid and services.

“Myanmar is one of the world’s most landmine-affected countries and every casualty is one too many,” said Matthew Smith, Chief Executive Officer of Fortify Rights. “Humanitarian access was restricted before COVID-19 and it’s worse now. The government should immediately ensure humanitarian groups, especially community-based groups, are able to reach all casualties and survivors of landmines.”

“There was a mine explosion in Moemeik [in Mongmit Township, Shan State], and we could not help the person for two reasons,” Lwar Hlar Reang the General-Secretary of Ta’ang Student and Youth Union (TSYU) based in Lashio, northern Shan State, told Fortify Rights. “The first is the military prevents people from coming and seeing that person . . . The second reason is that it is difficult for us to travel right now because of the coronavirus.”

TSYU is a civil society organization that provides essential assistance to survivors of landmine explosions. Describing their work, Lwar Hlar Reang said: “Some [landmine survivors] need transportation in order to get to the hospital, some people need medical help and are in need of an operation. We provide transportation and clothes for the operation.”

“Coronavirus affects all our projects at the moment,” Lwar Hlar Reang added. “It’s really difficult because there are mine victims and communities of people who are affected by mine explosions and we can’t go to them directly . . . It’s difficult because we cannot travel to the community right now.”

In August 2018, Fortify Rights published a 70-page report, “They Block Everything”: Avoidable Deprivations in Humanitarian Aid to Ethnic Civilians Displaced by War in Kachin State, Myanmar, documenting how Myanmar authorities imposed onerous and unnecessary travel restrictions on humanitarian aid organizations, willfully depriving civilians of essential aid and services in violation of international human rights and humanitarian law. The report found that such willful denials of aid may amount to war crimes and called on the government to provide U.N., national, and international humanitarian aid organizations as well as human rights monitors with safe, sustained, and unfettered access to populations in need.

“We cannot reach out to these victims [of landmine explosions] because currently most of our field workers cannot travel because of COVID-19, and another reason is security because in northern Shan State the military sends troops in this region,” said Moon Nay Li, the former General Secretary the Kachin Women Association Thailand (KWAT), another civil society organization working with communities in Kachin and northern Shan states. “So that’s why our workers find it very difficult to travel from one place to another.”

Fabrice Vandeputte, the Program Director at Humanity & Inclusion, an organization that supports landmine survivors in Kachin and Karen (Kayin) states and Bago Region, told Fortify Rights: “The impact [of COVID] is massive because we provide personalized support [to mine victims] at home . . . Some heads of villages have imposed lockdowns, so we cannot access these villages or homes now.”

Moreover, freedom of movement is guaranteed under Article 13 of the Universal Declaration on Human Rights (UDHR) and Article 12 of the International Covenant on Civil and Political Rights (ICCPR). Although Myanmar is not a party to the ICCPR, the provisions of the UDHR and some provisions of the ICCPR are recognized as binding on all nations under customary international law. While international law permits states to restrict the right to freedom of movement “in the interests of . . . the protection of public health,” such restrictions must be prescribed by law, necessary for achieving a legitimate aim, proportionate to the interest to be protected, and they must be the “least intrusive instrument amongst those which might achieve the desired result.” Furthermore, any restriction should account for the disproportionate impact it may have on specific populations. If a restriction fails to meet one of these requirements, it is considered arbitrary under the law.

The travel restrictions imposed on humanitarian organizations providing essential services are not narrowly tailored and fail to account for the disproportionate impact on landmine survivors and others in need of critical aid and services. As such, the restrictions appear to contravene the requirements under human rights law.

The Government of Myanmar and other ethnic armed groups are bound by customary international humanitarian law to avoid indiscriminate attacks on civilians. Known as the principle of distinction, combatants must be distinguished from non-combatants—a distinction impossible to make with antipersonnel landmines, which are indiscriminate in nature. As such, the use of antipersonnel landmines by either the Myanmar military or ethnic armed groups is prohibited under customary international law.

The Continued Use of Landmines in Myanmar

Even before the COVID-19 pandemic began limiting the work of humanitarian organizations, landmine explosions in Myanmar continued unabated in recent months. In the span of the first 19 weeks of 2020, 28 separate incidents of landmine explosions reportedly killed 16 civilians, including five children, and injured 48 others, including 12 children. All of the explosions except one appear to have occurred in the context of civilians gathering essential materials, such as firewood, food, or water. The explosions occurred in states where active conflict is ongoing between the Myanmar military and ethnic armed groups. Out of the total 28 cases, 13 explosions were reported in Rakhine State, seven in Shan State, five in Kachin State, two in Thanintharyi Region, and one in Mon State. Neither the Myanmar military nor any ethnic armed groups claimed responsibility for these landmine explosions.

On December 19, 2019, the Myanmar government signed the “Strategic Plan for Resettling Internally Displaced Persons (IDPs) and Closing IDP Camps.” In unveiling the plan, the Union Minister for Social Welfare, Relief and Resettlement, Dr. Win Myat Aye, said, “The strategy was written focusing on all IDPs and IDP camps in the country”; however, he clarified that pilot projects will be implemented initially in Kachin and Rakhine states. According to the U.N. Office for the Coordination of Humanitarian Affairs, there are nearly 100,000 persons displaced by armed conflict living in more than 100 IDP camps in Kachin State as of February 2020.

The Strategic Plan calls for “closing IDP camps” and “[e]nhancing security arrangements, including through coordination for humanitarian demining where necessary.” However, Yeshua Moser-Puangsuwan, a landmine expert at the Landmine and Cluster Munition Monitor, told Fortify Rights that previous activity by the Myanmar military to address mines in Nam San Yang village in Kachin State, prior to the return of IDPs, employed bulldozers, which is “not mine clearance . . . it’s just shoving the landmines to the side.”

Ineffective landmine-clearance operations continue to pose a threat to civilians in Myanmar. For example, a landmine explosion on February 14, 2020 that reportedly injured a 55-year-old civilian, resulting in an amputated leg, took place near Nam San Yang village, where the Myanmar military claimed to have undertaken mine-clearance operations as part of an initiative to facilitate the return of civilians displaced by conflict. On January 30, 2019, Deputy commander of the military’s Light Infantry Division 101 Col Soe Kyaw Htet, told the Kachin News Group, “Our soldiers already cleared landmines around the village.”

In May 2018, a study by the Durable Peace Programme Consortium found that the majority of displaced Kachin civilians identified landmines as one of the top three obstacles preventing them from returning to their home of origin.

On March 4, 2020, the U.N. Special Rapporteur on the situation of human rights in Myanmar, Yanghee Lee, recommended the government “[e]nsure that any closure of IDP camps fully complies with international standards, respects IDPs’ rights,” ensures that “returns are to their place of origin or choice,” and that survivors “are not resettled in places affected by ongoing armed conflict or landmines.”

Fortify Rights has documented the use of antipersonnel landmines in the conflict areas of northern Myanmar since the Myanmar military and ethnic armed groups resumed fighting in Kachin State in June 2011.

On May 9, 2020, the Myanmar military announced a unilateral ceasefire from May 10 to August 31 to aid in the country’s efforts to respond to the COVID-19 pandemic. The ceasefire excludes armies previously designated by the military as “terrorist organizations,” such as the Arakan Army, the Kachin Independence Army, and the Arakan Rohingya Salvation Army.

In a statement at the U.N. General Assembly in October 2019, a Myanmar diplomat explained that “Myanmar is in a process of finalizing a mine clearance operation standard, namely ‘Myanmar National Mine Action Standard,’ aiming for conducting systematic demining.” However, the government has not reported any progress on the development or implementation of such standards.

Parties to ongoing armed-conflicts in Myanmar should immediately cease stockpiling and laying antipersonnel landmines and the Government of Myanmar should also accede to the 1997 Mine Ban Treaty and ensure that survivors can access healthcare, rehabilitation, and psycho-social support, said Fortify Rights.

“General restrictions on movement to stop the spread of COVID-19 are warranted, but exceptions must be made for humanitarian organizations providing life-saving assistance to survivors of landmines,” said Matthew Smith. “There’s no defensible reason to continue to use landmines. The government can end its use of landmines today.”