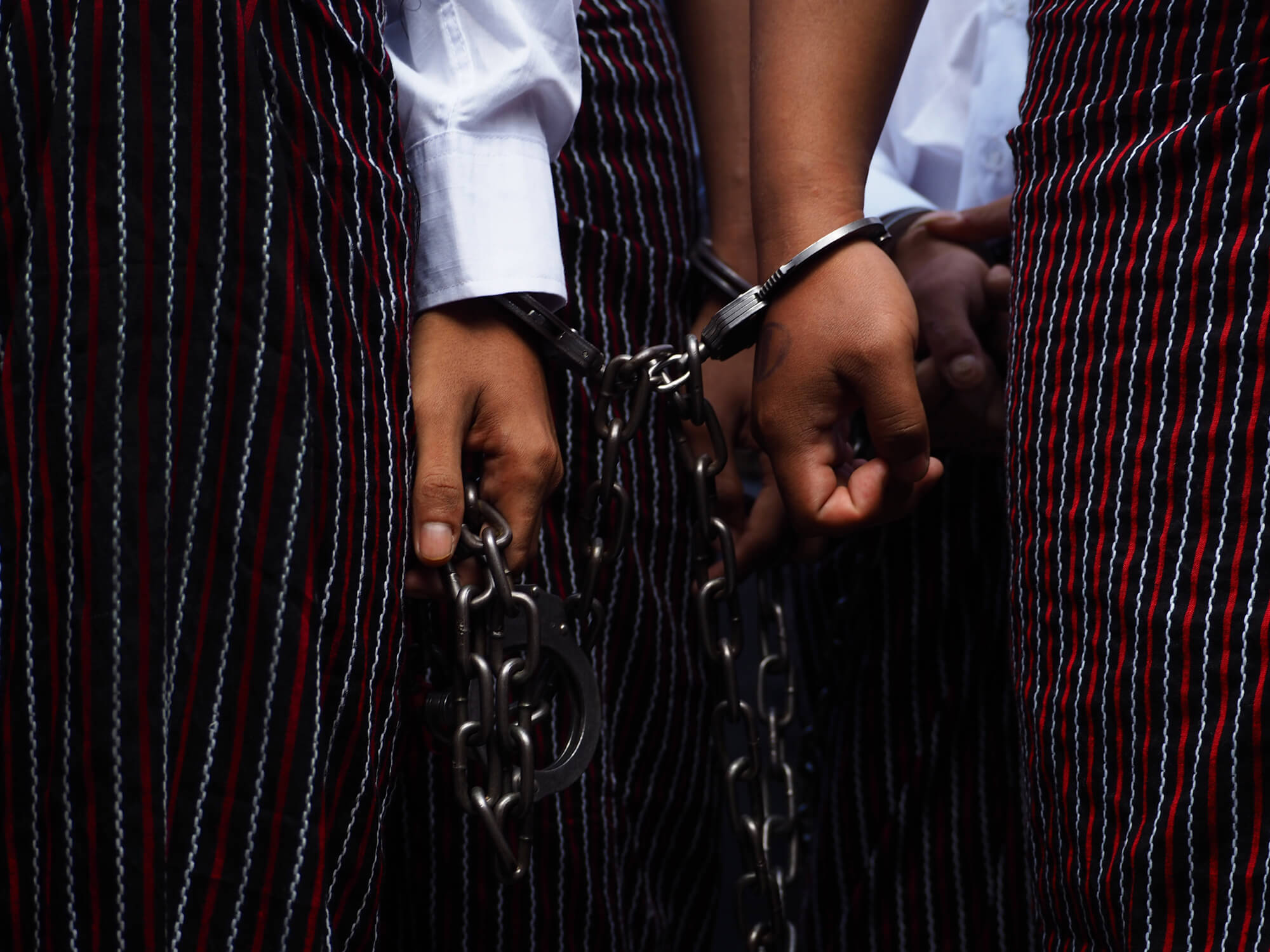 (YANGON, April 23, 2020)—The Government of Myanmar should protect free expression, free all political prisoners, and provide remedies to anyone who was arbitrarily detained, said Athan and Fortify Rights in a new report today. On April 17, Myanmar released nearly 25,000 prisoners as part of a presidential pardon; however, at least 182 political prisoners remain behind bars, and the government has failed to provide former political prisoners with effective remedies as required by international law.

The new joint report, “Our Demands are for All Students”: Violations of Students’ Rights in Mandalay, Myanmar, documents how Myanmar authorities arbitrarily arrested university students, tortured students in detention, and prevented students from exercising their rights to freedom of expression and peaceful assembly. The government has failed to provide remedies to affected students as well as  hundreds of other former political prisoners freed or released since 2015, including those freed last week.

“True democracy and freedom for activists in Myanmar is far away since the rights to freedom of assembly and expression are not guaranteed,” said Ye Wai Phyo Aung, co-founder of Athan. “Instead, the civilian government continues to shrink the space for students’ activism.”

Amid calls to release prisoners due to the ongoing COVID-19 pandemic, President Win Myint pardoned more than 24,800 prisoners on April 17, including 18 political prisoners. The government of Myanmar has failed to provide remedies or justice for more than 740 political prisoners freed from Myanmar’s prisons since 2015.

Despite annual pardons to prisoners, the Myanmar government continues to arrest, detain, and imprison activists, journalists, and others for exercising their rights.

The 60-page report by Athan and Fortify Rights is based on a year-long, joint investigation. The report documents how the Myanmar government and university officials blocked university students from holding demonstrations for more security measures at Yadanabon University in Mandalay Region. The students faced arbitrary arrest and spent more than 80 days in prison, and some students reported beatings by prison guards. Upon release, the government failed to provide an adequate remedy to the students or share the results of an investigation into the beatings by prison guards.

This case is representative of many others in Myanmar.

“As the COVID-19 crisis deepens, it’s even more critical that the government free political prisoners and respect fundamental rights,” said Amy Smith, Executive Director of Fortify Rights. “The government should provide remedies to those who have suffered harm, including all those wrongfully deprived of their liberty.”

Myanmar announced on March 23 its first confirmed cases of COVID-19, the disease caused by a novel coronavirus spreading throughout the world. Myanmar prisons are notoriously overcrowded and have poor sanitation—factors that increase the potential spread of the disease.

Athan and Fortify Rights conducted 28 interviews for the report, including the seven students who were arbitrarily arrested, eyewitnesses to the protests, Yadanabon University officials—including professors and administrators—a parliamentarian, journalists, civil society activists, and others.

The report details how students at Yadanabon University involved with the All Burma Federation of Student Unions (ABFSU)—a nationwide student organization in Myanmar with a long history of political activism—organized a series of protests between November 2018 and January 2019. The protests called for increased security measures and other improvements on campus following a spike in crime, including several student murders in Mandalay Region. Yadanabon University officials prevented a group of students from protesting on campus by either closing the gates of the university or stationing professors at the gate to stop protesters from entering the campus. In one incident, a professor threatened to beat the student protesters with a hammer.

Despite such threats, the students continued their protests. As one student activist explained: “Our demands are not for us. Our demands are for all students.”

Following the third murder of a Mandalay student in four months, the rector of the university dismissed the students’ concerns about security on campus and told them: “We are all human. Humans can die.” In response, the students organized a mock funeral for government and university officials who failed to heed their calls for improved security measures for students.

The authorities charged the students with arson and violating the 2016 Peaceful Assembly and Peaceful Procession Law (the Peaceful Assembly Law), which requires protesters to submit advanced notification to the government before holding a protest. On February 13, 2019, the Amarapura Township Court found all seven students guilty of both charges and sentenced them to three months in prison.

While in prison, four of the students reported to Athan and Fortify Rights that prison guards beat them. One student said:

The students described protracted pain from the beatings.

The Convention against Torture and Other Cruel, Inhuman, or Degrading Treatment or Punishment defines torture as “severe pain or suffering, whether physical or mental,” intentionally inflicted for a specific purpose. The right to be free from torture and other forms of ill-treatment is a fundamental human right protected by international criminal law, international human rights law, and customary international law, which all states, including Myanmar, are bound to uphold.

Although government officials conducted an investigation into the student’s allegations of beatings in prison, as of the time of writing, the authorities have not publicly published or provided the students with a report on their findings or the outcome of the investigation, despite requests by the students.

The case of the seven Mandalay students is emblematic of broader systemic issues in Myanmar with regard to restrictions on basic rights, particularly the rights to freedom of expression and peaceful assembly, as well as the lack of remedies for former political prisoners and others arbitrarily detained in Myanmar. According to the Assistance Association for Political Prisoners, more than 180 political prisoners remain behind bars in Myanmar, and human rights defenders continue to face terms of wrongful imprisonment for exercising rights protected by international law.

The rights to freedom of expression and peaceful assembly are protected under international law and Myanmar’s domestic law. Article 19 and Article 20(1) of the Universal Declaration of Human Rights, to which Myanmar is a signatory, protects the right to freedom of opinion and expression and the right to peaceful assembly and association, respectively. These rights are also recognized as fundamental rights that states are bound to uphold under customary international law. Under Myanmar’s domestic law, Article 354(b) of the Myanmar Constitution provides for the right “to express and publish freely their convictions and opinions” and “to assemble peacefully without arms and holding procession.”

Despite these protections, the authorities continue to use overly broad laws, such as the Peaceful Assembly Law, to restrict the rights to freedom of expression and peaceful assembly. In recent years, the Peaceful Assembly Law has undergone a series of amendments, some of which remain incompatible with human rights law. New amendments proposed in 2018 that would further violate assembly rights in the country spurred widespread protests by civil society organizations and human rights defenders in Myanmar.

At the time of writing, the latest iteration of the bill to amend the Peaceful Assembly Law remains pending before Myanmar’s lower house of parliament.

The Right to an Effective Remedy

When fundamental rights are violated, international law provides for the right to “an effective remedy” as determined by a competent authority. Such remedies, described in more detail in the report, may include: “restitution, compensation, rehabilitation, satisfaction, and guarantees of non-repetition.”

The Government of Myanmar should provide all former political prisoners with effective remedies, including the seven Yadanabon University students highlighted in the report published today, said Athan and Fortify Rights.

To ensure such violations do not occur again, Athan and Fortify Rights called on the parliament of Myanmar to amend the Peaceful Assembly Law to remove provisions that restrict peaceful assemblies and its criminal penalties for exercising the right to peaceful assembly. The organizations also called on the government to ratify the Convention Against Torture, implement policies and procedures that end the use of torture throughout Myanmar prisons, and guarantee accountability for perpetrators of torture.

The report provides biographical profiles of six of the students involved in the protests at Yadanabon University, several of whom became politically active after learning about the earlier efforts of ABFSU students to advance education reforms in Myanmar. One such effort centered on a march that ended in a bloody crackdown by the Myanmar authorities in the town of Letpadan in Mandalay Region in March 2015. In October 2015, Fortify Rights and the International Human Rights Clinic at Harvard Law School published the report Crackdown at Letpadan: Excessive Force and Violations of the Rights to Freedom of Peaceful Assembly and Expression, bringing attention to restrictions on the rights to freedom of expression and peaceful assembly as well as the excessive use of force by police in Letpadan, Bago Region in 2015. ABFSU wrote the foreword to the report.

In this latest report, Athan and Fortify Rights highlight the continued restrictions on protest rights and the perseverance of students to defend their rights.

“I feel like I am the protector of student rights,” said Yadanabon University chapter president of ABFSU Kyaw Thiha Ye Kyaw. “I am not doing it for myself but for the whole student body and for the next generation. Because . . . we need a change.”