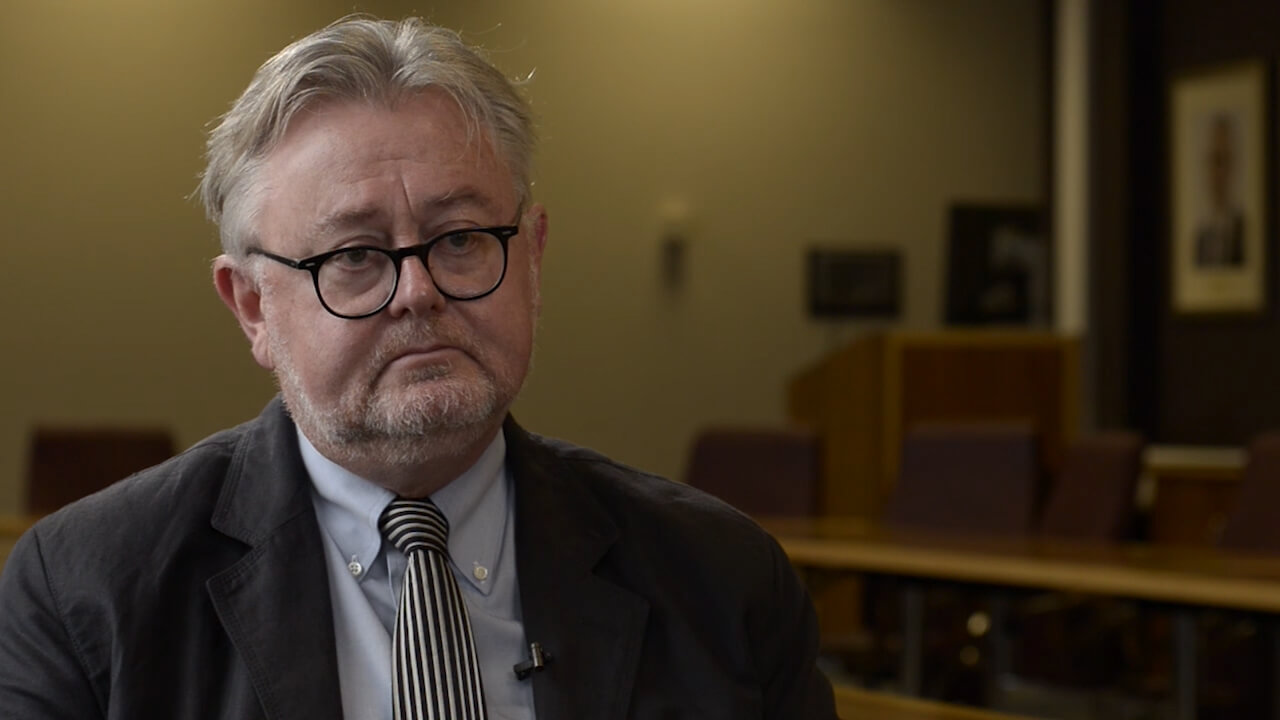 (BANGKOK and YANGON, March 6, 2020)—Myanmar’s legal counsel in an ongoing genocide trial at the International Court of Justice (ICJ) once compared the government’s treatment of Rohingya Muslims to Nazi Germany’s treatment of Jews during the Holocaust, according to previously unreleased video footage from 2013 obtained and published by Fortify Rights today. The Government of Myanmar hired Professor William Schabas in 2019 to defend it at the ICJ against allegations of genocide of Rohingya Muslims.

“Professor Schabas’s description of the situation of the Rohingya in 2013 was accurate, and the violations continued unabated for years, culminating in crimes of genocide in 2016 and 2017,” said Matthew Smith, CEO of Fortify Rights. “This footage is in the public interest. We decided to release it to demonstrate that Myanmar’s narrative of the situation in Rakhine State is based on lies, which Professor Schabas himself helped to debunk in 2013.”

The unedited video, filmed for the making of the 2013 Al Jazeera documentary “The Hidden Genocide,” includes more than 21-minutes of an interview with Professor Schabas, who elaborates on the possible genocide of Rohingya, references Nazis three times, and characterizes the Myanmar government as a “tyrannical regime” with respect to its treatment of Rohingya.

In 2016 and 2017, the Myanmar Army led a campaign of massacres, mass rape, and mass arson, displacing more than 800,000 Rohingya men, women, and children to Bangladesh. In November 2019, The Gambia filed a case at the ICJ in The Hague against Myanmar for failing to prevent or punish genocide against Rohingya.

During the case’s third day of hearings on December 12, The Gambia’s legal counsel highlighted a brief portion of the interview with Professor Schabas, which aired in “The Hidden Genocide.” In the film that aired, Professor Schabas said it was “not frivolous to envisage the use of the term genocide” with respect to Rohingya in Myanmar.

In response to The Gambia’s argument, Professor Schabas attempted to distance himself from the claim, telling the judges that the “journalist from Al Jazeera” misrepresented the interview, adding that the “journalist persistently tried to get me to apply the word genocide to the situation in Myanmar.” He went on to say, “My views will be a lot clearer if we could get a copy of the tape of the entire interview.”

Fortify Rights obtained the entire interview with Professor Schabas from Phil Rees, who maintains the rights to the footage and authorized its use.

In the footage, published in full today, Rees asks if “there might be a case to be made” that the Rohingya are facing genocide in Myanmar “in the very restricted definition of genocide,” to which Professor Schabas responds, in part, that there may be “an arguable case that genocide is taking place in the situation like that confronting the Rohingyas in Burma [Myanmar].”

Professor Schabas explains to Rees that he is “always cautious” about “cavalier use of the term” genocide and that “it’s important not to abuse the term and not to use it unnecessarily.” He continues: “But I don’t think that there’s much difficulty in asserting that in the case of the Rohingya, that we’re moving into a zone where the word can be used even if . . . we have insufficient evidence now to reach any firm conclusion.”

In the footage published today, Professor Schabas also elaborates on other international crimes against Rohingya in Myanmar, specifying “a range of measures,” including the denial of citizenship, the prevention of births and marriages, and restrictions on freedom of movement, claiming the policies were “designed to persecute this minority I think with a view that they would ultimately disappear.” Professor Schabas claims, prophetically, that many Rohingya “have fled the country, and more will continue to do so. It’s an inevitable consequence in a sense of persistent of acts of persecution.”

To date, the Government of Myanmar has neither repealed nor abolished any of the abusive policies or practices against Rohingya accurately described by Professor Schabas in 2013.

On international accountability, Professor Schabas explains that the International Criminal Court and the tribunals for Yugoslavia, Rwanda, and Sierra Leone “focus on the people at the top, what they sometimes call those who bear the greatest responsibility for these acts. And so that’s where the responsibility lies in Burma [Myanmar] too. I don’t think there is any doubt about it.”

On March 5, Professor Schabas gave a closed lecture at Yangon University on international law to hundreds of students.

On January 23, 2020, the ICJ ruled unanimously in favor of The Gambia’s request for provisional measures of protection for Rohingya in Myanmar. The measures require Myanmar to report to the court in May and then every six months thereafter for the duration of the trial, among other requirements, including to take affirmative actions to prevent genocide and preserve evidence of genocide. The unanimous vote means that all 17 judges, including the judge appointed to the court by Myanmar as well as the judge from China, voted against Myanmar and for the provisional measures.

“If Myanmar was teetering on the brink of a ‘genocidal paradigm’ in 2013, well before military-led massacres and mass rapes of Rohingya in 2016 and 2017, then surely a finding of genocide today is not ‘implausible’ as Myanmar now claims,” said Matthew Smith. “The Government of Myanmar should fully implement the provisional measures and cooperate with human rights monitors and international justice mechanisms.”