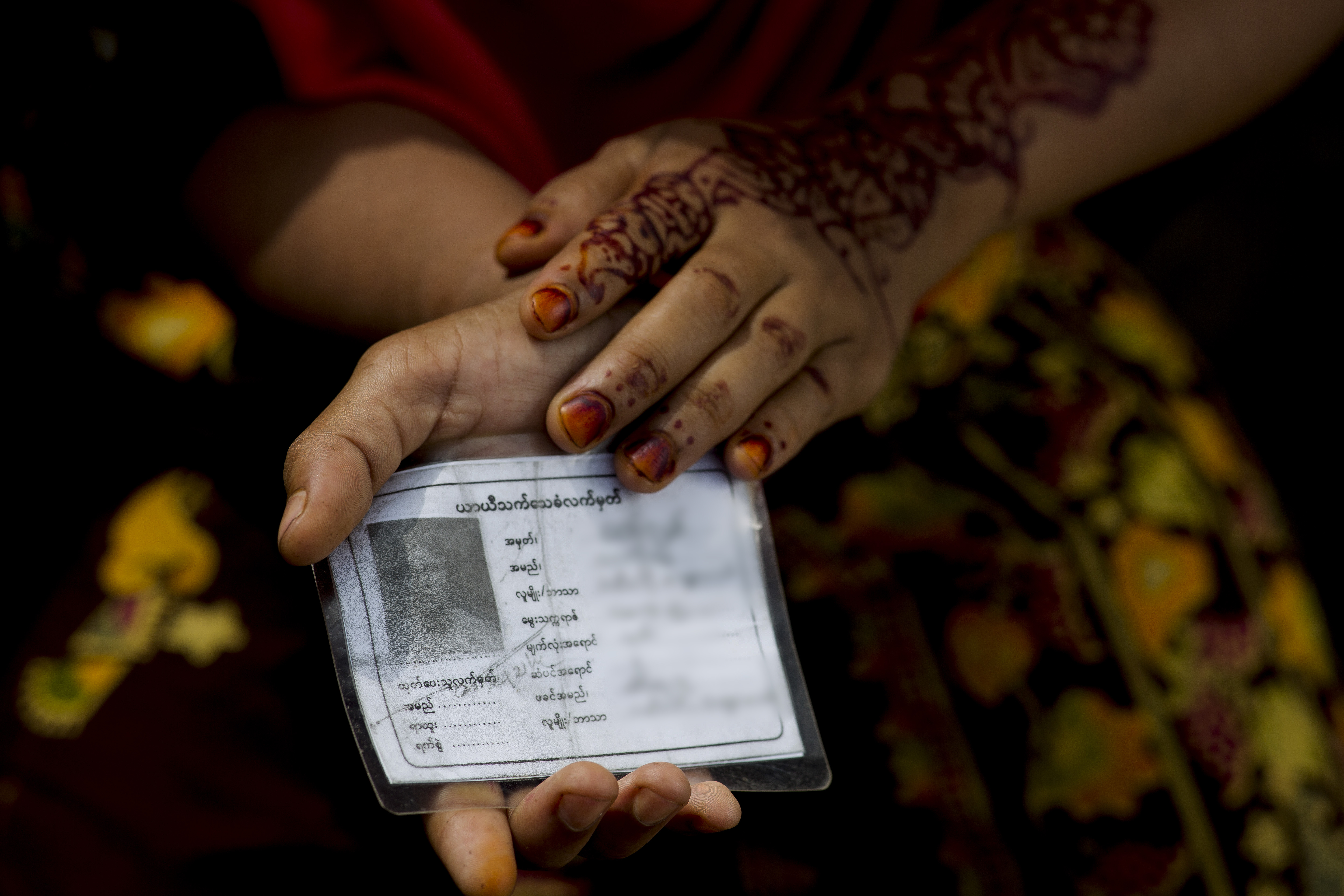 “The NVC is widely known as an abusive tool, and the government should scrap it without delay,” said Matthew Smith, Chief Executive Officer of Fortify Rights. “This new evidence implicates government officials in ongoing efforts to erase Rohingya identity and deny them full citizenship.”

Fortify Rights documented five recent cases of Myanmar authorities in Rakhine State forcing or coercing Rohingya to accept the NVC.The organization also obtained an internal government document informing state-, district-, and local-level officials that a team of officials would be deployed to issue NVCs to Rohingya in internment camps in Sittwe Township. The document, dated December 7, 2019, is signed by the head of the Sittwe Township Department of Immigration and Population, informing the administrator of Thet Kay Pyin that an “immigration mobile team” would be deployed to Thet Kay Pyin internment camp. The document states the team would be tasked with issuing NVCs to “Bengali people”—a term often used by Myanmar officials to refer to Rohingya, implying that they are from Bangladesh and their ethnic Rohingya identity does not exist. The township official copied state- and district-level officers of the Ministry of Labour, Immigration and Population on the letter.

A 31-year old Rohingya man in Thet Kay Pyin internment camp told Fortify Rights how state security officers forced him to accept an NVC on December 10, just three days after the document was issued. He said:

“I didn’t get to fill out the form [at the immigration office],” another Rohingya, 40, told Fortify Rights on December 18. “The immigration officer filled [the NVC form] out for me. I could see I was labeled as a ‘Bengali’ on the application . . . Taking the NVC was the only option if I wanted to work and travel freely.”

“I was forced to take the NVC,” another 27-year-old Rohingya resident in Rakhine State told Fortify Rights in November. “It’s blue color . . . I didn’t have to write any forms.”

The government of Myanmar continues to confine more than 125,000 Rohingya to more than 20 internment camps in five townships of Rakhine State. During violent attacks in 2012, extremists and state security forces forcibly displaced most of the Rohingya now confined to the camps.

Fortify Rights also obtained a copy of the “National Strategy on Resettlement of Internally Displaced Persons (IDPs) and Closure of IDP Camps,” adopted by the Union-level Ministry of Social Welfare, Relief and Resettlement on November 20. The document instructs authorities to facilitate “citizenship verification in camps slated for closure.” In practice, “citizenship verification” in Rakhine State is implemented through the NVC process.

Moreover, while the vast majority of more than one million Rohingya refugees in Bangladesh refuse to return to Myanmar until the government restores their rights and ensures protections, a small number of Rohingya have returned to Rakhine State informally and voluntarily. Authorities forced Rohingya who have returned to accept NVCs.

For instance, in November, a Rohingya man explained to Fortify Rights that he returned to Myanmar from Bangladesh informally on October 11, 2019. Upon arriving in Myanmar, authorities brought him and other Rohingya to a reception center. He told Fortify Rights:

Most Rohingya refugees in Bangladesh refuse to return to Myanmar so long as the government continues to force Rohingya to accept NVCs.

“With the NVC, we will not return to Myanmar,” said a 24-year-old Rohingya refugee woman originally from Buthidaung Township. “No Rohingya wants to accept the NVC by their own will.”

From December 18 to 19, a Myanmar delegation visited Rohingya refugee camps in Bangladesh, where they attempted to persuade Rohingya to accept NVCs.

“The Myanmar officials asked us to accept NVCs,” an 18-year-old Rohingya told Fortify Rights following the meeting, which he attended.

Following the first day of the visit, Director General of the Myanmar Ministry of Foreign Affairs Chan Aye told reporters, “We explained them [sic] issues related to citizenship and the NVC.”

Mohib Ullah, chair of the Rohingya-led civil society organization Arakan Rohingya Society for Peace and Human Rights, told Fortify Rights the day after the second day of meetings with the Myanmar delegation, on December 20:

In November, The Gambia opened a case at the ICJ against Myanmar for failing to prevent or punish genocide against Rohingya Muslims. On January 23, the ICJ will read its decision with regard to The Gambia’s request for provisional measures of protection for Rohingya in Myanmar. Provisional measures are binding orders from the court to the parties in the case to prevent further violation of the rights in dispute while the case is pending.

On December 10, in its request for provisional measures, The Gambia’s legal team presented evidence before the ICJ regarding ongoing atrocities against the Rohingya.

“A further step Myanmar is taking against the Rohingya as a group,” said attorney Tafadzwa Pasipanodya on behalf of The Gambia, “is the intensified effort to force them to accept ‘national verification cards’ that explicitly recognize cardholders as non-citizens and brand them as ‘Bengali.’”

Chinese President Xi Jinping is scheduled to visit Myanmar from January 17 to 18. The Government of China previously urged the governments of Myanmar and Bangladesh to fast track the returns of Rohingya refugees in Bangladesh to northern Rakhine State, despite objections by Rohingya, the United Nations, human rights groups, and others due to protection concerns.

“China is playing a non-neutral role in the Rohingya crisis and, unfortunately, that role is devoid of any concern for human rights, justice, and accountability,” said Matthew Smith. “China’s political protection for Myanmar has limits, and those limits will be on display as various international accountability mechanisms gain steam.”