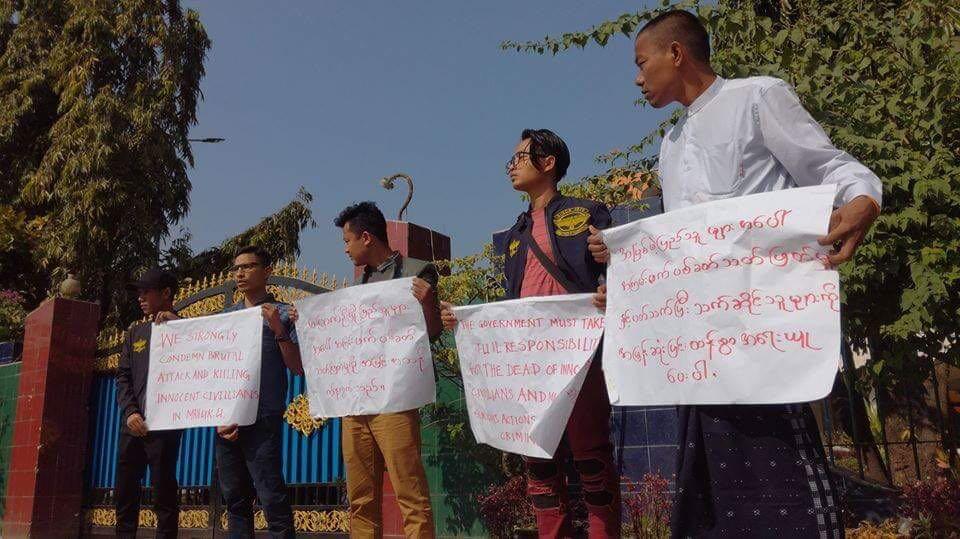 (YANGON, October 11, 2019)—Myanmar authorities should drop criminal complaints against Rakhine protester Than Hla and five others involved in a peaceful demonstration in Sittwe, Rakhine State, said Fortify Rights today. The Sittwe Township Court is scheduled to consider the complaint against Than Hla on October 24.

“Holding a peaceful protest is not a crime,” said Matthew Smith, Chief Executive Officer of Fortify Rights. “The government should stop arresting peaceful protesters and protect Than Hla and other civilians.”

On September 20, Myanmar police arrested Than Hla, a 36-year-old Rakhine lawyer from Sittwe, for failing to notify the authorities of a peaceful protest he joined on July 2, 2019—a violation under Section 4 of the Peaceful Assembly and Peaceful Procession Law that carries a sentence of up to three months’ imprisonment and/or 30,000 Myanmar Kyat (US$20) in fines.

Than Hla participated in the peaceful protest in July at U-Ottama Park in Sittwe with five ethnic Rakhine colleagues to demand accountability for violations committed against Rakhine civilians during the ongoing armed conflict in Rakhine State between the Myanmar military and the Arakan Army (AA).

The Myanmar military and AA  have engaged in armed conflict in Rakhine State since 2015. Clashes between the two armies displaced more than 60,000 civilians in seven townships of Rakhine State since January 2019. Fortify Rights documented how civilians, including children, were killed and injured during the conflict, and how the Myanmar Army forced Rakhine civilians to dig graves and carry supplies under the threat of death. The United Nations Fact-Finding Mission on Myanmar found in their final report that “forced labour, torture and ill-treatment” are “prominent features” of the Myanmar military’s conflict with the AA, constituting “violations of international human rights law and international humanitarian law, including war crimes.”

Myanmar police arrested Than Hla in U-Ottama Park in the late afternoon on September 20 while he was with his four-year-old son. The police detained Than Hla at Sittwe Myoma Police Station and released him on bail at 8 p.m. on the same day. On September 23, the Sittwe Township Court accepted the complaint against Than Hla. He also faces prosecution under the same law for his involvement in another protest on January 18.

The authorities also listed two women protesters—Oo Khaing Thein, 31, and Su Su, 25—in the arrest warrant as well as Aung Myint Myat, 26, Paing Shay, 22, and Maung Than Kyaw, 23. All five are currently in hiding.

On July 2, the day of the protest, Sittwe Township police officers searched Than Hla’s parent’s house in Sittwe without a warrant, according to Than Hla. Police Officer Kyaw Soe Khaing later filed criminal charges against Than Hla and his five colleagues on July 8.

Under international law, arrest and detention are unlawful when individuals are engaging in a protected activity, such as exercising their rights to freedom of peaceful assembly or expression. International law permits state authorities to restrict peaceful assembly or expression only if such restriction is considered “necessary in a democratic society in the interest of national security or public safety, public order (ordre publique), the protection of public health or morals or the protection of the rights and freedoms of others.”

Moreover, the requirement under Myanmar’s peaceful assembly law that protest organizers notify authorities in advance or face criminal charges is incompatible with international law and standards. Any failure to comply with administrative requirements or holding an unapproved peaceful assembly should not lead to fines or imprisonment.

“State Counsellor Suu Kyi’s government can amend the peaceful assembly law and other laws used to target human rights defenders,” said Matthew Smith. “The government’s failure to amend the law to bring it in line with human rights standards is inexcusable and part of an ongoing crackdown against free expression.”