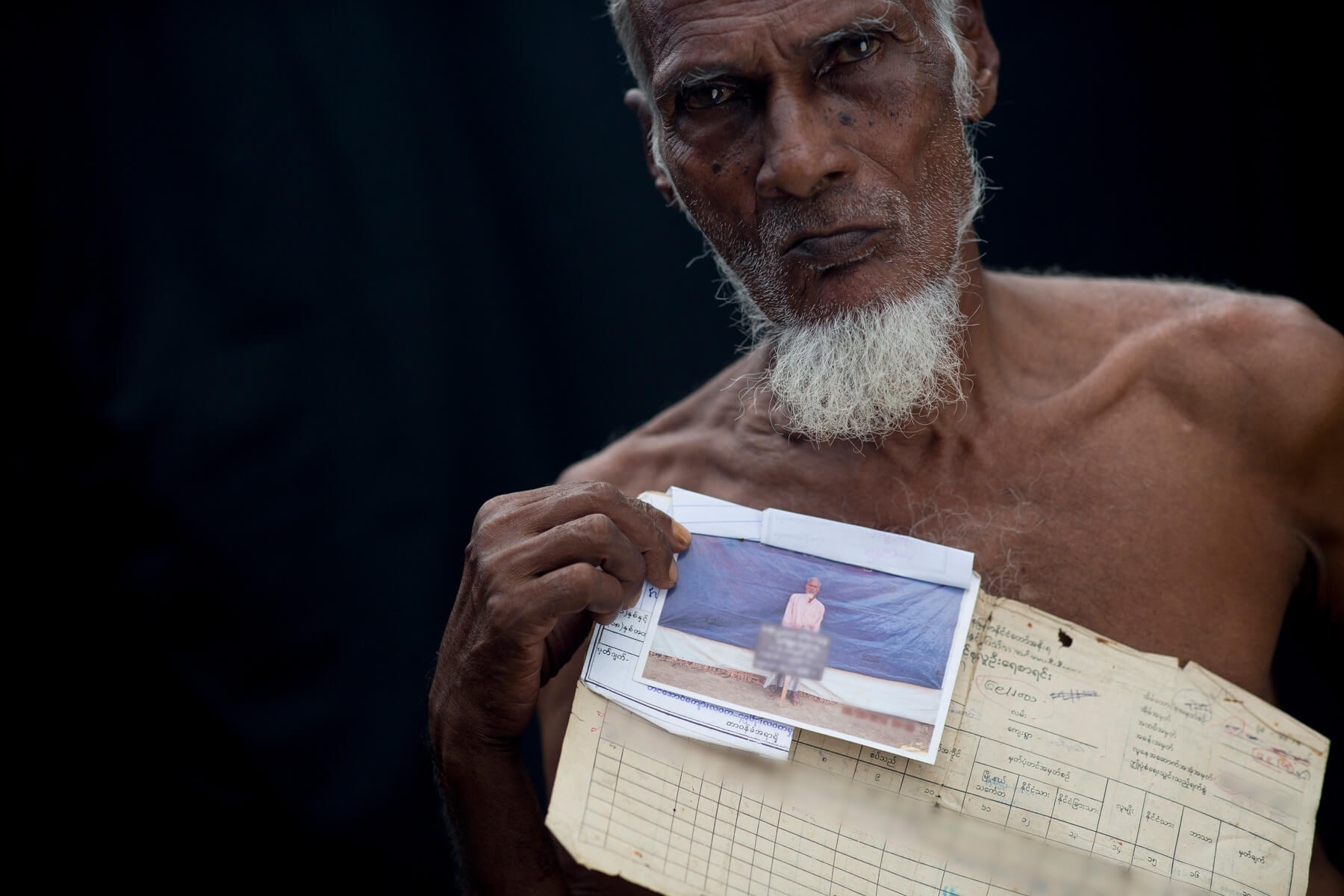 (Bangkok, September 3, 2019)—The Government of Myanmar should end discriminatory measures that deny Rohingya equal access to citizenship, said Fortify Rights in a new report today. The report exposes a systematic campaign to erase the identity of Rohingya Muslims.

“The Myanmar government is trying to destroy the Rohingya people through an administrative process that effectively strips them of basic rights,” said Matthew Smith, Chief Executive Officer at Fortify Rights. “This process and its impacts lie at the root of the Rohingya crisis, and until it’s addressed, the crisis will continue.”

The 102-page report, “Tools of Genocide”: National Verification Cards and the Denial of Citizenship of Rohingya Muslims in Myanmar, reveals how Myanmar authorities forced and coerced Rohingya to accept National Verification Cards (NVCs), which effectively identify Rohingya as “foreigners” and strip them of access to full citizenship rights. Myanmar authorities tortured Rohingya to accept NVCs and restricted the movement and livelihoods of Rohingya who refused NVCs. Due to a highly restrictive environment created by the government, international humanitarian agencies also effectively furthered the government’s NVC policies and erasure of Rohingya identity, according to the report.

The violations documented in the report associated with the government’s NVC process and the denial of citizenship are within the jurisdiction of the International Criminal Court to consider in its investigation into atrocity crimes against Rohingya in Myanmar, Fortify Rights said.

The new report is based on more than 600 interviews, including with 304 Rohingya women, in Myanmar, Bangladesh, and Malaysia. Fortify Rights interviewed eyewitnesses and survivors of human rights violations as well as members of civil society organizations and humanitarian aid workers.

The United Nations Office on Genocide Prevention warns of certain indicators that “provide an environment conducive to the commission of atrocity crimes,” including “increased politicization of identity” and discriminatory “measures or legislation” targeting protected groups. In addition to certain prohibited acts, such as killing members of a group, genocidal States often use legal and administrative tools to facilitate the destruction of a targeted group “in whole or in part.”

“The NVC is a tool of genocide,” a Rohingya refugee in Bangladesh told Fortify Rights. “We want our citizenship restored first, and there should be equality, safety, and security in our motherland.”

Successive Myanmar governments also created a series of administrative “citizenship scrutiny” processes involving a variety of “identification cards” that progressively limited the rights of Rohingya. The NVC is the most recent process that fails to confer rights to Rohingya and is implemented through further human rights violations.

“I was beaten everywhere—my head, back, chest, and all over my body,” a Rohingya farmer, 62, told Fortify Rights, describing beatings by Myanmar authorities who threatened him to accept an NVC, telling him, “If you don’t accept the NVC, we will kill you.”

“[The soldiers] closed the door and surrounded us, holding guns,” a Rohingya man, 61, from Baw Tu Lar village—also known as Bandola village— in Rakhine State’s Maungdaw Township told Fortify Rights. Myanmar authorities forced him and four of his seven family members to accept the NVC. “They separated men and women . . . The threats to receive an NVC are real. It’s a horrible situation for us.”

Beginning in October 2016 and August 2017—in response to Rohingya militant attacks on police—Myanmar security forces and civilian perpetrators razed several hundred Rohingya villages and massacred and raped Rohingya women, men, and children throughout northern Rakhine State, forcing nearly 800,000 to flee to Bangladesh. Fortify Rights, the Independent International Fact-Finding Mission on Myanmar (FFM), and others documented evidence of genocide and crimes against humanity.

The FFM similarly reported how “[p]ressure to accept the NVC increased in the months leading up to August 2017” and that Border Guard Police and Myanmar Army soldiers held a “series of more targeted and aggressive meetings” with Rohingya elders in mid-August 2017, demanding residents accept NVCs. According to the FFM, these meetings happened where “some of the most brutal ‘clearance operations’ subsequently took place.”

Fortify Rights further documented how Myanmar authorities coerced Rohingya to accept NVCs in order to travel and in exchange for access to subsistence livelihoods, creating severe economic pressure on Rohingya who refuse to identify as “Bengali” or other inaccurate identities.

“Last year, in September 2018, the authorities told me I could not fish,” a Rohingya fisher, 30, told Fortify Rights. “Without the NVC, we cannot move or work, so I had no choice but to take the NVC.”

The Myanmar government’s efforts to force Rohingya to accept NVCs also impacts the work of international humanitarian aid organizations operational in northern Rakhine State. Rohingya aid workers are required by the government to hold an NVC to travel and carry out their work.

Fortify Rights documented how at least five humanitarian aid organizations coerced Rohingya to accept NVCs from 2016 to 2019.“My country director said, ‘How can you stay with [our organization] without travel authorization?’ I was advised that it is better to take the NVC to carry out my duties,” a Rohingya aid worker in northern Rakhine State told Fortify Rights. “[The agency] said, if not, they will not hire me again next year. I started considering my job security, and if I talk to you honestly, I had to take the NVC.

Rohingya and foreign aid workers in northern Rakhine State also told Fortify Rights that Rohingya staff of international humanitarian aid organizations were unable to identify as Rohingya within their organizations and in the workplace.

“I was not able to say I was Rohingya in my place of work,” a 37-year-old Rohingya aid worker told Fortify Rights. “I was unable to say it at meetings or to people I would work with.”

Current senior staff of humanitarian organizations working in the area spoke about an ongoing “culture of silence” and “an environment of self- censoring.”

“The situation in northern Rakhine is exceedingly difficult but there’s no justification for excluding the term Rohingya from the workplace or requiring Rohingya aid workers to accept NVCs,” said Matthew Smith. “Aid groups are a part of the solution in northern Rakhine State, and the government is creating significant ethical challenges. Bold moral leadership is desperately needed.”

International humanitarian agencies in northern Rakhine State should establish a “common position” and “a coordinated, rights-respecting response” to the NVC process in order to protect the rights of Rohingya and enable Rohingya to opt out of the NVC process, if they choose, without fear of reprisals or loss of opportunities, Fortify Rights said.

The new report documents how Myanmar’s NVC process and denial of citizenship for Rohingya contravenes Myanmar’s international legal obligations, including the rights to nationality, non-discrimination, protection from torture or ill-treatment, freedom of movement, and an adequate standard of living.

Evidence in the report also addresses whether and how the NVC process and the 1982 Citizenship Law relate to the crimes against humanity of persecution and deportation as well as two prohibited acts of genocide—namely, causing serious mental harm to Rohingya, and deliberately inflicting on Rohingya conditions of life calculated to bring about the group’s physical destruction in whole or in part.

The U.N. Security Council should refer the situation in Myanmar to the International Criminal Court or create a separate criminal tribunal to investigate and prosecute the full spectrum of atrocity crimes in Myanmar, including crimes in Rakhine, Kachin, and Shan states, said Fortify Rights.

“Tools of Genocide” finds that the NVC process has not been a response to the crisis in Rakhine State, as the government suggests, but is rather “a fundamental part of the crisis.”

Fortify Rights recommends that the Myanmar authorities, with international support, restore equal access to full citizenship rights for Rohingya through a speedy administrative process developed with Rohingya in Myanmar, Bangladesh, and the diaspora. The government should accept all forms of documentation, including NVCs, National Registration Cards, White Cards, household lists, and other previous government-issued and U.N.-issued identity documents, as well as alternative forms of evidence, such as testimonial evidence, to support applications for citizenship.

The government should abolish the NVC process and amend the 1982 Citizenship Law so that it provides for a single citizenship status, rather than three, and so that the law ceases to base access to citizenship on ethnic categories, Fortify Rights said.