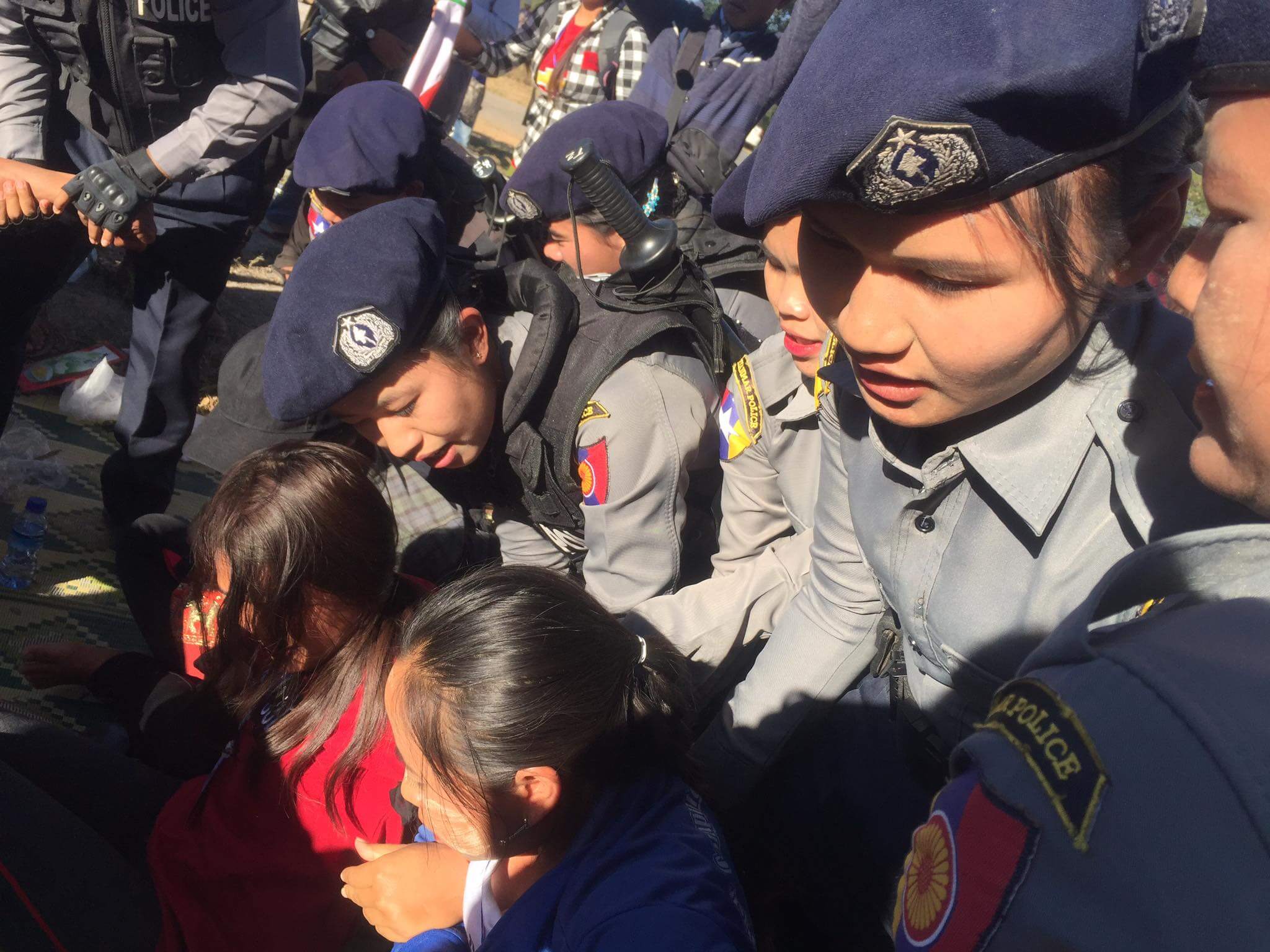 Ensure rights to freedom of assembly and expression

(YANGON, February, 8, 2019) – Myanmar authorities should stop an ongoing crackdown against peaceful protesters in Karenni State and immediately drop charges against 82 mostly ethnic Karenni activists arrested since July 2018 for protests in Loikaw, Fortify Rights said today. The protesters are calling on the government to remove a statue of General Aung San from Loikaw and ensure ethnic rights in a federal Myanmar. The Loikaw police arrested 10 protesters on February 8, 36 protesters on February 7, 20 on February 1, and 16 on July 3, 2018.

“These protests were peaceful and lawful,” said Matthew Smith, CEO of Fortify Rights. “The government should end this crackdown immediately. No one should spend any time in court or behind bars for exercising their human rights.”

If convicted, the protesters face up to six months’ imprisonment and 10,000 Myanmar Kyat (US$7) in fines for violations of Section 19 and 20 of the Peaceful Assembly and Peaceful Procession Law. Fifteen protest organizers face an additional two years’ imprisonment with hard labor and 300,000 Myanmar Kyat (US$200) in fines for alleged violations of sections 505(b) and 505(c) of the Myanmar Criminal Code for defamation and incitement, respectively.

On February 7, scores of local Karenni protesters gathered at the local headquarters of the National League for Democracy (NLD) in Loikaw, Karenni State (officially known as Kayah State), continuing calls for ethnic rights and protests against a government statue of General Aung San, who is widely considered a “founding father” of Myanmar. Local police broke up the protest and arrested and charged 36 participants with violations of the peaceful assembly law. The following day, February 8, police arrested 10 additional protesters and charged them under the same law.

On February 1, a group of Karenni youth organized a similar peaceful demonstration at Kandar-Haywun Park in Loikaw at the site of the statue. At 10 a.m., police from Loikaw Myoma Police Station arrested seven of the protest leaders. Fifteen minutes before carrying out the arrests, Loikaw Township Administration Officer Kyaw Moe read aloud a written order to halt the peaceful protest. Later that day, Loikaw police arrested an additional 13 Karenni youth activists who were present at the demonstration.

The Chief of Police of Loikaw Myoma Police Station Win Htay charged the 20 protesters, including seven women, with violating Section 19 and 20 of the Peaceful Assembly and Peaceful Procession Law. The Loikaw Township Court granted the protesters bail, and they now await trial.

Last year, on July 3, 2018,  the Loikaw police arrested 16 local activists in Loikaw, including four women, for organizing a march calling for ethnic rights in Myanmar and to protest the construction of the statue of General Aung San at Kandar-Haywun Park. More than an estimated 1,000 ethnic Karenni and others joined the peaceful march in Loikaw. The police charged the 16 organizers for allegedly violating Sections 19 and 20 of the peaceful assembly law. The authorities also charged 15 of the organizers under Section 505(b) and 505(c) of the Myanmar Criminal Code for allegedly committing criminal defamation and incitement, respectively. The Loikaw Township Court granted the activists bail, and they are now awaiting trial.

The Karenni State government installed the statue of General Aung San on horseback at Kandar-Haywun Park in Loikaw on January 31 and held an unveiling ceremony on February 2.

Three days before the unveiling of the statue, on January 29, Loikaw Township Administration Officer Kyaw Moe issued a local order banning peaceful assemblies in seven locations in Loikaw, including the area near the new statue. Despite the order, on the day of the statue’s installation, January 31, seven Karenni youth gave public speeches and distributed pamphlets about Karenni history in Kandar-Haywun Park, demanding that the NLD government and the Myanmar military fulfill Aung San’s promises of a federal democracy.

General Aung San is the father of State Counselor Aung San Suu Kyi. He established the Myanmar Army and paved the way for the country’s independence from colonial rule in 1948. Aung San signed the historic Panglong Agreement with ethnic Kachin, Chin, and Shan nationalities in 1947, promising autonomy for ethnic nationalities in a federal, democratic Myanmar, and less than six months later he was assassinated in Yangon alongside eight interim ministers.

Under international human rights law, states have an obligation to protect the rights to freedom of peaceful assembly and expression. States may only restrict peaceful assemblies when restrictions are provided by law, proportional, and necessary to accomplish a legitimate aim. Criminal penalties for peaceful protests and for instances of defamation are not justified under international law.

“These arrests not only violate international law, they go against the spirit of Panglong,” said Matthew Smith. “State Counselor Suu Kyi can intervene to stop this crackdown and ensure that rights to peaceful assembly are protected.”

20 protesters arrested on February 1 in Loikaw:

16 protesters arrested in July 2018 protest are: