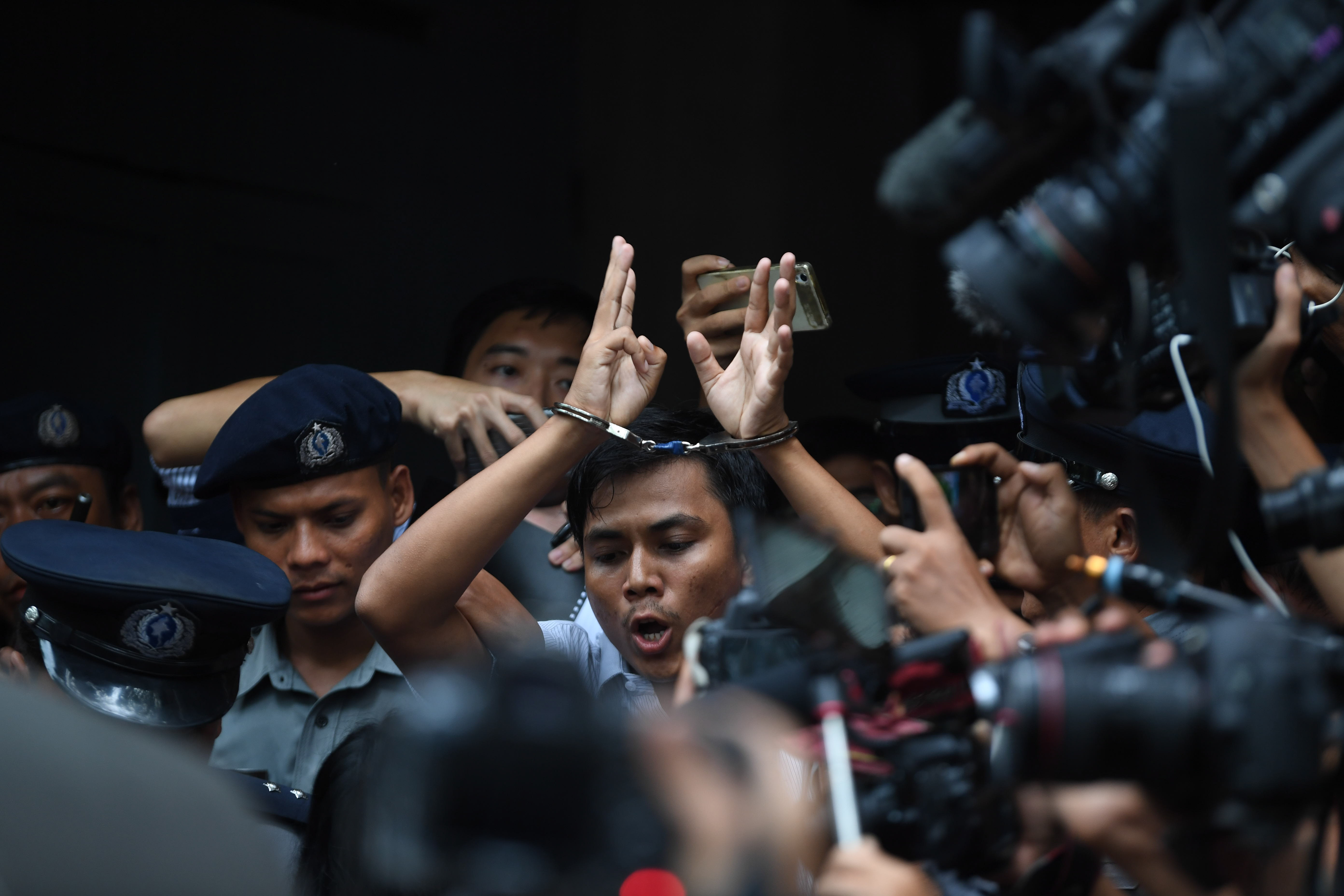 The 83 civil society organizations called on the Myanmar government, military, and all other relevant authorities to “immediately and unconditionally release Wa Lone and Kyaw Soe Oo, protect media freedom, and promote accountability.” The signatories said they interpreted the conviction and sentencing as a “crackdown on the right of access to information and media freedom.

“This was a sham trial of the highest order,” said Matthew Smith, Chief Executive Officer at Fortify Rights. “Wa Lone and Kyaw Soe Oo did nothing wrong. They were investigating mass atrocity crimes and should be immediately freed.”

Police arrested Wa Lone and Kyaw Soe Oo in Yangon around 11:30 p.m. on December 12, 2017. Earlier that evening, the two journalists attended a dinner with police officials near the Battalion 8 compound north of Yangon, where they were reportedly given documents related to the situation in Rakhine State. The pair had been investigating a massacre of Rohingya civilians in the village of Inn Dinn in northern Rakhine State. From December 12 to 26, 2018, the authorities held Wa Lone and Kyaw Soe Oo incommunicado at an unknown location, prompting worldwide calls for their release.

The arrest and ongoing detention of Wa Lone and Kyaw Soe Oo constitutes an arbitrary deprivation of liberty, Fortify Rights said. Arrest and detention are unlawful when individuals are arrested or detained for engaging in activity, such as exercising media freedoms, protected under international law.

On September 3, United Nations High Commissioner for Human Rights Michelle Bachelet said that the conviction of Wa Lone and Kyaw Soe Oo “follows a legal process that clearly breached international standards. . . . I call for their conviction to be quashed and for them to be released, along with all other journalists currently in detention for their legitimate exercise of the right to freedom of expression.”

On January 10, in response to the Reuters investigation, the Myanmar military admitted in a statement that security forces and villagers captured and summarily executed 10 “Bengali terrorists”—a pejorative term for Rohingya Muslims—and buried them in a mass grave near Inn Din, claiming that “ethnic Buddhist villagers were threatened and provoked by the terrorists.” This marked the military’s first admission of wrongdoing against Rohingya in Rakhine State since major military operations began in October 2016.

In July, Fortify Rights published a 160-page report exposing how the Myanmar authorities made “extensive and systematic preparations” for genocidal attacks against Rohingya civilians during the weeks and months before Rohingya militants attacked police on August 25, 2017.

“Democracy cannot take root without a free press,” said Matthew Smith. “The conviction of Wa Lone and Kyaw Soe Oo is an all-time low for press freedoms and reflects the state of human rights in Myanmar.”