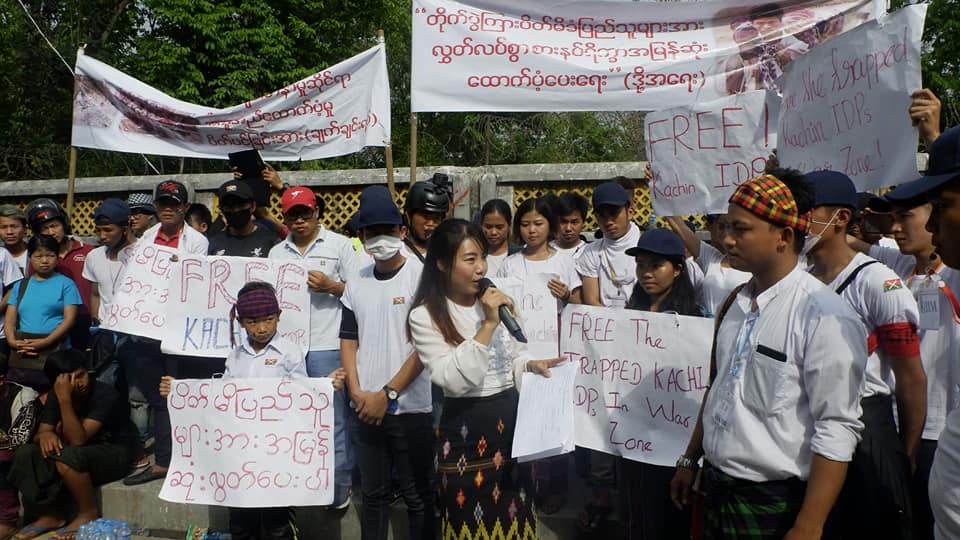 (YANGON, May 12, 2018)—The Government of Myanmar should immediately drop charges against nine human rights defenders who organized peaceful protests calling for the Myanmar military to ensure the protection and safe movement of civilians trapped by armed conflict in Kachin State, Fortify Rights said today. Since May 6, at least four protests have occurred in four cities throughout Myanmar. Additional protests are planned in Yangon this weekend.

“Peaceful demonstrations are not a crime, they’re a right,” said Matthew Smith, Chief Executive Officer of Fortify Rights. “The authorities should immediately and unconditionally drop the charges against these human rights defenders.”

Aung Hmine San, Soe Moe, and Poet Kalint are currently detained in Obo Prison in connection with the charges.

On May 9, Police Officer Thein Naing from the No. 8 police station in Chan Aye Tharzan Township, Mandalay arrested and charged Aung Hmine San, Soe Moe, and Poet Kalint following a peaceful gathering of more than 40 protesters on May 6 in Mandalay. The Chan Aye Tharzan Township Court sentenced Poet Kalint on May 10 to one month in Obo prison for allegedly violating Section 19 of the Peaceful Assembly and Peaceful Procession.Aung Hmine San and Soe Moe are scheduled to appear in court on May 18. All three are currently detained in Obo Prison.

In addition to the nine human rights defenders who now face charges, on May 9, Myitkyina Township Court similarly convicted three additional human rights defenders—Mr. Lum Zawng, 29, Ms. Sut Seng Htoi, 24, and Mr. Labang Awng Mai, 25—under Section 19 of the Peaceful Assembly and Peaceful Procession Law following a peaceful gathering of several hundred protesters on May 3 and 4 in Myitkyina Township, Kachin State. Each paid a fine of 30,000 Myanmar Kyat (around US$22). Their cases are closed.

Organizers planned a march of an estimated 500 protesters from Tamwe Township to Sule Pagoda in Yangon on May 12. However, on May 10, after receiving information on May 9 from the organizers of the proposed march, Tamwe Township Police Officer Hla Phone Kyaw told the organizers that the march could not proceed due to security concerns and the risk of affecting traffic in the area.

“The Government should be protecting the right of people to assemble peacefully,” said Matthew Smith. “Instead they’re taking aim at anyone who doesn’t toe their line.”

On November 7, 2017, Yangon Region Security and Border Affairs Minister Colonel Aung Soe Moe issued a directive banning peaceful assemblies in 11 townships in Yangon due to the possibility of “public annoyance and anxiety.” The directive remains in place.

Under Myanmar’s Peaceful Assembly and Peaceful Procession Law, organizers of a peaceful protest are required to give notice of a planned assembly or procession 48 hours in advance and provide information on the “topic” of the assembly and the “slogans” that will be used. Speech that “affects the State or the Union, race, or religion, human dignity, and moral principles” is prohibited. Protesters also “must not obstruct or disturb vehicles, pedestrians, and people.”

International human rights law provides that states have an obligation to protect the rights to freedom of peaceful assembly and expression. States may only restrict peaceful assemblies when restrictions are provided by law, proportional, and necessary to accomplish a legitimate aim. Criminal penalties for peaceful protests that temporarily block access to a public building or roads are considered disproportionate under international law.

In a joint report to the Human Rights Council in February 2016, the U.N. Special Rapporteur on the Rights to Freedom of Peaceful Assembly and Association and the Special Rapporteur on Extrajudicial, Summary or Arbitrary Executions also stated that, “[w]here there has been a failure to properly notify, organizers, community or political leaders should not be subject to criminal or administrative sanctions resulting in fines or imprisonment.”

Myanmar’s Peaceful Assembly and Peaceful Procession Law contravenes international law by allowing police to disperse an assembly for failing to give notice, and by giving the government control over the “topic” of the assembly and “slogans” permitted. Myanmar law also allows people organizing or participating in a peaceful assembly to be held criminally liable, contravening international human rights law.

The Government of Myanmar should amend the Peaceful Assembly and Peaceful Procession Law to bring it in line with international standards and ensure it protects the rights to peaceful assembly and expression, said Fortify Rights.

On May 8, Dr. Win Myat Aye, Myanmar’s Minister for Social Welfare, Relief and Resettlement, told Radio Free Asia: “Citizens’ safety is the government’s responsibility . . . We can’t take citizens to safe places without the military’s help. We have to work with the military to take people to safe places.”

The Myanmar military has also reportedly denied aid groups access and the delivery of aid to the displaced population in Kamai sub-township and Tanai Township for several weeks.

On May 1, U.N. Special Rapporteur Yanghee Lee issued a statement noting, “Any willful impediment of relief supplies may amount to war crimes under international law.”