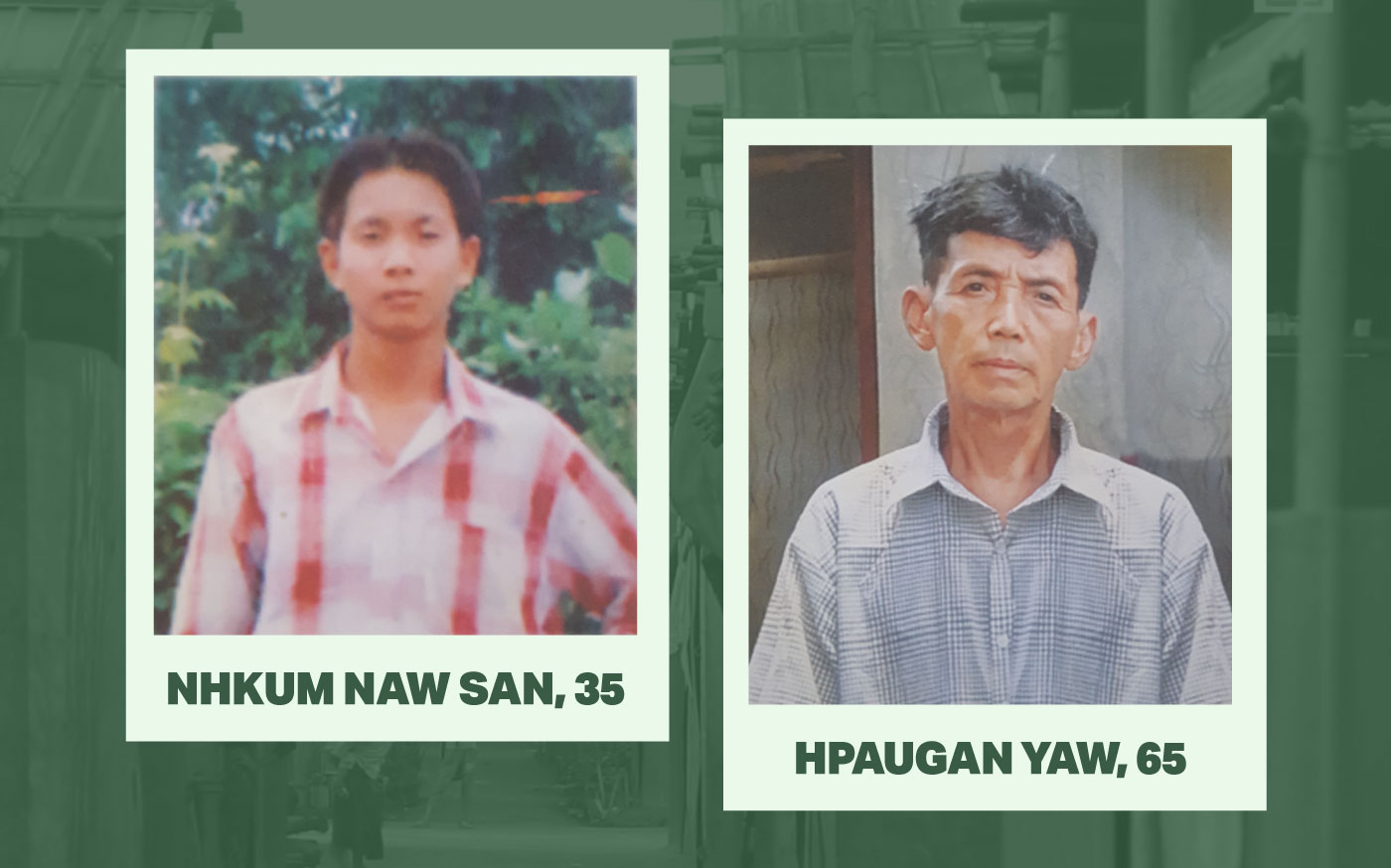 (YANGON, April 19, 2018)— Myanmar authorities should immediately account for the killings of ethnic-Kachin civilians Hpaugan Yaw and Nhkum Naw San, Fortify Rights said today. The Myanmar military should also drop charges against a victim’s family member who called for accountability in the case.

“There’s a decades-long trend of impunity for killings in Kachin State,” said Matthew Smith, Chief Executive Officer of Fortify Rights. “The government’s refusal to cooperate with U.N. Fact Finders unfortunately paved the way for these types of violations to continue.”

On March 8, residents of Maing Hkawng village found the bodies of Mr. Hpaugan Yaw, 65, and Mr. Nhkum Naw San, 35, with exit wounds at the back of their heads and near where eyewitnesses had last seen the two men. Eyewitnesses told Fortify Rights that they last saw the men at around midday on January 31 in the custody of Myanmar Army soldiers and with their hands bound behind their backs. Nhkum Naw San’s face was swollen and bruised. One eyewitness told Fortify Rights that Myanmar Army soldiers had dressed Nhkum Naw San in the uniform of the Kachin Independence Army (KIA)—an ethnic armed group currently in active conflict with the Myanmar military— and attempted to dress Hpaugan Yaw in a KIA uniform. She heard two gunshots shortly after last seeing the two men.

On March 9, following the discovery of their bodies, family members of Hpaugan Yaw and Nhkum Naw San filed a complaint at Mansi Township Police Station, demanding an investigation into the killing of the two men. On March 13, the Kachin State Government launched an investigation, questioning the families of the two men at Mansi Township General Administration Office as well as four eyewitnesses who saw Hpaugan Yaw and Nhkum Naw San in the custody of the Myanmar Army.

According to a document seen by Fortify Rights, on March 19, Myanmar Military Operations Command-20 Captain Kyaw Htun Aung filed a complaint at Mansi Township Police Station, accusing Hpaugan Yaw’s daughter-in-law Kaw Awng of violating article 17/1 of the Unlawful Associations Act. The complaint alleges that Kaw Awng failed “to report to police and military, despite her knowing that U Hpaugan Yaw and Dauji Naw San were KIA insurgents and having contact with an unlawful association.” Kaw Awng faces up to three years in prison and a fine if convicted of unlawful association.

In the document, Captain Kyaw Htun Aung alleges that Hpaugan Yaw, Nhkum Naw San, and two other “Kachin insurgents” opened fire on Myanmar Army Infantry Battalion 105 at around 1:45 p.m. on January 31 after the latter arrived to a site east of Hkat Pra village, Mansi Township. According to Captain Kyaw Htun Aung, “The Tatmadaw unit returned fire at the insurgents and then proceeded to search the farm hut when they found a body, in green military fatigue, about 100 meters from the hut and another body in KIA uniform inside the hut…”

The Government of Myanmar should urgently ensure the safety of the victims’ families and eyewitnesses to their abduction, Fortify Rights said.

Customary international law and numerous international treaties protect the rights to freedom of expression and an effective remedy for human rights violations. International law also protects individuals who challenge human rights violations. The U.N. Declaration on Human Rights Defenders states that everyone has the right to “complain about the policies and actions of individual officials and government authorities with regard to violations of human rights and fundamental freedoms” and that states shall take action to “ensure the protection by the competent authorities of everyone…against any violence, threats, retaliation…pressure or any other arbitrary action as a consequence of his or her legitimate exercise of [these] rights.”

International humanitarian law also requires detaining authorities to treat prisoners of war humanely in all circumstances. Prisoners are entitled to protection against any act of violence or mistreatment. Executing prisoners of war is a war crime.

Fighting between the Myanmar military and the KIA has displaced more than 100,000 civilians since 2011, including thousands this year. On April 17, Kachin civil society groups reported that an estimated 1,200 civilians from Awng Lawt, Sut Ring Yang, and Sut Ra Yang villages in Tanai Township fled fighting in recent days. In the last several years, Kachin civil society organizations, Fortify Rights, and others have documented serious human rights violations by Myanmar Army soldiers in Kachin State, including killings, rape, torture, human shielding, and the denial of humanitarian assistance to displaced populations. The KIA has also committed abuses, including through the use of landmines and the recruitment and use of child soldiers.

On March 24, 2017, the U.N. Human Rights Council passed a landmark resolution creating an independent, international Fact-Finding Mission into allegations of human rights violations and abuses in Myanmar, including in Kachin State. The Government of Myanmar barred the experts from entering the country and refused to cooperate with them. On May 25, 2017, 59 Myanmar-based civil society organizations called on the government to cooperate with the mission.

“The military is suing a bereaved family member for demanding justice— it’s that simple,” said Matthew Smith. “We strongly encourage the government to ensure the safety of the families and eyewitnesses involved in this case and to cooperate with all efforts to prevent and remedy human rights violations.”