Myanmar/Bangladesh: Video Provides Evidence of Crimes Against Rohingya in Myanmar 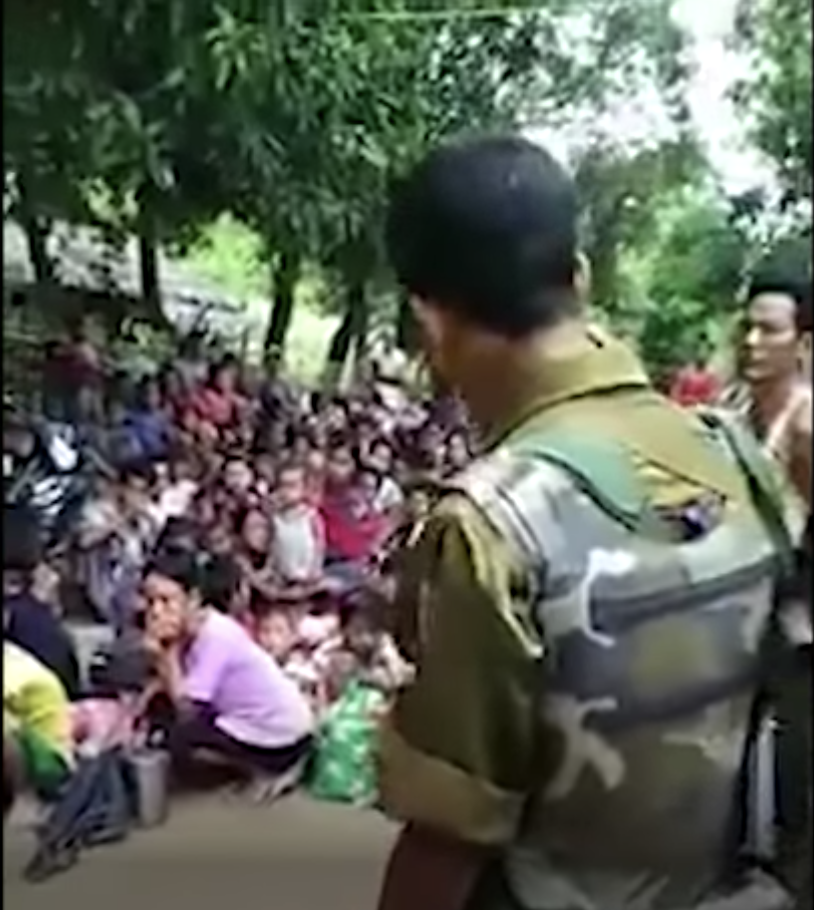 (COX’S BAZAR, September 27, 2018)—Recently-analyzed mobile phone footage provides important evidence for the International Criminal Court to consider as it assesses whether Myanmar authorities are responsible for international crimes against Rohingya civilians in northern Rakhine State, Fortify Rights said today. In a new short film released today, Fortify Rights exposed footage of a Myanmar Army soldier explaining to a group of civilians how the authorities would “clear out” Rohingya villages, providing evidence of the crime against humanity of deportation.

“Myanmar authorities consistently claim they didn’t force Rohingya from their homes, and this footage shows a soldier explaining in detail that the authorities would indeed force Rohingya out of their villages,” said Matthew Smith, Chief Executive Officer of Fortify Rights. “We hope this will be of use to ICC prosecutors and others pursuing justice for the Army’s wanton attacks on civilians.”

The original footage is eight-minutes and 40 seconds and first appeared online on August 28, 2017, three days after Myanmar Army-led “clearance operations” against Rohingya in northern Rakhine State began. The operations forced more than 700,000 Rohingya into Bangladesh.

In a historic decision on September 6, the ICC granted jurisdiction for the prosecutor to investigate and possibly prosecute the crime against humanity of deportation of Rohingya to Bangladesh as well as persecution and other inhumane acts. On September 18, ICC Prosecutor Mrs. Fatou Bensouda announced her office had opened a preliminary examination into the allegations. In a report released on September 18, a United Nations Fact-Finding Mission mandated by the U.N. Human Rights Council to investigate human rights violations against Rohingya found evidence of the crime of genocide.

The footage released today shows an unknown Myanmar Army soldier in body armor and uniformed fatigues addressing in Burmese language a group of non-Rohingya residents in a rural location believed to be in northern Rakhine State. Insignia on the soldier’s uniform that would identify his military rank and unit affiliation is indistinguishable due to poor video quality.

“We’re going to crack down on them severely and fast,” the soldier says in the footage, speaking about Rohingya. “No worries about that. We’ll clear out their villages soon after we leave here.”

The solider portrays all Rohingya as posing an existential threat to Myanmar, telling his audience “they will conquer the whole country,” adding: “These guys have a high breeding population rate and high population growth, so they threaten our ethnic minorities here with their population.”

In a 160-page report published in July, Fortify Rights documented how soldiers, police, and local non-Rohingya citizens hacked Rohingya civilians, slit throats, and fatally shot and burned thousands of men, women, and children in a matter of weeks beginning on August 25, 2017. Soldiers raped masses of Rohingya women and girls, killed infant children, arbitrarily arrested men and boys, and destroyed several hundred villages in arson attacks. Fortify Rights identified 22 military and police officials who should be investigated and possibly prosecuted for the crime of genocide. Fortify Rights also documented human rights violations by Rohingya militants, including killings of and threats against civilians.

During the army-led “clearance operations,” non-Rohingya citizens worked in concert with Myanmar Army soldiers in attacks against Rohingya civilians.

In the footage released today, the soldier appears to incite local residents, including children, to join attacks against Rohingya.

“When we are working like this, people from this village need to cooperate with us,” the soldier tells the audience of civilians. “To show our courage, hold swords, hold sticks, even elders or young kids must defeat them.”

Fortify Rights and others have called on the U.N. Security Council to refer the situation in Myanmar to the ICC to investigate the full spectrum of atrocity crimes in Myanmar, including crimes in Rakhine, Kachin, and Shan states.

“The international community must act fast and take every approach possible, including by establishing a new mechanism to collect and preserve evidence for prosecutions,” said Matthew Smith. “There’s no excuse for Security Council inaction. It should refer the situation in Myanmar to the ICC without delay.”