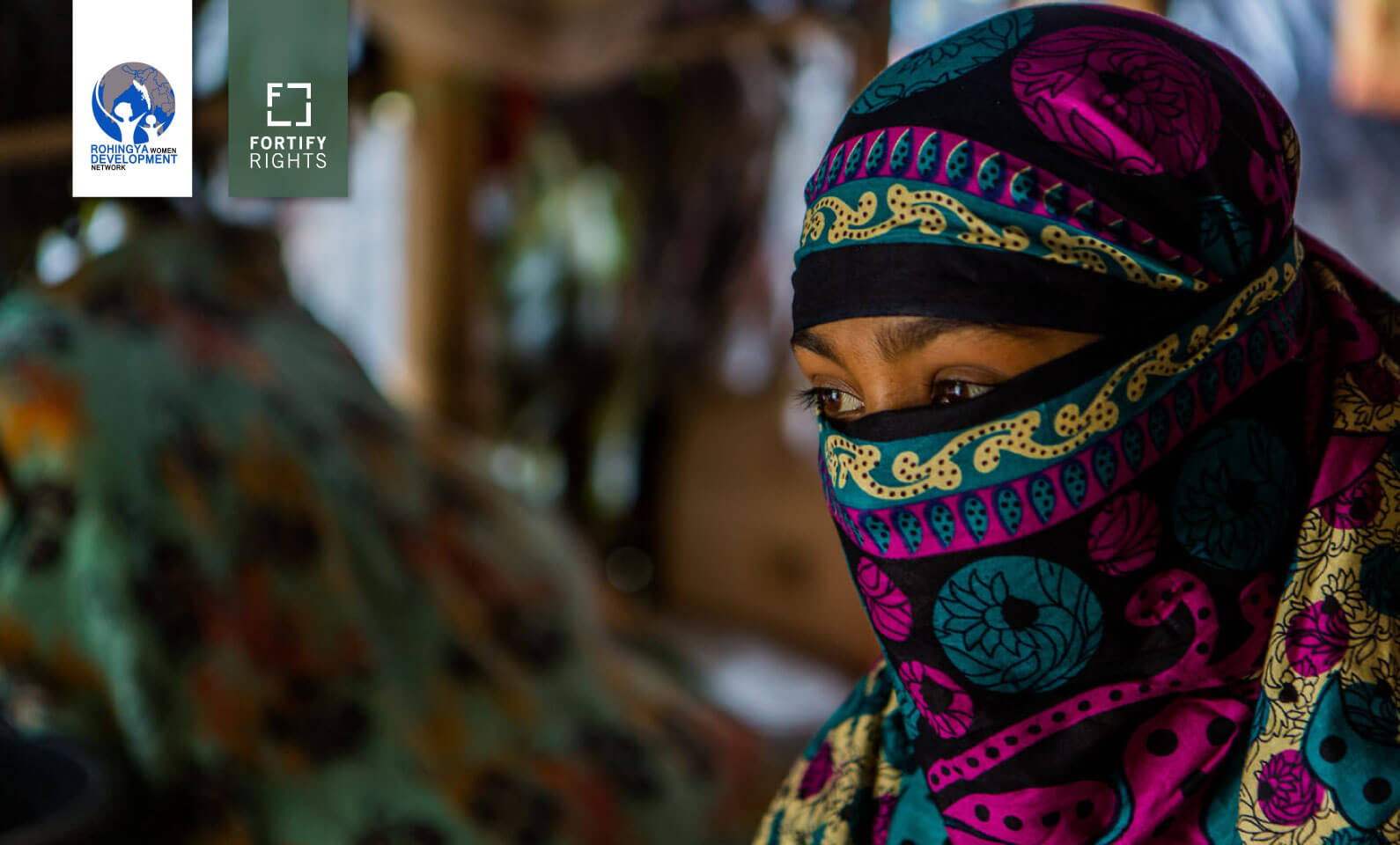 (Kuala Lumpur, February 21, 2019) — The Government of Malaysia should provide refugees with the rights to work and access education in order to end child marriage and ensure protections for refugee girls, said the Rohingya Women Development Network (RWDN) and Fortify Rights today.

Malaysia Foreign Minister Saiffudin Abdullah said on Tuesday that the government is considering options to provide refugees with access to public schools, hospitals, and employment.

“Children should be in school, not forced into marriage,” said Sharifah Shakirah, founder and director of RWDN in Malaysia. “We encourage the Malaysian government to urgently ban child marriage and provide refugee families with legal access to jobs, schools, and health care, which would advance refugee and child rights.”

“I am physically and verbally abused by my husband,” a Rohingya refugee girl, 16, told RWDN and Fortify Rights in Kuala Lumpur, Malaysia on February 1, 2019. “I want an education. I want to be a teacher. I am not happy about getting married.”

Originally from Buthidaung Township in Myanmar’s Rakhine State, the 16-year-old girl married a 24-year old Rohingya man in Malaysia on January 1, 2018. The girl’s family arranged the marriage due to financial difficulties. She told RWDN and Fortify Rights that she is now confined to a one-bedroom apartment in Kuala Lumpur where she cooks and cleans, describing slave-like conditions in a situation of domestic servitude.

“I don’t leave the house,” she told RWDN and Fortify Rights. “I stay in this room all day.”

Another Rohingya refugee girl in Kuala Lumpur, 15, told RWDN and Fortify Rights in February that she wants to leave her husband and not be married:

Fortify Rights and RWDN spoke with the Rohingya girl about referral options to a shelter and trained social worker.

RWDN is a first point of contact for many Rohingya women and girls in need of protection and services in Kuala Lumpur. The Rohingya women-led organization provides vocational training, education, sports, and assistance accessing service providers in Malaysia.

“The Malaysian government has the ability and resources to ensure protection for Rohingya refugee girls,” said Amy Smith, Executive Director of Fortify Rights. “Governments should put the best interest of the child above all, and the refugee community should do the same and resist pressures and harmful traditions in marrying off children.”

“In Myanmar, it’s very expensive for girls to get married because of the dowry system, but men here [in Malaysia] have to pay a bride-price for Rohingya girls and women to come to Malaysia to get married,” a Rohingya refugee woman originally from Buthidaung Township in Myanmar’s Rakhine State told RWDN and Fortify Rights. “Girls are risking their lives to come here [Malaysia] for marriage.

A Rohingya refugee man, 28, originally from Maungdaw Township in Myanmar’s Rakhine State, arrived in Malaysia by boat in 2015 after being held captive in a human trafficking camp on the Thailand-Malaysia border. He married a Rohingya child in Kuala Lumpur in 2017. He told Fortify Rights and RWDN:

The United Nations High Commission for Refugees (UNHCR)—the U.N. agency mandated to protect refugees—estimates that there are more than 88,000 Rohingya refugees in Malaysia as of December 2018.

Untold numbers of Rohingya-refugee women and girls in refugee camps in Bangladesh are planning to travel by boat to marry Rohingya men in Malaysia due to avoidable deprivations in food, shelter, and livelihood opportunities as well as threats in Bangladesh. Rohingya men and other “buyers” in Malaysia typically pay fees to human traffickers to transport Rohingya girls from Bangladesh or Myanmar to Malaysia by sea in addition to a “bride price” to the family of the girl. Many Rohingya families regard this a viable option to escape harsh realities in Myanmar or refugee camps in Bangladesh.

In November 2018, Fortify Rights spoke with two Rohingya refugee women in Bangladesh, including a Rohingya woman planning to send her 14-year-old daughter to Malaysia for marriage. The mother explained how the Rohingya man in Malaysia would pay all transport costs and already began to send money to her and her family in Bangladesh.

“We do not have enough food here in Bangladesh,” she told Fortify Rights in November 2018. “If we need medical treatment, then it is very difficult in the camps . . . I want to send my daughter to Malaysia to marry because we don’t have money.

A 15-year-old Rohingya refugee girl, who was waiting to board a boat she believed would transport her to Malaysia in order to marry a Rohingya man, told Fortify Rights that the marriage would help her family financially. She said:

Travel by sea from Bangladesh and Myanmar to Malaysia is often deadly. At least hundreds of Rohingya refugees died at sea in recent years when ships capsized, and most ships transporting Rohingya are operated by criminal syndicates, which bring risks of violence and abuse. From 2013 to 2015, Fortify Rights documented how traffickers raped, killed, and beat refugees at sea and deprived them of adequate space, food, and water.

In May 2015, the Malaysian authorities discovered 139 graves believed to contain the bodies of Rohingya and Bangladeshi victims in 28 suspected human-trafficking camps in Wang Kelian in Malaysia’s Perlis State located on the Thailand-Malaysia border. Malaysian authorities prosecuted only four perpetrators in connection with the graves at Wang Kelian and faced allegations of a cover up.

Fortify Rights, SUHAKAM [Malaysia Human Rights Commission], Lawyers for Liberty, and others have called on the Malaysian authorities to investigate the mass graves and human trafficking. In January 2019—eight months after Pakatan Harapan won the 14th General Elections in a landmark victory, ending six-decades of rule by Barisan Nasional—the Government of Malaysia under Prime Minister Tun Dr. Mahathir Mohamad announced it would create a Royal Commission of Inquiry to investigate the mass graves and trafficking at Wang Kelian.

In addition to investigating the mass graves, the Royal Commission of Inquiry should investigate the connection between human trafficking of Rohingya and child marriages, said RWDN and Fortify Rights.

“The new government has the political will to intervene in specific cases,” said Amy Smith. “We encourage the government to make the necessary legislative changes to tackle trafficking and end child marriage, including providing refugees with the rights to work, education, and health care.”

Malaysia is state party to the U.N. Convention on the Rights of the Child (CRC) and Convention on the Elimination of All Forms of Discrimination Against Women (CEDAW), core international treaties that protect the human rights of women and girls. The CRC Committee defines “child marriage” as any marriage where either one or both partners are below 18 years of age. International standards set 18 as the minimum age for marriage for both parties, regardless of parental consent.

Although Malaysia withdrew a longstanding reservation to Article 16(2) of CEDAW, which does not legally allow for “the betrothal and the marriage of a child,” Malaysia has yet to codify protections to prevent child marriage in domestic law.

Malaysia has a dual legal system, with civil law and Sharia law. Civil law sets the minimum age of marriage at 18 for non-Muslims, but girls aged 16 and older can marry with the permission of their state’s chief minister. For Muslims, Islamic law sets a 16-year minimum age for girls and permits even earlier marriages, with no apparent minimum, with the permission of a Sharia court. It is under the discretion of judges in determining whether an application should be approved.

The Pakatan Harapan coalition government’s election manifesto committed to setting 18 as the minimum age of marriage. RWDN and Fortify Rights urge the Malaysian government to urgently increase the legal age of marriage to 18 years for women and men for both civil and Muslim marriages, without exceptions.

Refugees do not have access to legal status or basic rights and protections in Malaysia and are at particular risk of indefinite detention, exploitation, and potential forced return. Although the Government of Malaysia has not ratified the 1951 U.N. Refugee Convention and fails to recognize or provide formal protection to refugees, the current Pakatan Harapan coalition government specifically included in its election-campaign manifesto a promise to “ratify the 1951 International Convention on Refugees so that refugees who escape from war-torn countries and arrive in Malaysia are given proper assistance.”

“Our community are survivors of genocide and we have rights and need protection, particularly our women and children,” said Sharifah Shakirah. “We aren’t asking the authorities for anything more than our basic human rights.”